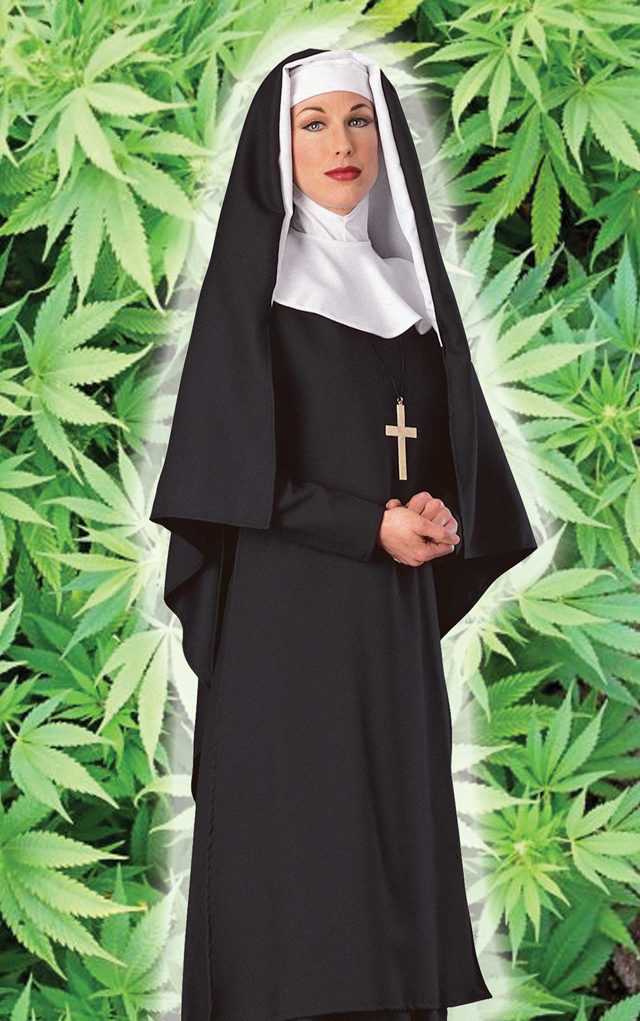 I was sent an intriguing story earlier this week about a group of nuns in the San Joaquin Valley in California who are growing CBD-only marijuana and turning it into salves, tinctures, soaps and other medicinals.

And they’re doing pretty well at it. According to a story by Melia Robinson of Tech Insider, as of last March, they were making $40,000 a month selling their wares.

They call themselves The Sisters of the Valley. They are not a Catholic order. They are an Occupy Wall Street order.

“The order was given birth by the Occupy movement,” says Sister Kate (aka Cannabis Kate), whose previous name is Christine Meeusen. “Our origins are in protesting. While out with the people, the formalization of this order came as a result of so many people asking for it — from so many asking for an order that has, as its holy trinity — service, activism and spirituality.”

And one other thing: They consider themselves to be Beguine revivalists.

The Beguines (pronounced as in begin the Beguine) were Christian lay women in the Middle Ages. They lived in semi-monastic communities but did not take formal religious vows. They promised not to marry as long as they lived as Beguines, but were free both to leave the community at any time and to rejoin it.

“The Beguines pre-dated Christianity,” she says. “And though they lived together, dressed alike and prayed together, their mission was not to spread any kind of dogma. Their mission was to rescue women from poverty and give them independence and property (wealth). They were very good at it.”

It all began in 2011 when Meeusen began dressing as a nun during the height of the Occupy Wall Street movement to protest Congress declaring pizza a vegetable, according to Tech Insider. (I’m with her on that; it’s a sacrament, along with beer.) The media dubbed her “Sister Occupy” and she went with it, eventually striking out to start her own order.

The Sisters of the Valley was started two years ago by Sister Kate and 24-year-old Sister Darcy (Johnson), who were introduced by a mutual friend. Today the order/business “has nine folks working full-time and another nine to twelve in various specialty positions and this all began from five thousand anarchist, activist, Facebook friends,” says Sister Kate.

The sisters — they prefer to call themselves sisters instead of nuns — make it clear that they are not in any way associated with the Catholic Church, but the Church doesn’t have a copyright on the word “nun.”

The order’s theology seems to be a work in progress, with a strong New Age influence. Their cannabis products are made in accordance with lunar cycles, for instance. But they do have a mission statement that says their fundamental mission “is to get plant-based medicine into the hands of those in need… to honor Mother Earth and her intelligent plant, provide a valuable product to the people, empower other women to succeed and participate in peaceful progressive activism.”

The also have six vows, which they take for life:

2. Obedience — to the Moon Cycles and planting cycles, to the goals of the Sisterhood.

3. Activism — to dedicate time each week to progressive activist causes that best benefit the economic conditions of the poor surrounding us.

4. Ecology — to honor Mother Earth in all we do, to do no harm during medicine-making periods.

5.  Chastity — dress and behave to honor the work we do, to honor our ancestors and our people.

6. Simplicity — a life of living simply (one car, one bedroom, one house, one TV set) — we do not believe it is necessary, with the wise, just, and ample distribution and use of Mother Earth’s gifts, for anyone to live in poverty. As activists, we fight for the $15 minimum wage and work hard to create honorable jobs for the local people.

If all this sounds a bit quirky, it’s worth recalling that every religion on the planet asks its followers to take a lot on faith. And a religious order built around the healing properties of cannabis has this much going for it: its claims can be tested by science, which is more than can be said for the core beliefs and creation myths of every major religion on the planet.

The Sisters’ habit consists of denim skirts, white blouses and a white head covering. It bears a family resemblance to a Catholic nun’s habit but is deliberately different.

There’s something else that they do differently, too: They pay taxes and have no interest in being a tax-exempt order. That’s because they practice for-profit marijuana capitalism in order to raise money for their mission.

That alone is enough to turn an atheist into an agnostic.