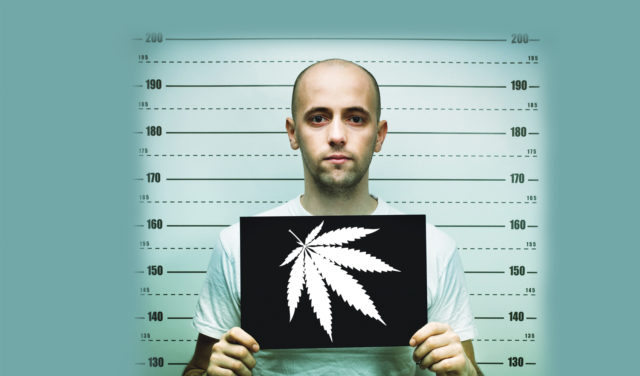 It’s a nice thought to imagine the end of the cannabis prohibition being a single event. It would be a satisfying final concession from the federal government, opening the floodgates of regulation across the U.S. People would be released from prison for nonviolent cannabis convictions, records would be expunged and cannabis businesses could operate without being subject to 280E (see Weed Between the Lines, “For internal use only,” April 22, 2021). We’d all spark up fatties and dance through the streets celebrating sweet, sweet victory at last.

That’s a pipe dream, though, according to Paul Armentano, the deputy director of the National Organization for the Reform of Marijuana Laws (NORML). The black market for cannabis isn’t going anywhere any time soon, Armentano says; largely because of states where cannabis is illegal. Which means that cannabis drug busts and arrests will continue to feed our prison system for the foreseeable future.

We’re seeing this happen presently. Even though 19 states, Washington D.C. and Guam have all recreationally legalized cannabis, cannabis busts and arrests skyrocketed in 2021. Federal law enforcement and their partners seized over 5.5 million pounds of cannabis in 2021, a 22% increase over the 2020 numbers. They also made 6,606 cannabis arrests, 32% higher than in 2020.

“The drug war isn’t over,” Armentano says. “Despite the reality that most Americans want to see cannabis legal, in many jurisdictions in this country, and under federal law, it remains illegal, and that law is enforced in many parts of the country.”

Armentano speculates that 2021’s dramatic increase in seized plants and cannabis arrests has to do with California Gov. Gavin Newsom’s recent promise to crack down on illegal cannabis grows in his state. Even though cannabis is legal there, California is still the largest source of black market cannabis, producing roughly 80% of all marijuana illegally sold in the US (see, Weed Between the Lines, “Fighting the dark side of cannabis,” Dec. 23, 2021).

“At the end of the day, what’s being discussed at the federal level are plans to remove cannabis from its federal schedule I classification, which will thereby leave the decisions with regard to the legal status of cannabis up to each individual state,” Armentano points out. If (or hopefully when) the feds do that, those holdout states will probably come around to legalizing cannabis in some form eventually.

“But it’s not going to all happen at once,” he says. “There are still going to be jurisdictions in this country where there remains a high public demand for cannabis, but where cannabis still remains an illicit commodity to produce and to sell within the borders of that state.”

Armantano likens it to the prohibition of alcohol. While the federal government officially ended prohibition in 1933, it was still up to states to decide whether and how they wanted to legalize alcohol consumption. Some states chose to remain dry for decades afterwards—Mississippi, the last state to repeal its prohibition laws, didn’t do so until 1966.

Simply spending large sums of taxpayers dollars to increase cannabis arrests by 32% and stings by 22% isn’t going to solve that problem. Like a hydra, more black market producers will show up to replace the ones that go to jail. As long as there’s a demand that isn’t being satisfied by the legal market, there’s always going to be illicit producers clamoring to meet it with their own supply.

However, short of the U.S. government going into every state and demanding that their legislatures legalize cannabis, that’s not a problem that’s ever going to be treated at its source.

“The black market can certainly be disrupted, but the black market is not going to go away entirely, certainly not in an environment where we have a patchwork system, where in some states this is a legal commodity, and in other states it still is not,” Armantano says.

Email the author at wbrendza@boulderweekly.com