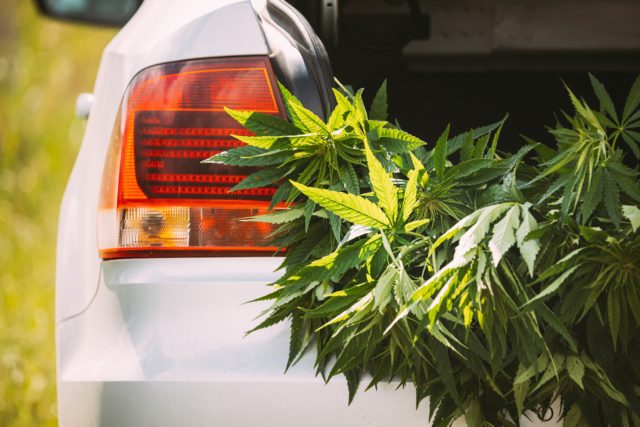 Rhet Smith had just finished presenting a study he’d co-authored on the relationship between cannabis and traffic fatalities at the University of Georgia when he was approached by another researcher. The paper Smith had just presented had found that traffic fatalities in states with legal medical marijuana had actually decreased with legal weed, contrary to what almost everyone would have expected.

But the other researcher, Cameron Ellis, saw a hole in Smith’s first traffic safety paper. Or, at least, a missed opportunity.

“He approached me and was like, ‘Well, you’re missing a lot of crashes and you’re missing a lot of the costs or benefits,’” Smith says. Ellis, who teaches economics and studies insurance at the University of Iowa, pointed out that only .5% of traffic crashes involve fatalities. Which meant that Smith was missing 99.5% of the data on this topic.

“What if we looked at this through the insurance aspect of things?” Ellis suggested.

Smith agreed, it was a great idea. More data yields more robust results. So the two researchers teamed up and embarked on another study, based on the first, asking the question: How does legalized medical cannabis affect an area’s car insurance premiums?

Smith’s first study on medical cannabis legalization and traffic fatalities wasn’t the first to examine that relationship, he admits. He points to several others, including one by Dan Rees of the University of Colorado at Boulder, published in the Journal of Law and Economics earlier in 2022. Similarly to Smith’s first paper, Rees’ study, titled “Medical Marijuana Laws, Traffic Fatalities, and Alcohol Consumption,” found that the first full year after it went into effect, the legalization of cannabis was associated with an 8-11% decrease in traffic fatalities. Not only that, but according to Rees’ research, legalization was also associated with sharp decreases in alcohol consumption.

“A lot of the literature actually finds that in these areas that do legalize medical cannabis, you have these declines in fatal traffic crashes,” Smith says.

For the second paper he co-authored with Ellis, they looked at zip code-level survey data on auto insurance premiums from the S&P Global Market Intelligence database, as well as auto insurers’ financial data from the National Association of Insurance Commissioners (NAIC). Instead of focusing on just the .5% of auto accidents that result in a fatality, they were going to look at all traffic accidents in all 50 states by comparing auto insurance premiums between those that were still enforcing cannabis prohibition, and those that had legalized medical cannabis.

“Legalizing medical cannabis reduces annual auto insurance premiums by $22 per household, a reduction of 1.7% for the average household,” the study reads. “While this reduction may be inconsequential to an individual policyholder, the aggregate effects are economically meaningful.”

Annually, that’s $50 million saved in premiums. All told, since medical legalization began, that’s reduced auto insurance premiums by $1.5 billion in the states that have legalized, nationally.

Contrary to what anti-cannabis groups would have you believe, the study concludes that legalization positively impacts auto safety.

“The effect really isn’t intuitive,” Smith says. “But then you start to think, ‘OK, so how could that be happening?’”

Part of it could be that legal cannabis laws require people to use cannabis at home, Smith suggests. They’re buying it at a store, then going back to their place to use it instead of driving to their dealer’s pad, or to a park to have a sesh with the homies.

“You can’t be involved in a traffic crash if you’re at home,” Smith points out. “That was one of the main channels for how traffic safety could be improving, is that there’s less and less impaired driving that’s occurring essentially.”

Another factor that could (and likely is) contributing to their results is the substitution effect—people who would otherwise be drinking but are using cannabis instead.

“If you’re substituting away from alcohol,” Smith reasons, “then that’s going to have this net improvement in traffic safety.”

For policy makers and constituents, that should be an attractive reason to legalize cannabis in every state. Not only will it save people money, but legalization legitimately makes the roads safer and could even save lives.

“The takeaway here is . . .  we’re looking at a potential spillover effect,” Smith says. “So regardless of whether or not you partake or whether you need that drug for medical treatment, there’s still a benefit to you.”