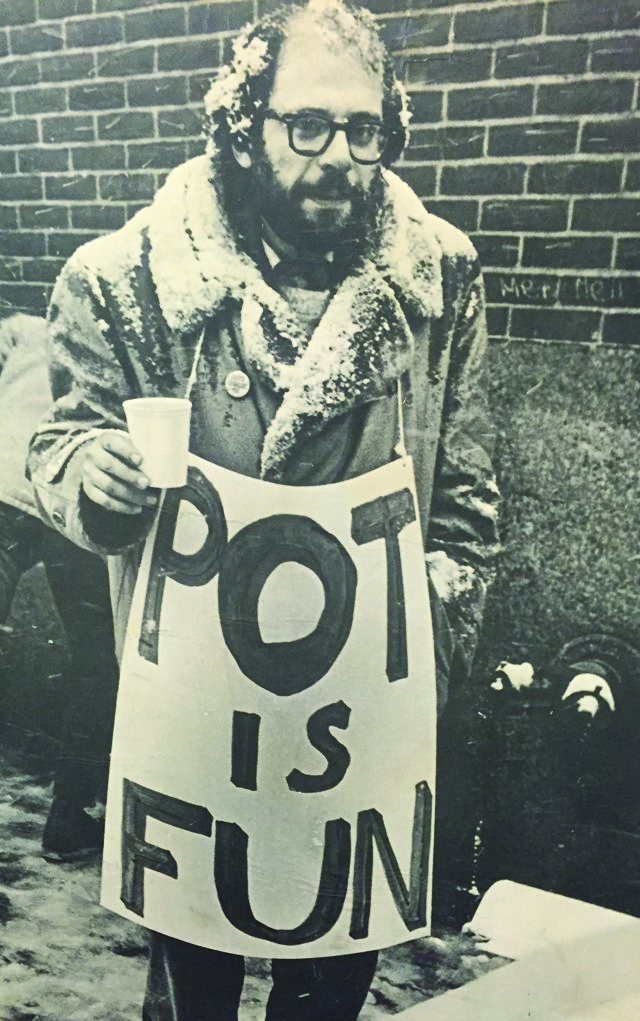 With the fall equinox approaching, the second coming of the summer of love is coming to an end. The first summer of love was in 1967 when, just like in 2016, there was a strawberry moon, a twice in a lifetime event when the summer solstice coincides with a full moon

In 1967, the summer of love was a social phenomenon — a generational upwelling of free love utopianism that culminated in a gathering of as many as 100,000 people in the Haight-Ashbury neighborhood of San Francisco for a peace-in that was likely the largest group of people to ever drop acid at the same time.

Last week, I found myself walking those same San Francisco streets following in the familiar footsteps of the Beat Generation writers that I grew up with in Boulder as I passed by iconic hangouts of these great cultural explorers. To add some historical context to my wanderings, I paid the $5 admission to the Beat Museum and once inside found myself staring a picture of Allen Ginsberg donning a sign that read “Pot is Fun.”

Ginsberg, co-founder of the Jack Kerouac School of Disembodied Poetics at Naropa University, had a history of advocacy for the legalization of marijuana. He didn’t buy into anti-marijuana campaigns, which he considered nothing more than propaganda. He founded the New York City chapter of LeMar (Legalize Marijuana) and frequently led demonstrations demanding the release of prisoners incarcerated for marijuana use or possession.

As a writer and wordsmith, Ginsberg’s dissent often went beyond legalization into the semantics at play in drug culture. In “The Great Marijuana Hoax,” an essay that first appeared in Atlantic Monthly in 1966, he makes a fundamental distinction between the concept of a drug, an easy escape, and an agent, an opportunity to experience true expansion of consciousness.

“The actual experience of the smoked herb has been clouded by a fog of dirty language perpetrated by a crowd of fakers who have not had the experience and yet insist on downgrading it,” he wrote. “The paradoxical key to this bizarre impasse of awareness is precisely that the marijuana consciousness is one that, ever so gently, shifts the center of attention from habitual shallow, purely verbal guidelines and repetitive secondhand ideological interpretations of experience to more direct, slower, absorbing, occasionally microscopically minute engagement with sensing phenomena.” (Emphasis Ginsberg’s.)

Ginsberg was endlessly curious about the source of fear for plant-based hallucinogens in society and even discussed the subject in a May 1971 National Public Radio debate with his father, Louis Ginsberg. Both agreed that marijuana should be decriminalized, but his father still held severe convictions about the detrimental effect of drugs on users and expressed concern for his son.

“Drugs at the hands of the youth are a species of burglarizing the personality,” the elder Ginsberg said. “They embezzle the development of youth because many of the young people in copping out or being unable to cope with the complexities of our modern civilization, instead of thinking and struggling through they will take drugs to escape the reality … But ultimately I say to Allen, as a father, I don’t want him to get messed up with the police, I want him to avoid being the victim of an unjust law.”

To this Ginsberg replies: “What it finally boils down to is that the fear is not about the drugs but about the police.”

Ginsberg became convinced that the U.S. government was somehow involved in international illegal drug trades, and he wrote many essays detailing his research and theories about the CIA’s involvement in trafficking.

But, again and again his accusations were denied and his writings rejected by publications as editor after editor refused to recognize his position as legitimate, only hastening the urgency he felt. Eventually in 1978 he received a note from an editor at the New York Times apologizing for not taking his ideas more seriously.

Ginsberg’s practical and political advocacy was complemented by his appreciation of what marijuana did for the soul. In response to claims that cannabis induced laziness and brought disruption to social efficiencies, Ginsberg argued that it brought a much needed slowing of time and opportunity to enhance perception of the world.

“Marijuana is a useful catalyst for specific optical and aural aesthetic perceptions,” he wrote in “The Great Marijuana Hoax.”

“I apprehended the structure of certain pieces of jazz & classical music in a new manner under the influence of marijuana, and these apprehensions have remained valid in years of normal consciousness … And I saw anew many of nature’s panoramas & landscapes that I’d stared at blindly without even noticing before; thru the use of marijuana, awe & detail were made conscious.”

In 1967 the Beats were the voice of 100,000 people who took acid and smoked pot in San Francisco to access a new way of experiencing the world. Nearly 50 years later we are experiencing a shift in drug policy as, state by state, the U.S. undergoes a wave of legalization. Ginsberg argued that decriminalizing marijuana is a step in the right direction. But his substantial interest lies not in utility but in the freedom to choose to experience an altered state of mind — to expand consciousness, increase awareness and shift perception.