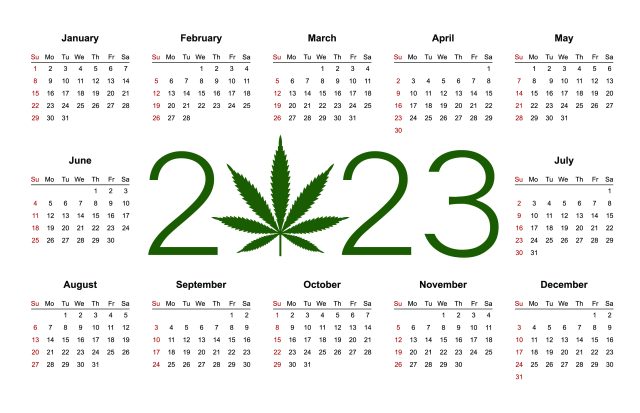 The fight to end cannabis prohibition continues to be fought, and won, across the country. Every single year more states hop aboard the legalization train, and the nation creeps closer toward finally descheduling, decriminalizing or maybe even fully legalizing cannabis.

We’re getting there. It’s been a long slog, one that’s been ongoing for generations. But the levy is showing cracks — at this point, you could even say it’s leaking. And with a little luck, it might be on the verge of failure.

The last 12 months moved us significantly closer toward that goal. It also set the board up for even more progress to take place next year. But there are hurdles yet to overcome — some that have always been there, and others that are only now developing.

In November 2022, three more states voted to legalize cannabis. Rhode Island and Missouri will have legal, recreational cannabis come Jan. 1, 2023, and Maryland will come online July 1, 2023. That will bring the grand total number of states with legal recreational cannabis to 22 (not including Guam, the Northern Mariana Islands, and D.C., all of which have recreationally legalized). Another 10 (plus the Virgin Islands) have decriminalized it, and medical cannabis is now legal in 37 states.

Yes, cannabis made leaps and bounds in 2022. Even our Commander in Chief, President Joe Biden, made big promises to pardon all federal cannabis possession offenders, and demanded Attorney General Xavier
Becerra initiate the process of “reviewing” how cannabis was scheduled (Weed Between the Lines, “Tastes like crow,” Oct. 13, 2022).

While there have been no meaningful steps toward accomplishing either of those commitments, things are happening on Capitol Hill. And some of them could be a signal of more progress yet to come in 2023.

Sen. Chuck Schumer made a desperate last-minute attempt to get cannabis banking reform included in the Omnibus appropriations bill. He failed. But Schumer and Sen. Cory Booker’s Cannabis Administration and Opportunity Act (CAOA) is still on the floor of the House. Almost no one thinks it will pass, as it will need 60 votes. But still, its mere introduction could add momentum to other cannabis bills on Capitol Hill, according to Randal Meyer, the executive director of the Global Alliance for Cannabis Commerce (GACC). Meyer told MJ Biz Daily the CAOA could have an “uncorking effect” for marijuana legislation.

“It really does increase the chances of something happening,” Meyer said.

Hopefully that goes somewhere. According to the PEW Research Center’s latest polls, 88% of U.S. adults say marijuana should be either medically or recreationally legal. Only 10% of Americans remain strictly opposed to it in any form. That should speak to politicians about their constituents’ opinions on this. (If nothing else, it should tempt them with easily won votes, to take a pro-cannabis stance.)

Still, even with so many Americans in favor of it, education on cannabis as a drug, and as an industry, is going to be extremely important going into 2023, as evidenced by failed local recreational measures in both Colorado Springs and Jefferson County here in Colorado — both shot down by voters in November. And both of which were fought hard by anti-cannabis lobbying organizations (Weed Between the Lines, “Attack of the Lobbyists: SAM,” April 21, 2022).

“Colorado cannabis companies have become significant contributors to the community,” Liz Zukowski, policy and public affairs manager at Native Roots, said in a press release. “We need to better connect with our citizens, so they fully understand the benefits the sector provides to the entire state.”

While the future for cannabis looks good from a political perspective, there are also economic growing pains the industry is learning to cope with. In 2022, for the first time in Colorado’s cannabis industry history, there was a sustained downturn in sales. Back in June, sales were down 11.4% from the previous year, according to CNBC.

That’s no reason for cannabis entrepreneurs to panic. But it is proof that oversaturation and overextension are still possible, even in a booming new industry like cannabis.

2023 is not a midterm election year, which means there may not be as much progress over the next 12 months as there was in the last 12. But without question, we’re closer to an actual, federal end to prohibition than we’ve ever been before. Which is hopeful, no matter how you slice it.