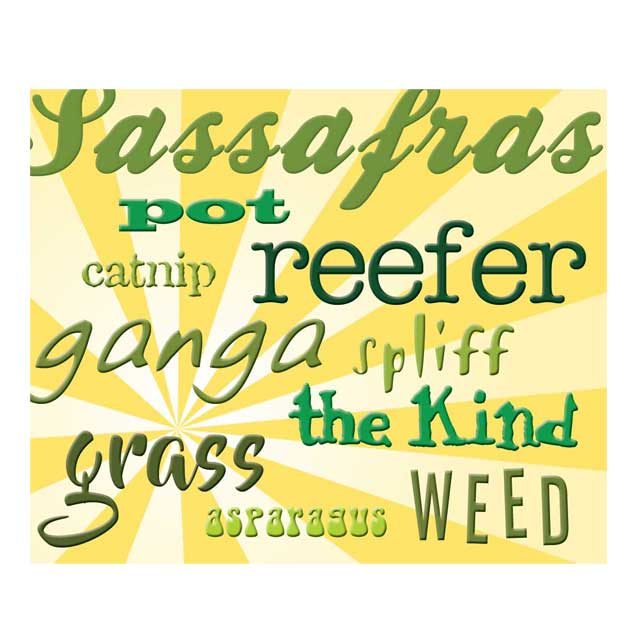 OK, time for a short quiz.

That’s how many British slang lexicographer (aka dictionary guy) Jonathon Green has collected so far.

In addition to being an authority on English language slang — he’s published a three-volume dictionary of it — Green is evidently something of a pot afficianado: He’s written three books on it.

He refers to drugs generally and marijuana in particular as one of slang’s “best sellers.”

Here are some of the common and not-so-common names for pot from his collection, along with their possible origins from Green and others.

Start with the most common of all: Marijuana

Marijuana is the Spanish name for the plant; that’s pretty well known. Less well-known is the origin of pot. According to Green, it comes from the Spanish word for marijuana leaves, potiguaya.

Ganja comes from the Hindi word for the hemp plant.

Grass and weed are pretty self-evident, although weed may have a back story. Prior to World War II, most of the U.S. hemp supply (used for rope) had been grown in the Philippines, which was over-run by the Japanese in the first few months of the war. So Uncle Sam encouraged mid-western farmers to plant “Hemp for Victory.” Seeds from the hemp crops spread into ditches and were still growing as weeds in the ’50s and ’60s.

Hippies would go out in the country and pounce on the “ditch weed,” which was more likely to give you a headache than a high, but the name stuck.

In some venues marijuana was referred to as asparagus, according to Green, as well as broccoli, parsley, sassafras and turnip greens. Who knew?

Green thinks reefer is derived from the Spanish word grifo, which is Mexican slang to describe someone under the influence of marijuana, because grifo can also refer to tangled, fuzzy hair and thus a similar mental state. Grifo became greefo and morphed into reefer, he says.

Then there’s “the kind,” which refers to primo weed, but is probably a mis-pronounciation of a Hawaiian pidgin English term da kine. (Sort of like duct tape became duck tape.) In Hawaiian pidgin, da kine can refer to anything for which a speaker forgets the precise name (sort of like thingamajig in English).

Spliff, according to Green, may come from the made up word splificate, which may be a combination of stifle and suffocate. He thinks spliff describes confusing or confounding someone. However, here Green would get an argument. According to the Urban Dictionary, spliff refers to a combination of marijuana and tobacco in the same cigarette (as in split the difference, maybe). A joint on the other hand, is an all marijuana cigarette.

However, according to website Leafy, in Europe the term spliff often refers to all-pot cigarettes, while the term joint is used for a joint tobacco-pot combo.

As for joint, one on-line source speculated that the term derived from the fact that marijuana cigarettes were generally shared jointly. It’s as good a guess as any.

If the kind refers to top-tier dope, there are other terms that refer to junk weed.

Catnip is slang for inferior or fake marijuana, for example. This should not be confused with dank, which started out describing nasty, swamp-like things, but came to describe good things, like marijuana of the highest quality. Just like bad morphed into a slang term for good.

And here’s a real blast from the past: Nixon. Nixon refers to poor quality pot sold as high quality pot. The term is clearly dated. An obvious update would be to rebrand such weed Sessions.

The emergent legal marijuana industry doesn’t like any of these terms, because they all evoke the illegal drug culture. It prefers to call its product cannabis, which has the virtue of being pot’s formal name in the taxonomy and of coming from the classical Greek word kannabis, the earliest name for it.

Personally, I prefer the slang names. Cannabis is all well and fine, but it’s like adopting a coat-and-tie name for a tie-dyed T-shirt.

Hey, during World War II the U.S. Army discovered it had a Sgt. Hitler in its ranks and asked him to change his name.

“Let the other guy change his,” he snorted.