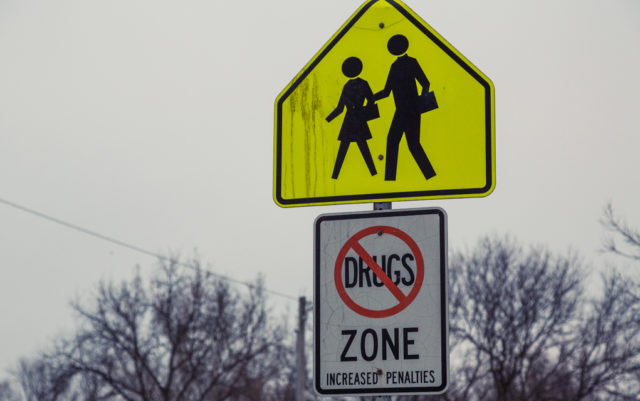 According to the Denver Post, the state of Colorado has given 42 school districts and charter schools a total of $9.2 million to hire people and create programs to keep marijuana out of the hands of students.

The dough comes from taxes on pot sales that were approved by the voters when they passed Amendment 64 in 2012 and 2013.

So what exactly are the school districts going to do with the money? Good question. The story isn’t very helpful in that regard.

We learn that the Jefferson County’s School District is getting $825,164, which it will use to hire three full-time school nurses and six “social emotional learning specialists,” the latter to work at elementary schools.

The Denver Public Schools are getting $871,636, which the District will use to pay “health care professionals to lead substance abuse, suicide prevention and other programs at 22 high schools and middle schools.”

(In case you’re wondering, the money is not misappropriated; Colorado’s voter-approved taxes on pot contain language allowing the revenues to be used for a slew of health-, wellness-, research-, and law-enforcement-related purposes, some of which are only tangentially related to marijuana if at all.)

Colorado schools can certainly use more school nurses. There are currently 630 of them in the state, according to the Post, with each responsible for as many as 6,000 students — eight times the federally recommended case load.

But just what school nurses can do to prevent underage pot use, and how they will fit doing it into their existing job descriptions, which the Post says includes dealing with “flu outbreaks, diabetes, severe allergies, body image issues and football-related concussions,” not to mention handing out Band-Aids and applying tourniquets — is left unsaid.

There are useful things that could be done in drug education programs — teaching harm reduction strategies for use in later life, for instance — but it’s hard to imagine that K-12 educators will have the courage to produce programs that make a difference.

For example, any program to discourage “substance abuse” has to start by making a bright line distinction between use and abuse. Otherwise it has no grounding in reality and no credibility.

But the knee-jerk reaction of high school principals and school board members will be to tell students that any amount of pot use at their age is risky, and there is no acceptable risk.

That obviously isn’t true, and the kids know it. Millions of Americans have smoked marijuana in high school and college without suffering long-term brain damage. They’re called parents and grandparents.

Past drug education programs flopped because they were built on a foundation of similar lies and deceits, which teenagers were remarkably adept at sniffing out. Today’s will also have to contend with students who can fact check everything they’re told on the internet in near-real time.

The Post’s story does say that in addition to being next to marijuana dispensaries, the schools receiving the grants are ones that have created “evidence-based plans to discourage underage marijuana use.”

It’s a pretty safe bet that the folks who are producing the “evidence-based plans” (and the evidence) come out of the fever swamp that gave us Reefer Madness, marijuana: destroyer of youth, Just Say No, Zero Tolerance, D.A.R.E. instruction, the fried egg metaphor for your brain on drugs, 70 years of junk science, urine testing, asset forfeiture, 25 million arrests in the name of protecting kids from pot, and a trillion dollars flushed down the drug war toilet.

In other words, keep expectations low.