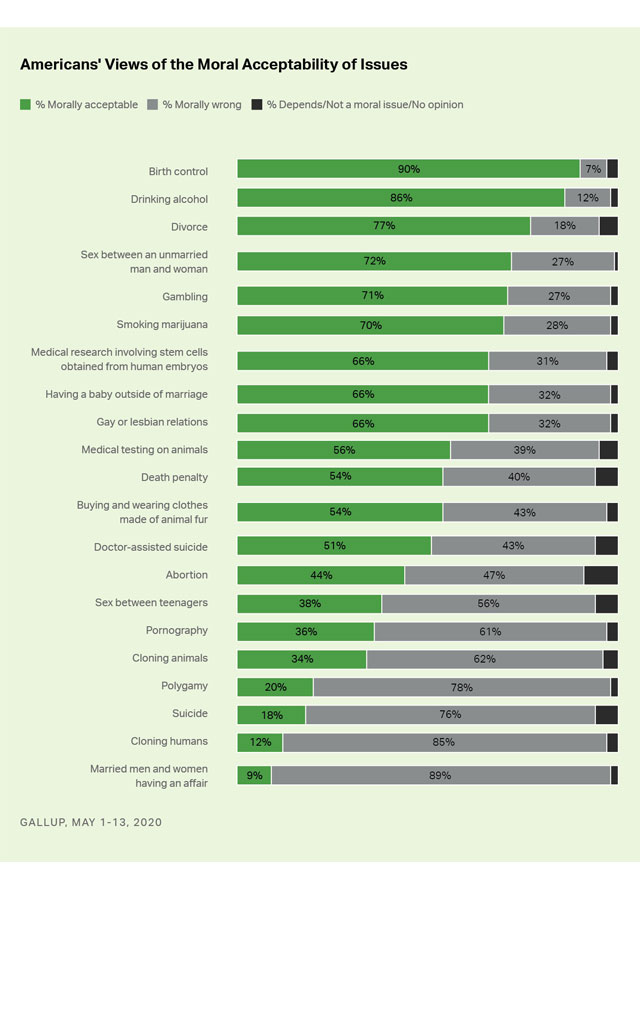 Seventy percent of Americans agree: Smoking marijuana does not make you an immoral person. Only 28% think smoking pot is morally unacceptable.

Alcohol finished in second place. First place went to “birth control,” which was found morally acceptable by 90% of those surveyed.

Gallup noted that marijuana’s moral acceptability has jumped 5 percentage points since 2018, when 65% of those surveyed were morally cool with smoking pot.

The police reform movement sparked by the death of George Floyd has given a new boost to marijuana legalization efforts in the Virginia and Georgia legislatures.

The caucus also plans to introduce bills calling for automatic expungement of past marijuana convictions, a ban on no-knock searches, and a requirement that the state’s courts publish racial data on people charged with low-level offenses.

The Virginia legislature passed a pot decriminalization bill during its regular session earlier this year. The decrim also authorized a study of full legalization.

The sponsor of the decriminalization bill, Democratic State Senator Adam Ebbin, who isn’t a member of the Black Caucus, has separately announced that he favors passing full legalization at the special session.

“It is time for action to reform Virginia’s policing practices and continue the crucial work of deconstructing systemic racism,” he tweeted a couple of weeks ago. “We can’t wait until January to pass meaningful reforms.”

Northam, who took the lead in passage of the decrim bill (he had made the issue part of his successful gubernatorial campaign in 2017), has not yet backed the Black Caucus’ proposal.

However, a spokesman for the governor gave a temporizing statement to the Richmond Times-Dispatch: “Governor Northam is proud to stand with the Virginia Legislative Black Caucus in their push for systemic criminal justice and police reform, and looks forward to reviewing specific legislation.”

In Georgia, Democratic lawmakers included a somewhat flaccid decriminalization provision in a broader police reform bill. The provision would make possession of up to a half-ounce of marijuana a misdemeanor punishable with a maximum fine of $300. Possession of half- to two-ounces of pot would carry a penalty of up to a year in jail and a maximum $1,000 fine, or up to a year of community service.

Still the proposal is progress of a sort. And the fact that marijuana legalization is getting rolled into broader law enforcement reform measures is a big deal by any measure.

The war on drugs generally and the war on marijuana in particular has done enormous violence to Black America for more than a century. Ending both probably would be the most immediate and significant step that could be taken toward ending systemic racism in the American criminal justice system.