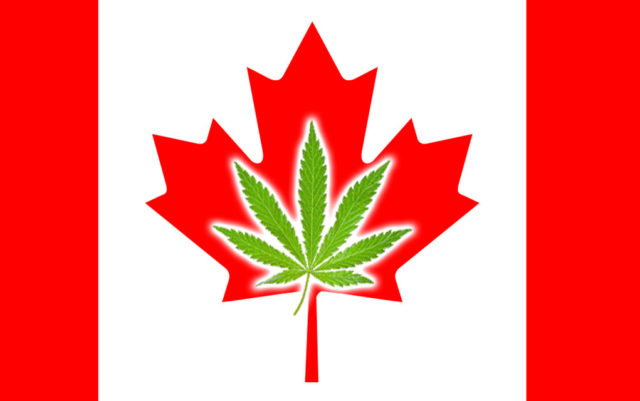 Geographically speaking, we’re now more than half way there.

On Oct. 17, recreational marijuana became legal throughout Canada. Throughout all 3,855,100 square miles of it.

And when that is combined with the 1,267,093 square miles of the nine states and the District of Columbia that have legalized recreational pot, more than half the map of North America, from the Arctic Ocean to the Panama-Colombia border, is now painted green.

The Canadian Parliament voted to legalize marijuana last summer and set Oct. 17 as the day the law would take effect. Oct. 17 was a lot like Jan. 1, 2014 in Colorado; only a handful of dispensaries were open across the country.

But the Canadian law contains a wrinkle that isn’t available in the U.S.: Every province is required to set up an online purchasing system.

Online purchasing and mail-order delivery isn’t new in Canada. The country’s medical marijuana industry has been using it since 2013.

According to the Associated Press, Canada Post, the country’s post office, won’t leave the package unless someone is home to receive it and requires proof of age upon delivery.

Speaking of age, Canada’s federal minimum age for marijuana consumption is 18. However the law allows the provinces to pick higher ages, and most are opting for 19, which is also the drinking age in most places.

All dispensaries in Canada will get their marijuana from growers licensed by the Canadian federal government. Since marijuana in the U.S. is still banned in federal law, the feds aren’t involved in licensing commercial grows. Given the feds’ 81-year history of pharmaceutical fascism, this may be a good thing.

Don’t expect the sort of price wars in Canada that recently broke out in Boulder. That’s because the provincial governments can set a base price. Most have set it at $10 a gram; the Yukon is considering an $8 a gram price.

Then there’s the matter of taxes. The federal government wants to tax legal pot at either $1 per gram or one-tenth of the product’s price, whichever is more. Consumers will also have to pay federal and provincial sales taxes. This still works out to less than the taxes in most U.S. states.

The Canadian law gave the country’s provinces considerable autonomy in terms of the details of how legalization would work, so the specifics vary from province to province.

In some provinces sales will take place at state-operated liquor stores, in others at privately operated dispensaries, in still others at both.

No dispensaries will be selling edibles, which are currently banned at the federal level in Canada. The government said it needs about another year to develop regulations for edibles.

Canadian pot will come in bags with huge warning labels. The health ministry has set restrictions on font sizes, styles and colors, supposedly to avoid appealing to minors.

“It looks like each bag is housing radioactive waste,” said Chris Clay, who owns a medical marijuana dispensary on Vancouver Island.

Home growing will also vary from province to province. Most will allow up to four plants. Quebec and Manitoba are banning it.

And, of course, there are limits on how much pot an individual can legally possess. The national standard is 30 grams for purchase and public possession of any kind of pot product. Most provinces have no set limits on how much can be kept in a private home.

Canada has clearly learned some things about legalization from the U.S. experience up to now, but in some areas is repeating U.S. over-regulatory measures that were necessary to get legalization measures passed by skittish voters and lawmakers.

Most of which will fade away as people see that the repeal of pot prohibition doesn’t lead to the collapse of civilization.