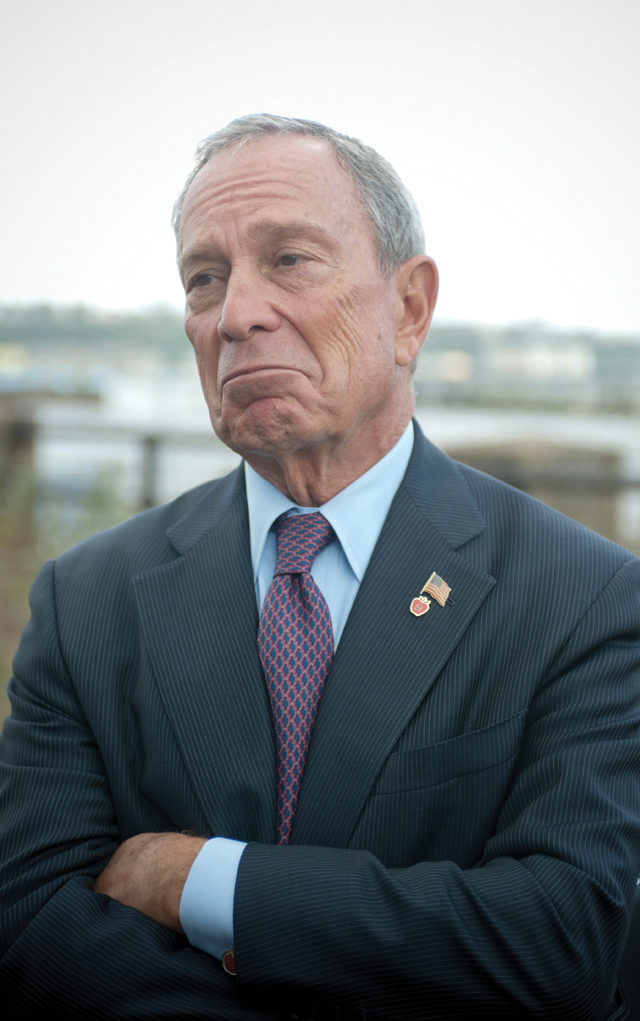 “He believes no one should have their life ruined by getting arrested for possession,” a spokesman for the former New York mayor (who racked up 440,000 pot arrests during his years in office) told the Wall Street Journal.

“And, as a part of his reform efforts that drove incarceration down by 40%, he worked to get New York State laws changed to end low-level possession arrests,” spokesman Marc LaVorgna brightly added.

“He believes in decriminalization and doesn’t believe the federal government should interfere with states that have already legalized,” LaVorgna continued.

The claim that Bloomberg worked to get state laws changed to end low-level possession arrests comes with a side of chutzpah. It is true that in 2012 Bloomberg came out for a bill that ended arrests of people who possessed pot in public view. But not before opposing a 2011 bill in the state legislature that would have made possession of 25 grams or less of pot punishable by a court summons and fine instead of jail time.

At the time, a Bloomberg aide told the New York Times the 2011 bill “would encourage smoking in the streets and in our parks, reversing successful efforts to clean up neighborhoods and eliminate open-air drug markets like we used to find in Washington Square Park…

“Marijuana arrests can be an effective tool for suppressing the expansion of street-level drug markets and the corresponding violence.”

During Bloomberg’s watch, New York City cops used to combine the “public view” ban with “stop-and-frisk” policing to bust people. First they would use stop-and-frisk to require suspects to empty their pockets and bags. If it turned out the suspects had marijuana in them, they were then arrested for possessing marijuana in public view.

Bloomberg saw the 2011 bill as a threat to these gotcha tactics. What prompted him to change his mind a year later may have had to do with the fact that the courts and the public were wondering out loud whether these sorts of stop-and-frisk arrests were constitutional.

Today Bloomberg is running for president and, correctly, sees his past anti-pot views as politically radioactive. So his stands on marijuana aren’t just evolving. They’re mutating.

So he’s apologizing for his past support of stop-and-frisk pot arrests, which disproportionately targeted black and Hispanic New Yorkers.

“I can’t change history,” he says. “However, today, I want you to know that I realize back then I was wrong.”

Chances are he also realizes that the voters in the Democratic primaries he will be running in next year will be disproportionately black and Hispanic.

About the only consistency in Bloomberg’s political career is that he is an over-controlling, petty tyrant who thinks he’s entitled to micro-manage people’s lives, including what they can eat, drink and smoke.

It’ll be interesting to see if his marijuana epiphany lasts past Election Day, supposing he gets that far. Especially his new-found support for federal non-interference with states like Colorado that have legalized recreational marijuana.

Quote of the week:

In an op-ed in Forbes, gritty freelance ganja journo Mike Adams offered this beautiful insight on the glacial pace of marijuana legalization at the federal level:

“It has been more than eight decades since the federal government outlawed the cannabis plant nationwide, and yet, here we are finally standing on its lawn with torches in hand waiting for a day of reckoning.

“Because no matter how much the suits on the Hill have schemed to enslave a population through backasswards drug laws, the nation has risen up in true knock-down-drag-out fashion and fought for its freedom back.

“Admittedly, this battle for legal bud took a lot longer than it should have, but considering that everyone in the trenches was stoned beyond belief, the marijuana movement seems to be arriving right on time.”

Eat your heart out, Kevin Sabet. No force on Earth is stronger than an idea whose time has come. Even if it arrives on Hippie Standard Time.