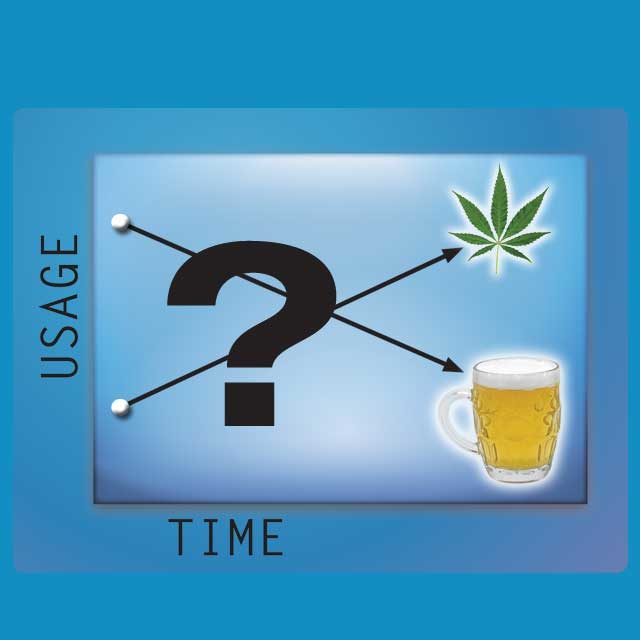 It’s a question people have been wondering about for years: Would marijuana be a competitor to alcohol if it were legal?

Now a new study is out suggesting it might.

The Marijuana Times recently reported that according to a study conducted by the research firm Cowen and Company, beer markets in Colorado, Oregon and Washington have “collectively underperformed” over the past three years.

All three states have both legal recreational marijuana and a popular craft beer culture.

“With all three of these states now having fully implemented a marijuana retail infrastructure, the underperformance of beer in these markets has worsened over the course of 2016,” according to the report.

Beer volumes sold in the three states are down more than 2 percent and trailing the overall U.S. beer market.

Craft beer sales in the three states have fared better, but also have taken a hit. Craft beer sales have continued to grow in Oregon and Washington but at a slower pace. In Colorado, they’ve dropped outright.

Denver beer sales have taken the biggest drop according to report; they’re down 6.4 percent. According to a recent story in The Denver Post, there are more than 150 recreational marijuana shops in the city of Denver — dozens more in the Denver metro area.

Nationally, there’s some evidence that legal pot may be impacting the alcohol industry as a whole. A survey conducted last July found that marijuana users spent about $640 a year on pot, while alcohol users spent about $645 a year on booze. It doesn’t automatically follow that pot users in Colorado, Oregon and Washington moved some of their booze spending over the marijuana when pot became legal — it could be they just started buying pot while not cutting back on booze — but it’s not unreasonable to assume that many did so.

On the other hand, the same study found that coffee users spent more on their substance — $1,000 annually — than either marijuana or alcohol buyers spent on theirs. Chances are legal pot isn’t cutting into coffee consumption.

Both studies focused on sales data and neither directly asked consumers if they were inhaling more and imbibing less — and if so why.

Just guessing, but chances are people who smoke pot do drink less booze, if for no other reason than unless you are a serious substance abuser there are only so many hours a month you can devote to being buzzed, and there isn’t much mental synergy to be had in consuming booze and pot together.

Then there are a substantial number of people who will choose pot over booze for reasons like it doesn’t beat them up as much physically, doesn’t leave them as hung over and reduces the chances of them getting in a fight. It really is the safer drug, and most people who use it don’t need a peer-reviewed study to tell them.

So is there any truth to the belief that big alcohol was behind marijuana prohibition and the war on drugs? It’s true that some booze interests have contributed to anti-legalization efforts, most notably in Arizona, but if marijuana prohibition was an alcohol industry plot, it was one of the most spectacularly bad decisions in business history.

When the feds outlawed marijuana in 1937, there were about 100,000 pot users in the county. Today, after 70 years of war on pot, there are about 25 million. And the great surge in marijuana occurred in the ’60s, when marijuana became an iconic part of rebellion and the counter-culture. If it hadn’t been forbidden, that wouldn’t have happened.