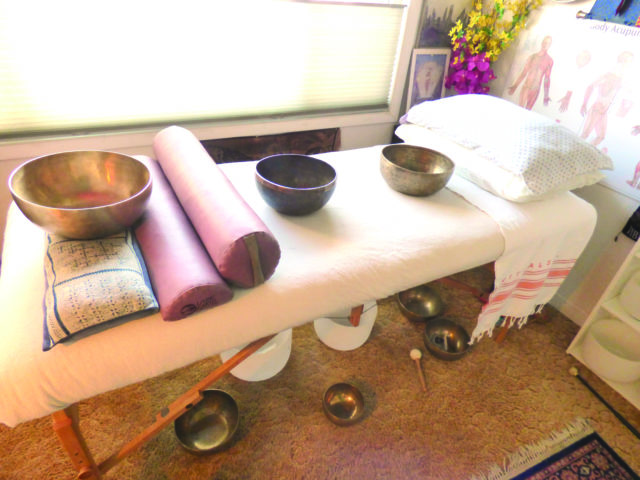 “I want you to give yourself permission to acquiesce,” Ray Stewart of Boulder Sound Therapy tells me before I hop on the massage table for my first sound therapy session.

We’ve just spent the last hour talking about why I’m in Stewart’s home office, his bookshelves lined with works about everything from psychology to psychedelics to mysticism. An over-the-door organizer holds some two dozen tuning forks of various sizes and frequencies. Frosted white crystal singing bowls sit among one another like clusters of abstract fungi on the floor near the massage table.

Clarity is really what I’ve come for; I’m interested in a different approach to the personal and professional exhaustion I’ve felt—we’ve all felt—over the last two years. Stewart listens attentively, inquiring gently now and then in his baritone to draw out more nuanced answers.

I dig a little deeper and admit that I’d like to tap into some latent—I hesitate over the word— spirituality? I’d like to be a little less cynical, a little more grateful. I want to connect with something greater than myself.

“That’s why I ask that you give yourself permission to acquiesce,” he says, “to let go and see what happens.”

Since sound moves faster through water than it does through air, our mostly-water bodies are a great medium. Acutonics practitioners, like Stewart, use tuning forks to move vibrations through the body at different points, like acupuncture with sound instead of needles.

Sound therapy is likely as old as humanity, with indigenous populations across the globe using drumming, hand-clapping, singing, stomping, and chanting in ceremonies. We’re all familiar with the visceral sensation of low frequencies at a concert—it sticks to you for hours afterwards.

In the mid-20th century, contemporary research on sound wave therapy started with British osteopath Peter Guy Manners, who studied the healing effects of certain sound vibrations and harmonics on the structure and chemistry of the human body.

Mandara Cromwell, a mentee of Manners, wrote an article in 2015 summing up why she and Manners had devoted their lives to what they believed to be the healing power of sound:

“At the first vibratory universal note a system of mathematics and harmonic ratios is revealed. From macrocosm to microcosm, we exist and live in a sea of sound. Geneticists have decoded the musical expression of our DNA; NASA has captured the sounds of all the planets, even the sound of black holes; and in November of 2014, the European Space Agency’s Rosetta probe recorded the sound of a comet. It’s no wonder our bodies respond to therapeutic sound.”

Cromwell points toward recent science on sound, from professors at Missouri University creating a photo-acoustic device that can detect as few as 10 melanoma cells in a blood sample to biological engineers at Duke University detecting disease with sound.

“Throughout our written history we find references to healing temples built with the intention to harness the three most powerful universal forces: sound, light and magnetics,” Cromwell writes. “These temples were constructed on magnetic vortices with architecture designed to capture the power of sound and light waves.

“Today, each therapist creates her own version of a healing temple.”

“Some people get embarrassed because they fall asleep, but you won’t exactly be asleep, just in theta state,” Stewart tells me as I climb up on the table.

Theta waves occur during the second stage of sleep, the “light” phase when the body is preparing to enter deep sleep. With slow activity between 4 and 8 Hz, theta waves are associated with memory, emotions, creativity, daydreaming, and activity in the limbic system. They often occur in times of deep relaxation or meditation and can perhaps be seen as a channel to the subconscious mind.

On the table I relax with my head propped on a couple of pillows, eyes closed. Stewart begins by activating tuning forks against hard pads strapped to his knees, then placing them on corresponding sides of my body, starting with my feet. The vibrations are minimal at first, but noticeable. The sensation is gentle.

Stewart focuses on my head for a bit with the forks, since I’ve mentioned a recent surge of migraines in the past year. The sensation is more pronounced around the skull, obviously, and the sound takes on a more resonant quality. I’m relaxed, but certainly still awake. I find myself slipping between meditative and analytical states.

As he would later tell me, Stewart decided to “break out the big guns.” He placed a blanket on my solar plexus—the Manipura in Sanskrit—then a crystal singing bowl on top of that. The solar plexus is the third chakra in Hindu and Buddhist traditions. This collection of energy in the upper belly is thought to govern ego and identity, personal freedom, and authenticity.

The bowl is likely an E note, which is associated with the Manipura chakra. The frequencies are low, the waves slow and palpable in my body. There’s nothing but me and the sound of this bowl for minutes, surely, but time has started to warp a bit and I’m spending more time in the meditative state, fully present in the liminal space between sleep and awake.

I’m aware as the tuning forks return, this time in several new frequencies, and again as a new bowl is placed in the center of my chest, my heart chakra.

And from here on, I have no memories until the smell of lavender breaks the spell. I’m not sure how much time has passed, but I feel refreshed. Stewart closes out the session with a gentle song on a steel tongue handpan, the notes washing over the room like low-tide waves.

I’ve only had one acutonics session, so who knows if I’ll have less migraines this year, but I can say that I felt better that day, all day. I plan to go back. Maybe that’s because I sat and connected with another human being. Maybe it’s because I took some time out of life and had a cool experience. Maybe it’s the power of sound.

Probably it’s all of it.