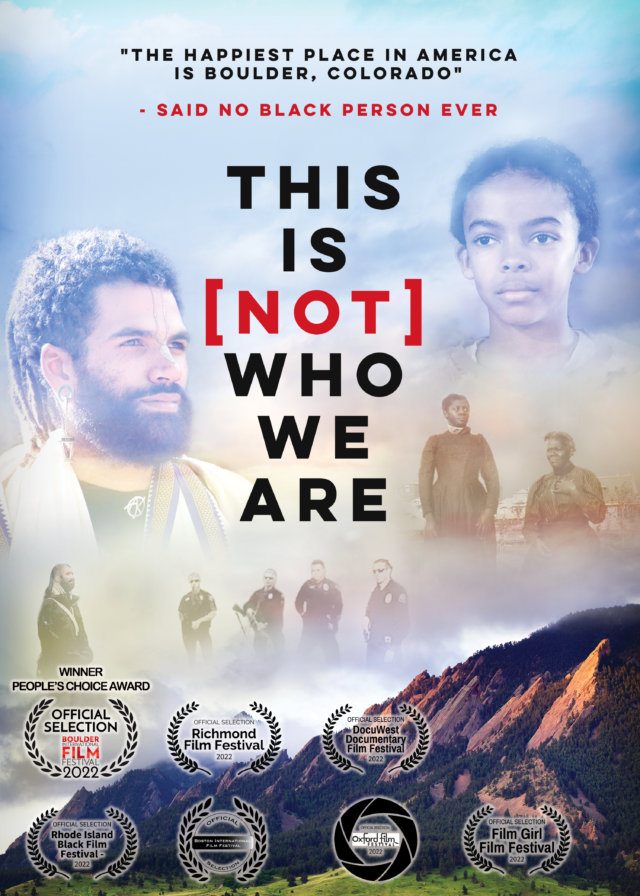 When Katrina Miller was a journalism student at CU Boulder some 20 years ago, the student body president—Mebraht Gebre-Michael, also a Black woman—received an email that, in a way, sent Miller down the path to creating her most recent award-winning documentary, This Is [Not] Who We Are.

“The email said she better step down [as student body president], with her ugly monkey skin, her ugly hair…. The n-word was used,” Miller recalls. “I was just appalled that campus wasn’t more in an uproar.”

At the time, Miller created a documentary called Blacklash, interviewing professors and students, including Gebre-Michaell, about why there weren’t more Black students at CU.

“I got an A on it,” Miller says, “but it didn’t really reach beyond [the classroom] as a student project.”

Over the last two decades, Miller stayed in Boulder—founding Blackat Video Productions and raising two children with her husband—and continued to examine the gap between Boulder’s progressive self-image and the lived experience of its Black citizens. When she was introduced to Beret Strong and John Tweedy, the team behind Landlocked Films, Miller finally got the chance to make a wider-reaching film about the racial climate in Boulder.

This Is [Not] Who We Are won this year’s Boulder International Film Festival People’s Choice Award, racking up the most votes of any film in the festival in any category. Its story is centered on Zayd Atkinson, the Naropa University student who found himself in an escalating confrontation with a Boulder police officer while picking up trash in front of his apartment in March 2019. Atkinson’s story creates a jumping point for the filmmakers to dissect Boulder’s history of racial profiling—from its segregated neighborhoods off Goss Street and near the current main library branch, to replacing the Black staff at Chautauqua with white employees, to the decades-long battle to bring Black students on the campus of CU Boulder, to students in Boulder’s school system today who are often punished for their white classmate’s racist harassment.

There is no hiding from reality when 12-year-old Celine Mariam Samuel shares audio from a video a classmate shared to social media calling Samuel “Satan’s daughter,” laughing callously while crunching on a potato chip. “I’m not going to get in trouble with the police or anything,” the white student says.

“Parents have reached out, students have reached out,” Miller says. “The experiences they are having are atrocious. They have not been supported in school. From Fairview to Boulder High to Centaurus, there are students who are being followed around in the hallways being called the n-word, and nobody is doing anything about it. The African American student gets in trouble. What do you think is going to happen? Are they going to stick around? Hell no. They are going to go somewhere else where they feel like they belong. … This is why parents leave: They can’t raise their children in that environment. Sometimes I wonder if that’s going to be my fate with my kids, because they are the only Black kids at their school.”

The film looks at what the city of Boulder has done to address racial profiling—like creating the Police Oversight Panel in 2020—but it makes clear that real change depends on individual responsibility.

“I think this is because I’m a middle-aged white person, but I want viewers to take this personally,” Beret Strong says. “It’s not the government that’s gonna fix it, it’s each one of us: We have to ask, ‘Where is my complacency?’ … It’s so easy to watch a great social activism film and walk out and say, ‘That’s so awful,’ and then do nothing. We lapse back into our habitual unconsciousness. We have to be active in taking responsibility for ourselves, learning what allyship really looks like.”

Miller and Beret are now taking the film to festivals and community screenings across the country, “because this isn’t unique to Boulder,” Miller says.

ON THE BILL: ‘This Is [Not] Who We Are.’ 2:30 p.m. Saturday, March 26, DocuWest Film Festival, McNichols Building, 144 W. Colfax Ave., Denver. Screening will be followed by a panel featuring Zayd Atkinson, Celine Samuel, Katrina Miller, Beret Strong, and local activists. Tickets: bit.ly/3q8iVf6