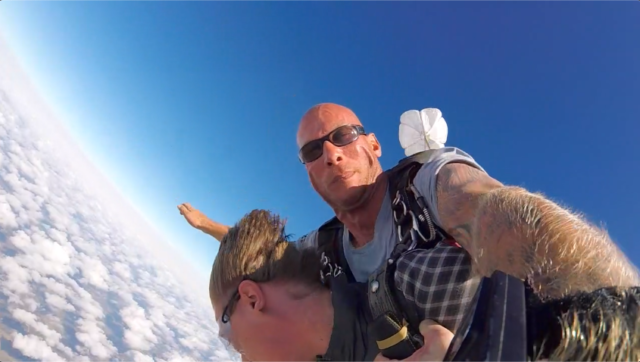 As a journalist — a good one, anyway — when the main source in your story is a professional skydiver who used his plane in one of the longest running, most lucrative marijuana trafficking operations in Colorado history, you know what you’ve got to do to tell this story.

So Chris Walker suited up and jumped. The former reporter for Denver’s alt-weekly Westword did a tandem skydive with “Jumpin’” Joe Johnson, the head of a Denver-based marijuana trafficking organization that duped Colorado cannabis regulators for nearly five years by operating seemingly legitimate growhouses while trafficking harvests out of state using cars and skydiving planes. Johnson’s very first run was out of Boulder’s municipal airfield.

Walker dubbed them The Syndicate.

“It was a little nerve-wracking,” Walker says of his 14,000-foot plummet with Johnson. “It was my first time skydiving, but also I just didn’t really know [Johnson] as a person very well, but it seemed like an opportunity to get into his mindset because skydiving is his first love. He had jumped more than 15,000 times [by the time I jumped with him]. A key part of understanding him is just getting into this adrenaline rush that he constantly puts himself through.”

After years of reporting — including interviews with around 10 of the nearly 40 members of The Syndicate, and scads more with law enforcement and marijuana industry experts, plus more than 100 hours of state evidentiary interviews — Walker recounts this incredible story over eight episodes in his first-ever podcast, The Syndicate.

When the story first broke in 2014 that the Drug Enforcement Agency had kicked down the doors of 32 people around Denver for participation in a marijuana smuggling operation, there were flashy press conferences and 30,000-foot-view stories in papers across the country. But Walker knew there was a more nuanced and compelling story to be told. In fact, he knew there were 32 nuanced and compelling stories to be told.

“When the group was busted, everyone’s names were plastered in different articles online, and what was missing was any sort of nuance or context about why each and every person got sucked into this crazy situation,” Walker says.

“The big question that I had is: Why would you deliberately take on so much risk starting a black market trafficking group when the cannabis industry in Colorado seemed to be thriving?”

Because the industry’s not actually so easy to break into. And Colorado, for all of its success with legalizing and regulating marijuana, has some policies in place that set the stage for black market distribution.

It would be years before Walker had the material he needed to create a podcast: The state of Colorado remained tight-lipped with information as the nearly three-dozen trials took place, a process that was drawn out as federal agents searched for a member of The Syndicate who set out on the lamb.

“Finally, in 2019, the individual who was missing was located in North Carolina and extradited back to Colorado, where he was quickly convicted,” Walker says. “And once that happened, the Attorney General’s office was good on its word and the Pandora’s box of state investigative and evidentiary files opened up. And it was a treasure trove about what had happened in the rise and fall of this group.”

In more than 100 hours of taped interrogation recordings, Walker listened as members of The Syndicate told stories about bags of buried cash, armed robberies, run-ins with federal agents, hard drugs, partying, and a hash extraction that almost blew up a residential home.

But “The Syndicate” is more than adrenaline-pumping tales of danger and debauchery.

“It’s, first and foremost, an argument for federal legalization,” Walker says. “If you remove the state-by-state patchwork of laws, then you eliminate this discrepancy between having legal markets in some states and black markets in other states. Beyond that, it highlights what needs to be done on a state-by-state level. States [with legal markets] need to get on board with how they regulate the industry and how available licenses are for cannabis cultivation and for dispensaries.”

ON THE BILL: “The Syndicate.” Available on all major platforms, including the front page of iTunes, Spotify and Stitcher, foxtopus.ink/the-syndicate.