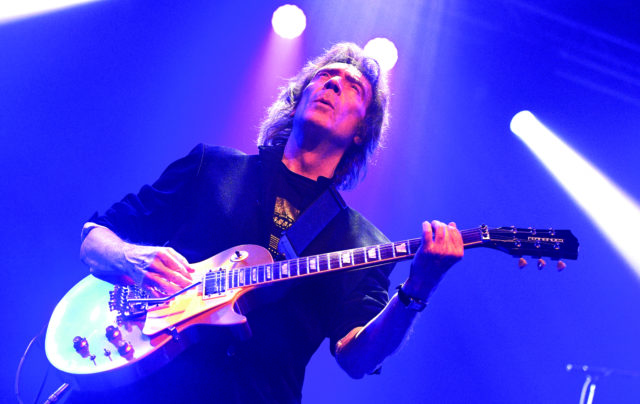 They say that a band can best secure its legacy by knowing when it’s time to go out, even if most of the people saying that aren’t actually in a band and have day jobs and have something worthwhile to do the next day, while their freshly retired musician idols may not.

The final curtain call for Genesis came a few weeks ago in London before a packed O2 Arena consisting of aged first-gen prog fans and their younger, pop-era counterparts. Whether or not the last tour, which actually got decent reviews, came one tour too late, a speculation inspired by the sight of a wizened Phil Collins singing from a stool, was a subject of plenty of debate among the faithful, even if the band’s chops were still largely intact and much of their music retained the same punch and crafted arch that had served them well, in different contexts, since the late 1960s.

Steve Hackett, who joined the band in 1971 after founding guitarist Anthony Phillips surrendered to unrelenting stage fright, was a central figure in the band’s rise as one of progressive rock’s most successful acts, recording six studio albums and a handful of live albums with them before embarking on a fulltime solo career in 1977. For the pre-mega-hit Genesis crowd, for whom the prog years were often a dimly recognized footnote, the music the band produced during the Hackett years represents the true canon.

We asked Hackett in a brief interview a couple of weeks ago whether he’d had the chance to catch his old band’s swan song tour at all.

“I didn’t, I was doing so many shows myself, there never really was a moment when that was possible. One of our [band members] caught COVID at the beginning of our tour, so we had to put the Canadian shows on hold, so we’re doing that at the end of the year now.

“I had one night off when I could go and see them in London if I wanted, and I thought, I cannot risk catching COVID myself when we have this American tour coming up. If one of our number would have gone down… to sit in a crowd, even with a mask and even though I’m triple-vaxxed, I didn’t want anyone else to get electrocuted.”

But you would have seen them otherwise?

“I would have gone, absolutely, yeah.”

If his original band has finally taken their last bow, Hackett surely has not. He has been re-recording and touring much of the Genesis catalog from the early- and mid-’70s off and on, since first revisiting it in 1996, all the while maintaining a steady output of solo material.  There’s a little irony involved here, of course—Hackett left the band in some frustration that he couldn’t get more of his own contributions on the records, and much of the music that keyboardist Tony Banks delivered was so heavily keys-based, Hackett was finding it increasingly difficult to find his role. Yet, more than 40 years later, Hackett is re-delivering many of those songs live with his own band, in combination with his own material, which more than one observer has noted sounds a lot like what Genesis may have evolved into had they not found and embraced the four-minute, MTV-friendly single.

“Well, I think that became an abandoned place for Genesis,” he noted of the prog years. “There was a Genesis audience who liked the classic early stuff, the stuff with Peter Gabriel and the things we did with Phil when we were a four piece. The direction the band took, and it was hugely successful, didn’t serve what had spawned it in the first place. There was a certain reliance on programming and drum machines and all that, and yes, we knew they still had the fire when they wanted to pull it out of the bag.

“The difference, I think, is that what you get with the guys I work with, is a band on fire.”

Setting aside any old-schooler skepticism about guitarists playing their old band’s material—we’re kind of past that now—Hackett’s band moves aggressively through much of the old material with startling kinetic confidence. Vocalist Nad Sylvan and keyboardist/music director Roger King both nail and expand upon Banks’ and Gabriel/Collins’ presence, and Hackett’s solo material, typically elaborately arranged and forcefully rendered, makes a strong case that, in some ways, Hackett’s band is a more confident and stylistically ambitious live unit than Genesis circa 1973.

“Yep. I think there’s confidence, I think there’s virtuosity at work. I don’t think any of it has been diminished with time. I think it’s much more intense, in a good way. Craig Blundell (drums) is on TV in the UK, he’s extraordinary, he’s working with everybody.

“[Roger] was originally an organist, then got into film music, and yeah, he gets better all the time. But he’s extraordinary. He’s the only guy I’ve ever met who can transcribe Bach by ear. Very deadpan, very dry humor, very British.”

“I’m very, very lucky to have these guys. It’s fortuitus for everyone in the band. Some of it is very demanding music, but it’s also music that has surprises, and I think we’re re-invigorating it, not just revisiting it.”

When Hackett last came through several years ago to play the Boulder Theater, we were quite surprised to hear some of the more obscure, and fiendishly difficult Genesis material, poised alongside Hackett’s solo album at the time, the spooky and transcendent Wolflight.

“Can-Utility and the Coastliners”? That maddeningly arranged and oddly titled (slyly referencing King Canute, the Dane royal who governed Britain in the early 11th century) nugget from 1972s Foxtrot?

“With ‘Can-Utility,’ I ended up writing the song part and doing the lyrics to that. There’s a writer, a lady by the name of Joanne Harris, who wrote the novel Chocolat, and she’s a fan of that track, which I just read recently. That was very nice to hear. But I think we played it two or three times with Genesis and we just gave up, I think it was just too complex. We threw in the towel, but not with these guys. They do a wonderful job with it.”

And thankfully, the technology has caught up with some of that early band’s ambitions. The lengthy and decidedly weird narrative tune “Battle of Epping Forest,” from 1973s Selling England By The Pound, was legendarily dropped from the band’s live setlist, forever exiled as a deep cut. Another piece that they just couldn’t get right onstage.

“We started playing that one live in the States, and we gave it up. I was using an Echoplex in those days, and I just couldn’t get it to work properly. That was 1973, a long time ago. But we do it now because I know it comes across with some power. But you have to have a band that’s very, very precise to do it properly. There’s a lot of contrapuntal stuff on that one. In those days, the rhythm section, Phil [Collins] and [bassist Mike Rutherford] were doing anything but playing it straight. It was a sort of a 5-to-1 situation. ‘What time signature are these guys playing in?’”

But if the delight for Genesis old schoolers is in the old stuff, Hackett’s solo material, especially his last few, are a revelation in and of itself. His latest (which, to be fair, Hackett may not have even mentioned himself had we not brought it up in our 20 minute chat, in an oddly non-self promoting turn) is called Surrender of Silence, and for anyone who may regard the Genesis covers as performative nostalgia, Hackett reveals himself on this record with no restraint as a big statement, big arrangement, big instrument prog soldier of massive ambition. From the ominous “The Devil’s Cathedral” with King’s furious organ vamp opening and Sylvan’s menacingly vocals, to the grand strings-and-choir piece “Natalia,” the world-music shaded “Shanghai to Samarkand” and the touching closer “Esperanza,” featuring Hackett’s deft and under-appreciated nylon string playing, this is progressive rock at its most mature, most gloriously indulgent and meticulous crafted. Hackett is a believer. He never stopped being a believer.

“It’s a very intense album. There are some albums I can listen to from beginning to end, but that one, the energy just keeps coming at you. It’s very much a rock record, but with some world music. Tracks like ‘Natalia’ or ‘The Obliterati’, you get that sort of..is it rock? Is it classical? Is it a heavy metal orchestra? But yeah, I’m very proud of the arrangements.”

The Financial Times, which recently ran a sympathetic piece on Genesis’ last show, also featured a piece about how prog rock was having something of a moment with a resurgence of the genre (especially in Europe), and in some ways coinciding with the recently released Toby Amies documentary about King Crimson. It reminded us that we read an odd tidbit about Crimson’s history not long ago that Robert Fripp, pressed by a few musical colleagues to resurrect the band during one of its hiatuses, suggested to someone or other that Steve Hackett should take over as guitarist for the mighty Crim. We asked Hackett if he had ever heard this himself.

“Well,” he laughed, “he never actually phoned me up and asked me if I’d replace him in King Crimson. I think at the end of the day, any version of King Crimson without Robert would be, ‘The King is Missing.’

“Unfortunately, my great pal from King Crimson, the brilliantly talented Ian McDonald, just passed away. For me, Ian seemed to embody, if not be the one who invented what we think of as ‘progressive rock.’ I used to see them live, before they made In The Court of the Crimson King; his work was stunning. He could play incredible sax, incredible flute, devastating mellotron. Just to die for.”

The heart to Robert’s brain?

“Yeah, in some ways I think so. They were a brilliant band when they burst onto the scene, and I think paved the way for Genesis to a large degree. I think we were all fans of that band, who seemed to arrive fully formed. Whereas other bands took longer to really establish themselves. Genesis took its time to evolve, but suddenly there was this big bang called King Crimson.”