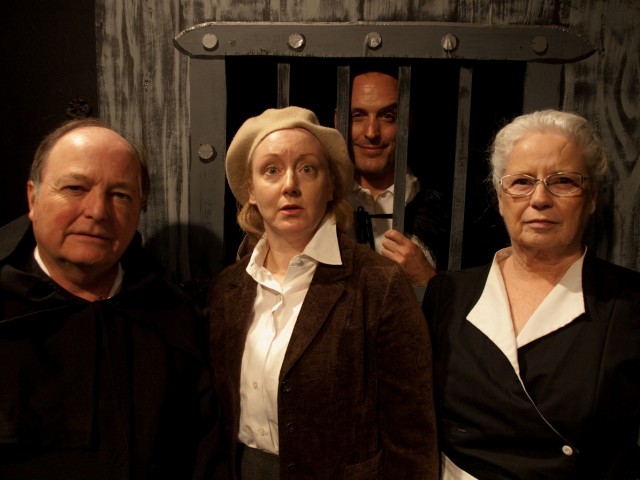 Judging from the Theater Company of Lafayette’s latest Halloween homage to all things Twilight Zone, the cast and crew must have some serious trust issues. Because if it’s not a sort of group sublimation, then it would have to be some incredible concatenation of coincidences that results in each of the three Twilight Zone parodies in this year’s show revolving around the need for and pitfalls of trust and belief.

Return to the Twilight Zone (Volume 7) is, perhaps unsurprisingly, the Theater Company of Lafayette’s seventh foray into the often ironic, sometimes sardonic world created by Rod Serling back in the 1950s. While each of the TCL’s Twilight Zone productions has paid loving respect to the original television series, this year’s show celebrates the 50th anniversary of The Twilight Zone’s first televised episode.

For any younger — or older but oblivious — readers whose only exposure to The Twilight Zone may be the short-lived 2002- 2003 remake with Forest Whitaker standing in for the iconic Rod Serling, allow me to present to you a brief history of a most compelling show. The original Twilight Zone ran for five seasons from 1959 to 1964. It broke new television ground by telling creepily entertaining tales, usually about average people who found themselves in unusual, sometimes unbelievable, situations. By adding just one supernatural element or removing one presumed constant of “normal” life, The Twilight Zone challenged and rewarded its viewers.

The original series eventually found its way into syndication, where it gained a wider fan base from another generation of TV viewers. In 1983, Hollywood brought forth Twilight Zone: The Movie, which featured remakes of four classic episodes, one of which was directed by Steven Spielberg. The television version of The Twilight Zone was resurrected in 1985 and again in 2002, but it’s not the show’s tenacious refusal to die that is its most interesting aspect.

That honor would go to the influence The Twilight Zone has had on television, movies and theater for the past 50 years. There would be no The Outer Limits, X-Files or any others of that ilk without the spiritual parentage of the original Twilight Zone.

The Theater Company of Lafayette adores The Twilight Zone.

If seven years worth of productions isn’t enough proof, the TCL will actually be donating a portion of the proceeds from Return to the Twilight Zone (Volume 7) to the Rod Serling Memorial Foundation. Thankfully the

TCL knows that scene-for-scene, word-forword reenactments of the original episodes would be difficult, if not impossible, and would lose something in translation to their humble stage. Instead, the TCL adapts the episodes, keeping the general plot and feel intact, while adding some knowing humor. Their adaptations are reverent yet fresh, and they are usually quite successful.

Return to the Twilight Zone (Volume 7) opens with “Nothing in the Dark.” (Well, technically it opens with one of three reenactments of classic commercials, but I won’t spoil the fun of those.) “Nothing in the Dark” gives us an old woman living as a shutin for fear the Grim Reaper will find her. Of course this being The Twilight Zone, the woman is quickly forced to face her deepest fear. Next up is “The Howling Man,” which makes a young woman choose between the seemingly insane logic of a monk and the earnest pleas of a prisoner potentially unjustly accused. Finally, “A Piano in the House” illustrates what could happen if some external force could compel us to show our real face and feelings to the rest of the world.

As he does every time he dons the suit and takes up the smoke, Ian Gerber plays an excellent Rod Serling. His introductions and occasional commentaries are the highest points of the show. In a role that could easily have become shrilly and one-note, Ellen Ranson convinces as the frightened but cagey old woman in “Nothing in the Dark.” Douglas Brent Smith is equally successful as the haughty theater critic in “A Piano in the House.”

While its stage may be small and its production budget meager, the Theater Company of Lafayette scores once again with Return to the Twilight Zone (Volume 7), proving that passion is much more important than resources when it comes to making good theater.