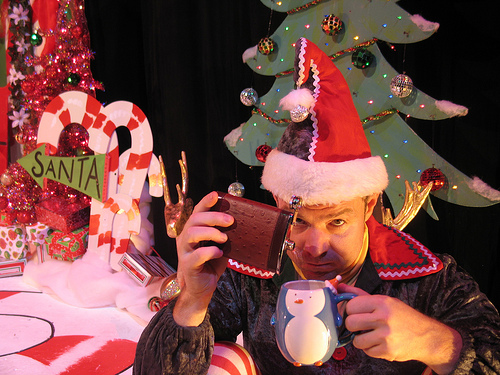 Christmas time is again upon us.

Depending on your orientation, it is a time for celebrating the birth of Jesus Christ, a time for jubilant gift-giving in the name of secular bonhomie or a time to get all Grinch green in the gills and decry every thought and action of anyone subscribing to either of the first two groups.

During this most wonderful time of the year, the theatrical circuit caters to well-wishers and humbuggers alike. Countless churches, schools and even private groups display living nativities or perform some version of the whole “away in a manger” story. The Denver Center for the Performing Arts can be counted on to offer up either Dickens’ immortal A Christmas Carol or Irving Berlin’s classic White Christmas. Meanwhile, many smaller theatre companies go for Christmas counter-programming and present cheeky, irreverent holiday fare ranging from PG-13 to hard R.

While there are many entertaining plays that revel in poking fun at Frosty, Rudolph, Santa, Jesus, Mary (and Joseph), avaricious children, henpecked parents and our out-of-control consumer culture, for me the star on top of the nontraditional Christmas show tree is The SantaLand Diaries, David Sedaris’ wickedly subversive, semi-autobiographical account of his time spent as an elf in SantaLand at Macy’s in New York City.

Few plays of any sort, let alone Christmas plays, could not only get away with a line like, “Santa, why are you spitting on me?” but use it to coax a rolling wave of laughter from the audience. From its opening moments, when David (played by Geoffrey Kent) explains to the audience that he applied for the elf position mostly as a joke and that at least an elf belongs somewhere (i.e. SantaLand) as opposed to the hapless bastards dressed as tacos and cell phones handing out flyers on street corners, The SantaLand Diaries is replete with dry wit and wry observations.

For the second show of its fourth season, the Boulder Ensemble Theatre Company (BETC — pronounced “Betsy,” according to the company) couldn’t have chosen better than The SantaLand Diaries. Sedaris has already done much of the heavy lifting with his near genius take on the absurdities of the season. All that remains for any theatre company mounting this production is to cast the appropriate actor to perform this one-man, one-act wonder and then provide him with a suitable stage on which to work.

BETC went to Jared, so to speak, when it picked Geoffrey Kent to star in SantaLand. A seasoned actor well known to Anglophiles for his work with the Colorado Shakespeare Festival and to Boulder theatre lovers in general for his many successful performances around the region, Kent gives us a measured but vibrant David. His timing is impeccable, and his delivery and characterization never falter. He wonderfully balances the more arch moments of SantaLand with the occasionally sincere ones, which is no easy task. His approach to David feels very naturalistic and is a boon to the production.

The vast majority of The SantaLand Diaries takes place in SantaLand, so it is important that the SantaLand set recreates, as far as imagination and budget allow, the overblown memories most of us share of the artificial winter wonderland we visited at our local mall when we, as wide-eyed children, went to sit on Santa’s lap. While BETC’s SantaLand set is serviceable, it is the one area in which I wished for more. It is at least disappointing and at most distracting to hear about an enormous Magic Tree children must pass through to see Santa — a tree likened by David to a huge model of the human intestinal tract — only to find that the version on stage is actually two dimensional and no bigger than, well, an elf.

Thanks to Sedaris’ writing and Kent’s interpretation, The SantaLand Diaries decks the halls with peals of laughter. It pokes fun at the frivolities of the holidays, yet honors their true meaning, and it is quite possibly the best Christmas-themed show playing this month.