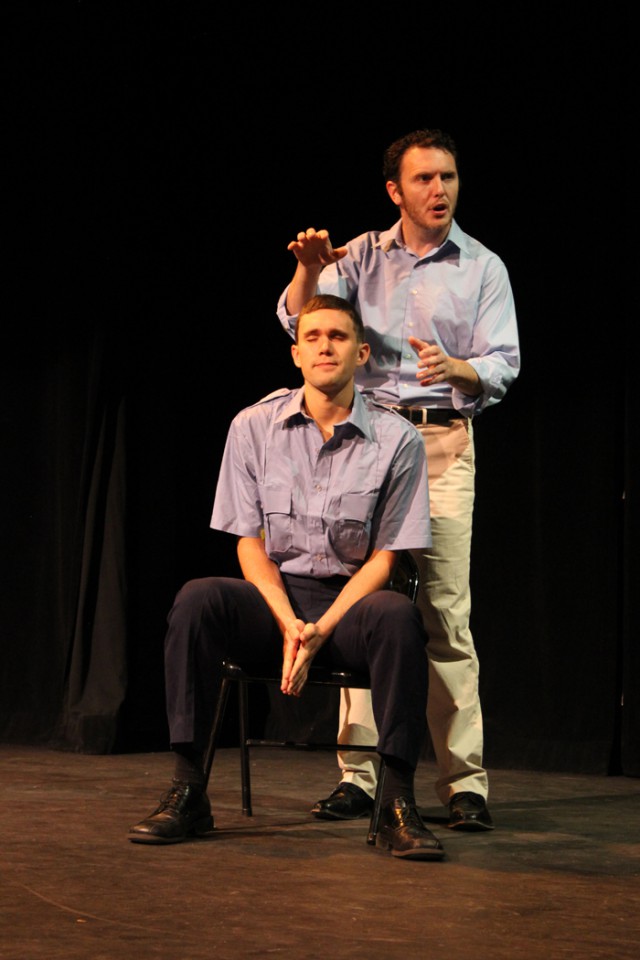 A February 2013 report from the Department of Veteran’s Affairs found that at least 22 veterans commit suicide daily. Most are older, further removed from service, but the number is still shockingly high, and climbing. Rates increased 44 percent just since 2009.

According to playwright Ami Dayan a lot of that may have to do with the shrinking percentage of Americans who serve.

“The military is 1 percent of the [American] population,” says Dayan. “I come from Israel, but one thing that is very fundamentally different in Israel is that everyone goes into the military, so it’s one nation, one military. So if there’s an attack on the street, everyone is connected. But here, you’re in Boulder, and the likelihood that you’re impacted is pretty low. Soldiers come back and they have all these traumas, and all these experiences, and they go back to the shadows and they’re unseen.”

Dayan says that makes it hard for veterans to trust.

“Trust is fundamental,” he says. “It goes beyond. “The vets, when we invited them [to be interviewed for Reason, Dayan’s new play], they didn’t trust us. Who were we to tell their story?”

That’s why for Reason, which premiered at the Boulder International Fringe Festival and was revised and revived to show as part of Veterans Speak, Dayan created a way that could bridge that divide and built trust: an imaginary, experimental treatment program that puts struggling vets together with members of the civilian population — many being members of military families — who are facing similar issues.

“If instead of looking for the same brotherhood that they had back in war, if you can allow them to have that camaraderie with the families, then you’re bringing them back to society,” he says.

Reason brings together a suspended drone pilot, an ex-Marine, the wife of an infantry officer, and the mother of a wounded soldier on life support, forcing them to confront their issues together.

“It’s about the impact of war and how to treat it,” says Dayan.

Dayan is careful to draw distinctions between post traumatic stress disorder and other forms of mental residue from war, issues like depression, insomnia and suicidal impulses, some of which can be connected to PTSD, but can also exist on their own.

“The whole thing of diagnosing PTSD has been a very difficult thing, because they’re trying to prevent people from getting the benefits that come with it,” he says.

To research the play, Dayan did a lot of reading, as well as interviewing members of the military, often with a friend — a former member of the Air Force — alongside him to help build trust.

“Before you start writing something, you don’t get the code,” he says. “And a lot of the codes have to do with the word ‘trust.’ So much of it has to do with trust. Originally, you’re thinking that two people that have the same information might align with one another. But then you put in that one is a Marine and one is in the Air Force and you have a problem.”

Though the list of compelling issues that Reason broaches is lengthy, one that stands out is the character of the suspended drone pilot.

“Until 2004, drone pilots were always pilots,” says Dayan. “After a while, they found that these guys had such egos that keeping them in a small room in Las Vegas, it was very hard to control them. So they tried using younger people, especially with video game backgrounds. So this is a young kid who signed up to go to college because he couldn’t afford it and within a few months, he’s part of this elite group being taught to fly drones in the sky. And everything was great until they got overexposed. And then milion dollar equipment started dropping from the sky.”

Dayan says those after effects can be very difficult to address, in large part because they can be so abstract.

“You’re not even there, you’re outside of Las Vegas and you’re bombing Yemen, which you couldn’t even find on a map a month ago,” he says. “You’re talking about shooting at anyone 16-24, because they’re considered a militant. Was that something that attracted me to it? Absolutely. The other thing that attracted me to it was that it was a position of extreme power and zero risk. Nothing can happen to the drone pilot.”

Nothing physical any way. And that’s what Dayan seeks to address in Reason.

“It’s a little complicated if you’re doing a play that also teaches something,” he says. “There are different realms.”

And Dayan says a big part of the reason that he was able to pull it off was because of a strong cast that was willing to spend months researching their roles.

“It went beyond anything I’ve experienced before,” he says. “I think it’s because of the subject matter, which people really care about and want to make a difference. For me that’s when you know that things are going right. “