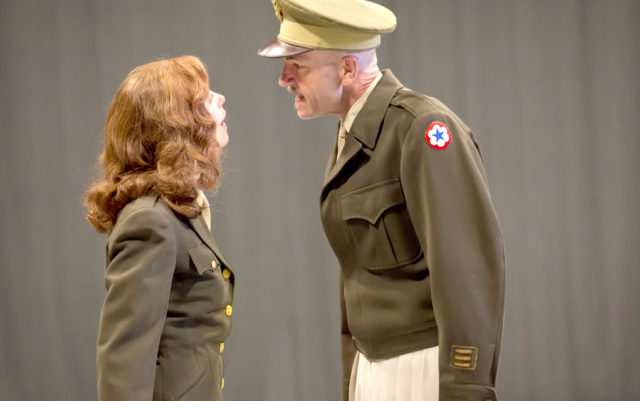 People from Denver and points beyond can have all their talk about “the bubble” and “The People’s Republic of,” but the fact is there is a lot to love about Boulder. Beyond its prime weather and location, you can’t swing a dead prairie dog without hitting a hiking or biking trail, and some of the best skiing/snowboarding in the world is a mere stone’s throw away.

For theater lovers, Boulder also boasts one of the absolute best, annual presentations of the Bard’s works, the Colorado Shakespeare Festival (CSF). Sixty years?! Many theaters and theater companies don’t make it six years let alone 60. The CSF, however, has endured through thick and thin, spectacular triumphs and undeniable failures. For the past 15 years, I have had the pleasure of reviewing the festival, and for my money, the CSF ranks right up there with seeing Shakespeare performed at the Globe in London or at Shakespeare in the Park in New York City. Notably, Shakespeare in the Park is actually a few years junior to the CSF.

To celebrate its sexagenarian status, the Colorado Shakespeare Festival features the three plays it produced during its inaugural season back in 1958, The Taming of the Shrew, Hamlet and Julius Caesar, as well as an abbreviated run of Henry VI, Part 3 and Tom Stoppard’s Rosencrantz & Guildenstern Are Dead. The festival kicked off last week with The Taming of the Shrew and will continue into early August.

For anyone unfamiliar with the source material or any of its many adaptations, for instance 1953’s Kiss Me Kate and the superlatively ’90s 10 Things I Hate About You, The Taming of the Shrew is a comedy about sweet, young Bianca (Rachel Turner) and her quick-witted, sharp-tongued sister, Katherina (Shelly Gaza). In order to thwart Bianca’s many suitors, including Lucentio (Christopher Joel Onken), Gremio (Sam Sandoe) and Hortensio (Casey Andree), Bianca’s wealthy father, Baptista (Robert Sicular), forbids Bianca from marrying until Katherina has been wed.

Enter Petruchio (Scott Coopwood), a friend of Hortensio’s from out of town who is himself, conveniently enough, in the market for a wife. A true gold digger, Petruchio doesn’t care what his wife looks like or what kind of person she is so long as she comes from money. His only criterion is that his future wife has a great, big, juicy… dowry. Upon hearing about the whole Bianca-Katherina situation, Petruchio decides to woo Katherina, a decision Bianca’s suitors cannot support more enthusiastically.

Next to the verbal jousting of Beatrice and Benedick in Much Ado About Nothing, the no-holds-barred, out-and-out war of words between Katherina and Petruchio is some of Shakespeare’s wittiest writing. While Petruchio’s plan to break Kate’s will using one of the world’s earliest documented examples of gaslighting can present as somewhat problematic to modern audiences, the development of their relationship is undeniably organic and truly entertaining.

With so much of The Taming of the Shrew riding on the interplay between Katherina and Petruchio, I found some of director Christopher DuVal’s choices puzzling. While Scott Coopwood is an accomplished and assured actor, he presents as a bit on the old side for Shelly Gaza’s Katherina. With this Shrew being set in post-WW II Little Italy in New York, Coopwood plays Petruchio very much in the mold of General Douglas MacArthur, which only amplifies the perceived age difference. That coupled with the unavoidably abusive nature of Petruchio’s approach to “reeducating” Katherina distanced me from this central relationship and, therefore, the play as a whole in a way that I have not previously experienced.

There were also problems with the sound on opening night that dramatically detracted from the experience. Knowing the level of excellence the CSF maintains, I am certain that issue will be addressed for future productions and that audiences for the rest of the festival will enjoy both The Taming of the Shrew and Julius Caesar in the beautiful Mary Rippon Outdoor Theatre as well as Hamlet and Rosencrantz & Guildenstern indoors at the University Theatre.