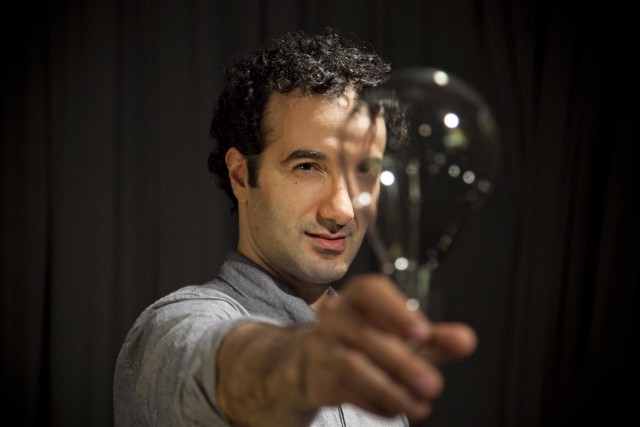 Jad Abumrad, host of NPR’s Radiolab, doesn’t know exactly when it happened. Maybe it was as the show started climbing the podcast charts, maybe it was when it won a Peabody, or maybe it was around the time he was personally awarded a MacArthur “Genius Grant,” but he says that somewhere along the way program directors started asking him just how Radiolab happened.

On the surface it might seem like a cop-out answer to a somewhat naïve question. Radio is radio, a format made with smooth-voiced hosts chatting up engaging guests in interviews arranged by producers as bumper music fades in and out. Perhaps it gets thrown to a field reporter now and then.

Except for Radiolab. The hour-long show is equal parts investigative journalism, avant-garde electronic sound collage, and teenage slumber party, with Abumrad and his co-host Robert Krelwich engaging in the sort of giddy, wide-eyed rapport about the mysterious and fantastic that one expects of flashlight-lit conversations in a bedroompitched tent. What started more than a decade ago as Abumrad hosting a mixed-bag program of documentaries to fill a lonely weekend time slot has grown to be a format-busting monster that is just as likely to stage a ballet to illustrate a scientific principle or get a museum to 3D print and display all the objects discussed in a particular report as it is to interview an erudite author. In America, Radiolab is the third-most downloaded podcast from the iTunes store, with nearly 2 million listeners per episode and more than 5,000 customer ratings, all of them 5 stars.

So it’s natural to see why programmers would want to know how such beautiful chaos came to be, and why Abumrad might not be able to pin it down.

“So, journalistically, I started trying to figure it out,” he says. The quest of self-examination Abumrad embarked on was winding, leading him to elements of psychology, Cherokee mythology, Texas Hold’em poker and Wagner’s Ring Cycle, all things he says he thinks about when putting together Radiolab. And the result is a new solo stage show that he will be bringing to the Boulder Theater on Wednesday, Oct. 15: Gut Churn.

“I’m stringing together a bunch of video and a bunch of music and a bunch of stuff that we’ve aired,” he says. “And I hope it will feel like a show, but a little bit looser. Like a meditation, but it will move the way the show moves.”

Abumrad says the subject matter will be as mixed as the media.

“Stories of how the show came about, sort of the inside story of Radiolab,” he says. “But also a real whirlwind way of thinking about creativity and what to do when you get struck in the creative process.”

Abumrad says he has developed a whole series of ways to stabilize himself during those moments of being creatively stuck and “feeling like a jackass,” and that Gut Churn will be his effort to share them.

Over the six to eight months it can take to produce an episode of Radiolab, Abumrad says it’s almost a given that the content will begin to seem stale, and that he and Krelwich must search for ways to revitalize or reframe it.

Here’s an example he says is typical. “Sometimes, we’ll have this really beautiful thing that’s really finely constructed, but it doesn’t have that anarchy,” he says. “So we will both say, ‘We have to fuck this up.’ So we know the story, we’ve gone through it a hundred times. We know the scenes, and we’ll start improvising and we’ll start trying to knock each other off our game. He’ll try to mess me up and I’ll try to mess him up, and we’ll be making jokes. And we do that until we clear some space. And the experience when you’re listening is you’re like, ‘oh, I get this story,’ and then it doesn’t make any sense. I love that feel of when you’re bouncing between something that’s really tightly cut and something that could explode.”

Of course, a big part of the ability to overcome that situation is the interplay Abumrad has with Krelwich, a creative mental connection Abumrad describes as “Jedi-like.” But the strategies he will discuss in Gut Churn have been applied solo as well.

“He and I can connect in a way that I don’t think I’ll ever have with anyone else.

But we are also very different in what we’re interested in,” Abumrad says. “I would never pigeonhole him. ’Cause his interests are so wide and varied. And he’s voracious in what he’s interested in. But he does like to do core basic science reporting. Give him some little mollusk that has 17 sexes and he’ll be happy. And he’ll do little pieces about some cool bird. I like that stuff too. So there’s overlap between us. But there’s a kind of story that I really like that somehow intersects music, and culture and philosophy and spirituality. So left to my own devices, I will migrate away from core science reporting and I’ll go towards things that are a little more esoteric and speculative.”

Recently, Abumrad flew solo to investigate the cultural history of nihilism, an episode where the ultimate goal was to discover how the cover of a book written by Abumrad’s brother-in-law ended up on a T-shirt worn by Jay-Z in a music video. Esoteric intersection of music and philosophy indeed.

“Had Robert not been on vacation, I would have sat him down and had him be a little bit of a foil,” he says. “I would have kept him completely in the dark and then had him listen, ‘So here’s this weird thing that happened to my brother-in-law.’” But it flips both ways. “When I was on vacation he did a story about a bird, about a weird conversation drama with a whooping crane,” says Abumrad. “That was a bit more in his wheelhouse.”

Abumrad says that Krelwich tends to think in big, broad concepts, whereas he prefers to pull a small thread and see what it unravels.

One subject they’re both thinking a lot about lately is football.

“I really want to do a show on football,” he says. “I feel like it’s going to disappear. It’s on its way out. It’s a good time to do it before it disappears.”

“Radio should be evolving at the pace of every other medium,” he says. “But it tends to putter along and take this very long, slow evolution, whereas TV is constantly re-evaluating itself over and over, and if something doesn’t perform, it gets axed. We don’t have those kinds of pressures, and I want that.”

And to achieve that end, Abumrad is all about experiments. It’s even why he’s doing Gut Churn.

“Part of me doing this talk tour is doing a little experiment,” he says. “It’s not a huge experiment. If I fall flat on my face, which could very well happen, it’s not the biggest deal.”