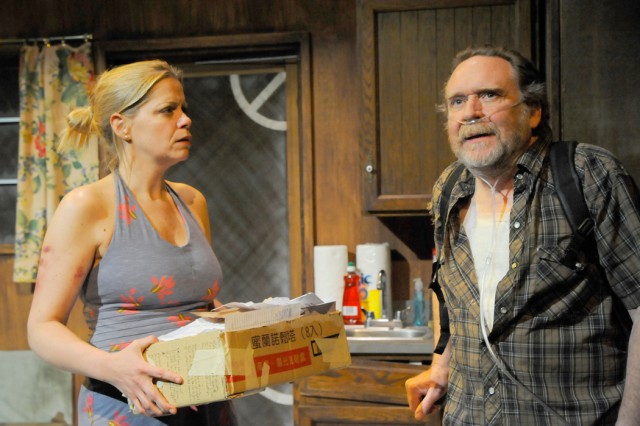 Color me a hopeless romantic, but I say fuck Valentine’s Day. Sure, the holiday has its liturgical and secular historical bases, but as it exists today it is nothing more than a crass, commercialized cash grab that mocks relationships and commitment while purporting to celebrate them. In the vast majority of cases, Valentine’s Day has as much to do with pure love as St. Patrick’s Day does with the banishment of legless reptiles from the Emerald Isle.

Love knows no measure, and love knows no bounds. It has as many definitions as manifestations, and none have anything at all to do with Hallmark greeting cards and chalky candy hearts. (What is it about religion and cannibalistic iconography?) How wonderful it is, then, that Boulder’s preeminent theater company, the Boulder Ensemble Theatre Company (BETC), has chosen to present an honest, meaningful depiction of love in all of its flawed and passionate glory over this year’s Feast of Saint Fraud-entine.

Annapurna, written by Sharr White, takes its name from the Nepalese mountain that was the first 8,000-meter (26,247 feet) peak to be summited. The leader of that fateful mountaineering expedition, Maurice Herzog, titled his chronicle of the journey Annapurna as well. In the decades since it was published, conflicting accounts of what happened to Herzog and his team have surfaced.

Those accounts, which are generally accepted as more accurate descriptions of the harrowing trek, illustrate the subjectivity of both experience and memory. Annapurna, the play, focuses on this aspect of human nature and uses it to power a gripping and highly amusing tale of true and messy love.

The play opens with an extremely improbable reunion. Out of the clear blue and after decades without any contact, Emma (Kate Gleason) shows up on the doorstep of her ex-husband Ulysses’ (Chris Kendall’s) mobile home in “the ass crack of the Rockies,” Paonia, Colo. Scratch the marketing-birthed “mobile home.” Ulysses’ abode is a trailer sitting in a stereotypical trailer park populated almost exclusively by “CDS” types. CDS, we’re informed, describes people who can’t do shit, lost losers hiding out from the world and, in some cases, simply waiting to die.

Why Emma has returned after so many years and, perhaps more importantly, why she left so abruptly in the first place, are too central to Annapurna for me to discuss here. What I can divulge is that the relationship between these two damaged souls is as vibrant, touching and credible as any you’ll see depicted, on stage or otherwise. Playwright Sharr White deserves credit for some of this (and after seeing his vaguely disappointing but perplexingly lauded The Other Place I’m happy to see the improvement), but the bulk of my praise is reserved for Gleason, Kendall and their director, Rebecca Remaly.

Remaly, a seasoned director of BETC productions and co-founder of the company, nails every aspect of Annapurna. She and Set Designer Ron Mueller have created a wonder with Ulysses’ trailer, where all of the action unfolds. The trailer is constructed cut-away style, which gives the actors nowhere to hide and emphasizes their characters’ vulnerability. Remaly and Costume Designer Brenda King clothe Emma and Ulysses simply and fittingly. For many audience members, Ulysses’ first “outfit” will be remembered for years to come.

It is Remaly’s work with her actors, however, that allows Annapurna to summit greatness. As I’ve noted before, Kendall is an actor’s actor as defined by the fact that he is nearly unrecognizable from role to role. As believable as he was as a New York Rabbi in the 2012 BETC production of Elijah: An Adventure, he disappears even more completely into the published-poet-turned-trailer-trash that is Ulysses. Matching him stride for stride, Gleason makes the complicated character of Emma completely relatable and supremely sympathetic.

By way of illustration, late in the play when Emma asks Ulysses if he really thinks she returned solely for his benefit, Gleason’s delivery of that one basic query gently but insistently forces the audience to question everything that has come before. If you’re anything like me, the answer to Emma’s question is sweeter than any heart-shaped box full of sugary distractions.