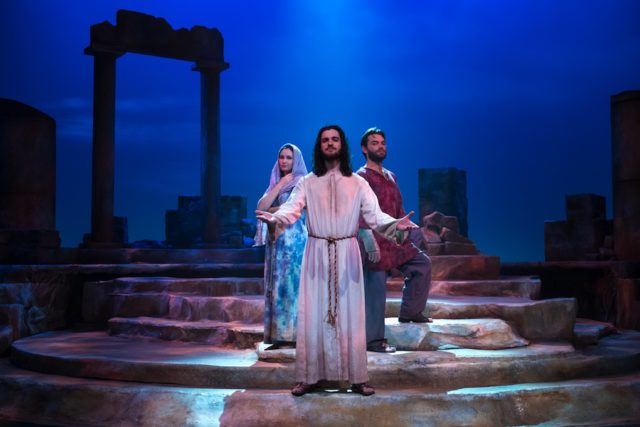 Andrew Lloyd Webber’s hit musical, Jesus Christ Superstar has been around for nearly 50 years, and the story of the show’s namesake has been along for quite a few years longer. Yet, I can’t say I’m too familiar either.

Never a huge fan of Webber’s other works and an avoider of anything with heavy religious undertones,  the musical sat in the cross section of a venn diagram of a few of my least favorite things.

But as a self-proclaimed musical theater buff, I never discount a show without seeing it and since the musical has such a strong following, I was excited to give it a shot with the Arvada Center’s new production, playing through April 16. Finally, I get what all the fuss is about.

Superstar ambitiously tackles the Gospels’ retelling of Jesus’ last week, complete with the Last Supper and his crucifixion. Sans dialogue, the rock opera foregoes telling the story through only power ballads instead. The characters are nuanced, the songs are punchy and the Arvada Center’s production pulled off the show superbly.

Debuting on Broadway in 1971, Superstar was one of the first rock operas to take the stage, joining the ranks of Hair and later Godspell and Grease. But while Hair used the music of the day to explore its current political climate, Superstar utilized the modern-day music to tell a classic story. Stretching the musical theater genre further than its predecessors, Superstar cemented its place as a trailblazer of the artform.

In 2017, the music still holds up. The songs feel fresh and in no way outdated. The music is memorable and lyrics are punchy. Each song stands on its own yet complements the others, and the catchy quality of the entire song list stays with you days after the show. (If anyone knows a good way to get “What’s the Buzz” out of your head, feel free to let me know.)

The show’s story is known far and wide, but as someone who’s never spent much time studying the Bible, Superstar’s story was slightly confusing to follow. As if watching a modern-day biopic, it left me wondering which parts were true and which were embellished for dramatic effect. Because of the lack of dialogue, occasionally both the characters’ roles  and their motivations were fuzzy. But never did this bog down the show. With quick pacing and high energy numbers, I eventually just sat back and enjoyed the performance without over-analyzing the plot.

This was easy to do during the Arvada Center’s entertaining production, with quality sets, costumes, orchestrations and choreography.

Arguably the most striking element of the show was the talent of its cast. Not surprisingly, the standout performance goes to the show’s namesake Jesus Christ, played by Billy Lewis, Jr. From his first note, Lewis stunned with a powerhouse voice.  In each scene  he  achieved the subtlety necessary to play the good-natured, yet overwhelmed Son of God.

Lewis was backed up by solid performances from  Matt LaFontaine as Judas and Jenna Bainbridge as Mary Magdalene, both of whom shined as these Bible heavyweights. Superstar also boasted a talented chorus that provided energy and panache to each song they were in.

One of the best parts of the night came during the upbeat number “King Herod’s Song,” when local theater gem Wayne Kennedy took the stage to mock Jesus and dance around the stage as Herod. Kennedy spiced up an already-great production, infusing the character with humor and personality. No matter how much stage time Kennedy gets — and in Superstar it’s a few minutes at best — he always manages to be one of the highlights of every production he’s in.

Seeing classic shows for the first time is always a gamble. Many times they don’t live up to their hype and you leave the theater questioning if you’re crazy or if everyone else is. But Jesus Christ Superstar far exceeded my expectations to provide a fun and thoughtful night of theater. Whether a newcomer or veteran fan, Superstar is a delightful romp for anyone, and Arvada Center does the show justice.