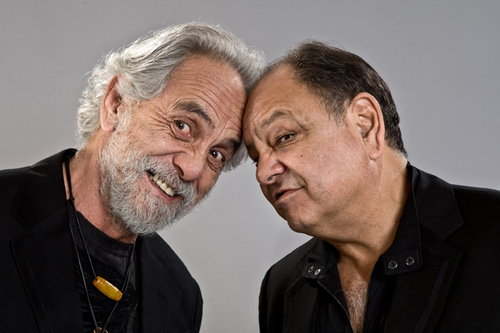 “It’s getting closer all the time,” says Cheech Marin about what he calls the “quasi-legal” state of marijuana use in America. “You can walk down the street of just about any city smoking a joint, and nobody’s gonna hassle you. It’s ridiculous that it’s not legal. Sometimes our country has this puritanical element about it that just pops up like a mutant gene.”

“The recreational use of it is what’s kept it illegal for a long time — any excuse to stomp on people’s freedoms,” adds Tommy Chong. “We’re really close to legalization, and I think that everybody concerned, we’ve gotta keep pushing it off the cliff. We got it up to the top, now we just gotta push it over and really get it legal, instead of this don’t-ask-don’t-tell approach.”

On the heels of their hugely successful Cheech & Chong: Light Up America reunion tour, and with Chong’s 2003 federal bust, conviction and incarceration for paraphernalia trafficking now fading memories, it’s no surprise that the duo would crank it up a notch in the ongoing battle for legalization. The national laws surrounding pot use are in their death throes, and who more fitting than the iconic comedy team to deliver the coup de grace? The press release for the forthcoming 17-city Cheech & Chong: Get It Legal tour reads, “Cheech and Chong are fusing comedy and activism as a means of bringing attention to the harm caused by marijuana prohibition.” But comedy as activism is nothing new for these American originals, whose major contribution was forging drug humor into a cultural institution.

“Obviously that’s the history of our lives,” says Marin, more than four decades after teaming up with Chong. “Our comedy shows the lighter side of this whole drug situation, especially marijuana. We choose to make fun of it and show the lighter side of it rather than the clenched fist-inyour-face approach. We’re just trying to make people laugh. Laughter is the ultimate cure for anything that ails us. Must be far as politics goes, we’re not into politics — we’re into laughter.”

Chong couldn’t agree more: “Instead of just going out and being funny, our show — thanks to the government — now has a message, and the message is that even though we’re laughing, what we’re doing is illegal. Until we change those laws, we’re all at the mercy of the law enforcement community. We can be arrested and we can be searched. So
we’re asserting our rights as American citizens to pursue happiness so
we don’t have to be worried about being arrested for, really, taking
our medicine.”

Spawned
from the counterculture, Cheech and Chong found their winning niche as
a comedy stage act in the late 1960s, opening concerts for major rock
bands like the Rolling Stones and Santana. By 1971, music producer Lou
Adler had discovered the duo, and between 1971 and 1985, nine hit
comedy albums followed. Nominated for four Grammys over the years,
Cheech and Chong won Best Comedy Album for their 1973 release, Los Cochinos. Then came the movies. The first of eight successful films, 1978’s Up In Smoke ranked
as the highest-grossing comedy for that year, roping in more than $100
million. But by the mid 1980s, after reaching the pinnacle of success,
Cheech and Chong entered what eventually mutated into a 25-year hiatus
as they took diverging career paths.

“We
both knew that we could do it as long as we wanted, but we had done it
for so long that we were sick of each other,” says Marin. “You know, we
were together for 17 years. That’s a long time, especially in comedy.
With a duo, compromise is what drives it; at some point, after a bunch
of success, you getsick of compromising.”

Then
finally, in June of 2008, after years of false starts and rumors of
possible reunions and phantom movie deals, the duo officially announced
a new tour along with a new film in serious discussion.

“We’d
been trying to get together for a long time,” says Chong. “When Cheech
was ready, I wasn’t. When I was ready, Cheech wasn’t. With Cheech and
Chong it was always very cosmic. Everything came together when it was
supposed to. He sort of ran out of projects. I kinda ran out of
projects, and we looked at each other and said, ‘Here we are. Let’s do
it.’” What followed was performance after sold-out performance as
America’s sorely missed dope humorists once again hit the road,
reigniting the old stage shows that had brought them their initial
renown, doing vintage favorites like “Ralph and Herbie,” “Earache My
Eye,” “Let’s Make a Dope Deal,” and “Pedro and the Man.” According to
both Chong and Marin, reuniting after so many years was a matter of
instant chemistry.

“It
was so simple it was almost frightening,” says Chong. “It’s a funny
thing; people remember us from 20, 30 years ago, and now we’re totally
different people. But for some reason it all worked. I don’t know what
it is, but it worked. Itwas so easy, and we were both surprised. It took about five minutes.”

“It
felt like we had been away for 30 seconds and not 30 years,” adds
Marin. “That’s the amazing part about Cheech and Chong — that stoner
force [laughs]. You can’t argue with it.”

Nor can you argue with the idea of a new doper film. Cheech and Chong are about to become animated characters in Cheech and Chong’s Smokin’ Animated Movie. Back in 2008, the animators at Chambers Bros.

Entertainment
joined up with the producers at Big Vision Entertainment, soon
acquiring the rights from Lou Adler to animate some tracks from Cheech
and Chong’s classic albums.

“It’s
flash animation of a selection of our old record bits,” says Marin.
“It’s interesting to hear them after so long. And the funny thing is
that the voice track is much more sophisticated than the animation, and
you can really see how layered and how subtle and dense we made those
recordings. They’re coming out really well.”

“It
started out as a simple little project and has mushroomed into a
featurelength movie,” adds Chong. “We’re 70 percent finished. I’m not
really surprised that it’s so good because when Cheech and I did the
albums back in the day, we just went in with a clear mind and clearconscience and had a good time. And so now it’s visual and we’re still alive. It’s really an exciting project.”

For
Cheech and Chong, it’s always been about passing the torch, and the new
animated film only reignites the stoner humor tradition for new
initiates in the digital age. But there’s something else too — some
other ingredient that gives Cheech and Chong a multi-generational
appeal that has lasted for what will soon amount to five decades.

“It
feels right. It feels natural. We get the same feeling now that we’ve
always got from the people,” says Marin, explaining the phenomenon.
“It’s the exact same reaction from the day we started. It’s amazing
when I look out into the audience; 80 percent of the audience is
between 30 and 40, which means most of them were not alive the last
time we were on stage. I see a lot of other acts, and there’s nobody
like us. Nobody has lasted so long and then come back 30 years later
and done a sell-out national tour. We’re not threatening, but we don’t
shy away from anything either. We confront all these issues in a very
footsoldier-of-the-revolution point of view. This pot thing kinda goes
across every generation. Everybody can relate to it.”