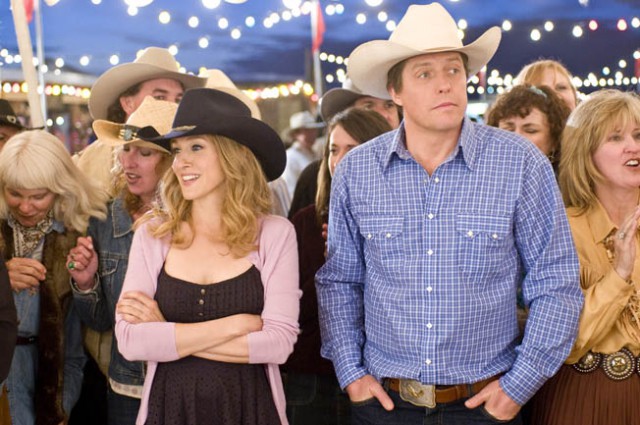 Pure, communal silence can be a wonderful thing, and if you haven’t experienced any lately, I recommend you see the first available screening of the new romantic comedy Did You Hear About the Morgans? Each of its theoretical punch lines is preceded by an eerie second or two of dead air, followed by the joke-like “payoff,” guiltily delivered by one of its game cast members, followed by a longer awkward pause. It’s not just the sound of crickets you hear watching this movie. It’s the sound of dead crickets.

Hugh Grant and Sarah Jessica Parker play the Morgans, a Manhattan power couple on the outs and the brink of divorce. He cheated on her, citing reasons of infertilityrelated stress; she is not in the forgiving vein and has already begun thinking about adoption on her own. He wants her back and proposes a trial reconciliation dinner — after which they witness a murder, which makes them targets themselves.

So, it’s off to FishOutOfWaterville. Plonk, they’re plonked into the federal witness protection program, and these liberal blue-state weenies are mixing it up with the red-state, red-meat, red-blooded folk of Ray, Wyo.

Grant’s character is confronted by a grizzly and by a rodeo; Parker’s character learns she’s a dead-eye with a rifle. (Sam Elliott and Mary Steenburgen, dignity intact, portray their temporary hosts.) At one point the Morgans share a bull costume, otherwise known as writerdirector Marc Lawrence’s script.

Rooting interest? Couldn’t be lower. I like Parker and, even though Grant looks genuinely pained in Morgans, I like him. For the premise to work, though, the Morgans’ pathetic dependency on their BlackBerrys and general sense of privilege would have to be funny, so that we enjoy seeing them knocked down a few pegs. Lawrence made a respectably entertaining rom-com for Grant opposite Drew Barrymore, Music and Lyrics. But when so many films in this battered genre make money, from Bride Wars to The Proposal to The Ugly Truth, Hollywood really has no meaningful incentive to do better.