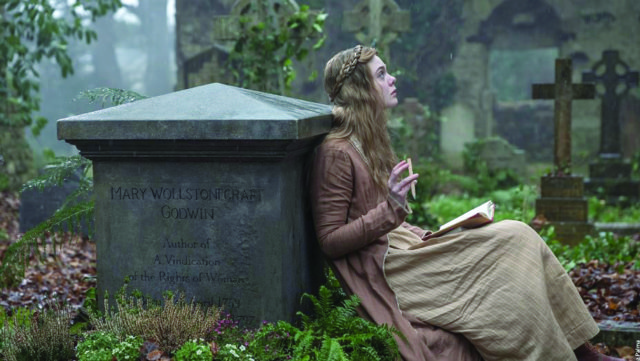 Wanting for my happily-ever-after, I lowered my defenses, forgetting the first lesson I was taught: That I was brought into this world to be abandoned; that I am irrevocably alone.  —Mary Shelley

It’s been 200 years since the publication of Frankenstein; or, The Modern Prometheus, the famous story of a mad scientist and his reanimated creation. When the first printings ran, the sensational novel was attributed to “Anonymous,” though famed English poet Percy Shelley penned the introduction. Many took this to mean Mr. Shelley was responsible for Dr. Victor Frankenstein and his creature, but they were led astray by a publisher who feared the book would garner little acclaim and fewer sales were it published under the true author’s name, Percy Shelley’s 20-year-old wife: Mary Wollstonecraft Godwin.

It’s a familiar story and Mary Shelley, the new bio-pic from director Haifaa Al-Mansour, is a familiar sort of film.

Elle Fanning plays the young author. Her father, William Godwin (Stephen Dillane), a philosopher and bookseller, raises her but doesn’t know what to do with her; though he looks on fondly as Mary peruses his vast collection.

“To love reading is to have everything within your reach,” he tells her. Godwin vacillates between scorn and understanding when Mary runs off with Percy Shelley (Douglas Booth), a trust-fund baby with a wife and kid already in tow.

Mary’s love for Percy is liberating. After they make love for the first time, Mary scribbles “I am free to write what I please” in her diary. Soon her life is filled with daytime drinking, poetry recitations and the occasional escape in the middle of the night from Percy’s debt collectors.

Joy quickly turns into misery. Mary gives birth, but loses the child at a young age; Percy wanders from Mary’s bed to her friend’s, and a fortnight getaway to Lord Byron’s castle — with Tom Sturridge playing the bloodsucking poet — only reinforces Mary’s realization: being an artist is a heck of a lot of fun if you’re a man. Watching Mary move through this world — the star of her story, but forever a background player — it’s no wonder her novel of a lost soul desperately craving compassion ends with: “He was soon borne away by the waves, and lost in darkness and distance.”

Mary Shelley is the second feature from Al-Mansour. Her previous film, Wadjda, is one of the best in recent memory. Set and shot in Al-Mansour’s native Saudi Arabia, Wadjda beautifully and effortless captures the plight of women in a strict and imposing society.

And while Mary Shelley occupies similar territory, there is little that connects the two. Only Al-Mansour could have made Wadjda while Mary Shelley smacks of anonymity. Only one scene, where Mary finally sets pencil to paper and feverishly writes Frankenstein, does Mary’s passion and Al-Mansour’s creativity burst forth. It’s probably the scene that attracted Al-Mansour to the project. What a wonder it would have been if the rest of the movie sustained the same energy level.