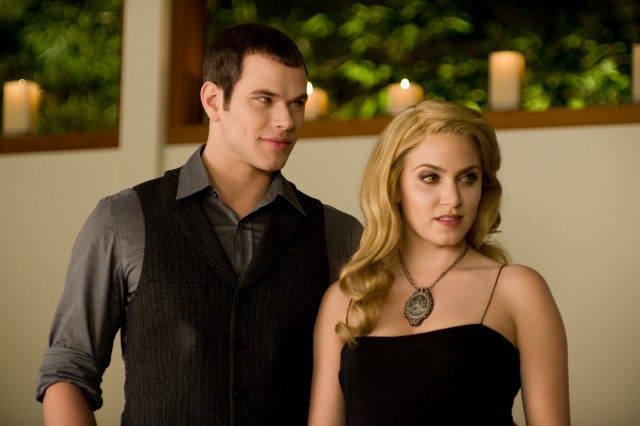 Filmmaker Chris Weitz said that he knew the Twilight phenomenon had gone off the rails when the female
immigration officer at the Canadian border already knew who he was. And when
paparazzi pictures of him and his family eating hot dogs showed up on the Internet.
And when he faced the audience at July’s Comic-Con convention in San Diego.

“I don’t know if you’ve ever been confronted by 7,000
screaming girls,” he said. “But it’s a loud sound.” And Weitz is
just the director — which would seem an impolite thing to say, if Friday’s
release of The Twilight Saga: New Moon
wasn’t poised to eclipse everything in its path.

The second in the series based on Stephenie Meyer’s YA
vampire novels, New Moon will further
the cause of making otherworldly superstars out of whom Weitz called his
“big three”: Kristen Stewart, Robert Pattinson and Taylor Lautner,
all of whom have already become objects of fans’ adoration and media scrutiny.

Their continued involvement in Twilight adds a dark note of celebrity overkill to a story
already steeped in adolescent passion and impossible romance: The virginal
Bella Swan (Stewart) is in love with the vampire Edward Cullen (Pattinson). And
while he resists her willingness to go over to the dark side, he also risks
losing her to Jacob Black (Lautner), a member of an American Indian tribe with
a few undead skeletons of its own rattling around in the closet.

As we rejoin our program … the Cullen clan is throwing a
party for Bella’s 18th birthday, but when she accidentally cuts her hand, the
ensuing flurry of blood lust among the immortal guests convinces the Cullens to
leave their Pacific Northwest town for Bella’s own good. What ensues is
precisely the kind of frustrated teenage love story explored by writers from
Shakespeare down to those who carve their initials in trees. Meyer is always
going for ultimate pathos, but her stories also prove that successful melodrama
is usually not about what it pretends to be about: The Twilight series may be set among vampires, but its subtext is
pure wish-fulfillment and fantasy.

“It puts everyday romantic dilemmas into a supernatural
context,” said Weitz. “And things play out in the ways one might
imagine they would play out in everyday life, but don’t.”

Weitz replaced Twilight
Director Catherine Hardwicke. “It’s like Harry Potter,” he said, “They’ll have a new director on
each film” — although that wasn’t the plan originally.

He said another aspect of the tales that drags female
audiences of all ages into “New Moon’s” orbit is its almost chaste
attitude toward . . . well, you know.

“The way it addresses teen sexuality is very considered
and safe,” said Weitz, whose American Pie was anything but. “The heroine is a virgin and it’s addressed
that she’s a virgin and that is something respected by her boyfriend; he’s very
careful and protective of her. That’s a bit of a throwback, in a way. Actually,
the fact that you mention the virginity of the character at all is a bit
shocking.”

Vampire stories are always eroticized — as Weitz points out,
the exchange of bodily fluids is a fairly intimate thing, even if you may not
want to examine it all too clinically.

“You want to take people on an emotional ride, not
necessarily an intellectual one,” said Melissa Rosenberg, who thus far has
scripted three Twilight films (the third
Twilight Saga: Eclipse, directed
by David Slade, completed shooting two weeks ago). “If you’re just writing
about passion, you’re doing, I don’t know what — soft core? There has to be a
journey. So it’s really a coming-of-age story — it’s about Bella becoming a
stronger person. And by the end she has a life as she’s created it for herself.
The heartbreak is the whole idea of ‘what doesn’t kill you makes you
stronger.'”

Rosenberg said the attraction of Meyer’s hugely best-selling
books is rooted in their point of view, something which can’t be replicated on
screen — nor should it be, necessarily.

“The way Stephenie writes is very intimate,”
Rosenberg said. “You are inside that character’s head; there’s no editing.
You’re in her emotions and they’re very raw and real and she keeps it intimate
and that draws you into the storytelling in such a compelling way that I think
that’s what gets people engaged.”

Beyond that, she said, there’s a really rich mythology that
Meyer grounds in reality.

“The challenge of doing the screenplay,” said
Rosenberg, currently splitting her time between Twilight and the TV serial-killer show Dexter (“Yeah, I like blood,” she said with a
laugh), “is how you maintain that tone when you’re not literally inside
Bella’s head.”

Still, she said, the film — not intending to kill the golden
goose — has been extremely faithful to the book, a point echoed by Weitz.

“When I read the book — which I did in one gulp, the
way a fan would — I saw how it really deals with melancholy and loss and a lot
of deep-dish stuff,” he said. “I had wanted for quite a while to do a
fantasy epic thoughtfully — I thought my last movie, Golden Compass, had been taken from me and recut and I wasn’t happy
with how it had ended up.”

And he said he knew that Summit Entertainment wanted to do
right by the book, and the fans.

“I think they’ll be startled if they expect it to look
like the first movie,” he said. “But I think that what they might be
surprised at is that it’s a very beautiful film.”

It’s never too early to get hysterical: The Twilight
Saga: Eclipse will be released June 30,
furthering the advance of Stephenie Meyer’s vampire chronicle into pop-culture
immortality. As the story picks up, a string of gruesome murders has Seattle on
edge and Edward Cullen suspects a young vampire out of control. Edward and
Bella apply to college; Bella wants to see Jacob; Edward proposes to Bella;
Jacob licks his wounds.

Giving too much away will likely ruin New Moon for those who haven’t read it, although protecting
the plot can’t be a big concern, given the readership. More critical to Summit
Entertainment, the films’ producer, is getting the adaptations made while the
young stars are still young (rather than face the situation of Harry
Potter, which won’t end before Daniel
Radcliffe is getting mail from AARP).

Piggybacking the filming of the four Meyer tales, Eclipse was completed — with director David Slade at the
helm — before New Moon was even
released. No doubt Breaking Dawn,
the fourth novel and one to which Summit owns the rights, will begin shooting
before Eclipse hits the screen,
although a director has yet to be announced.