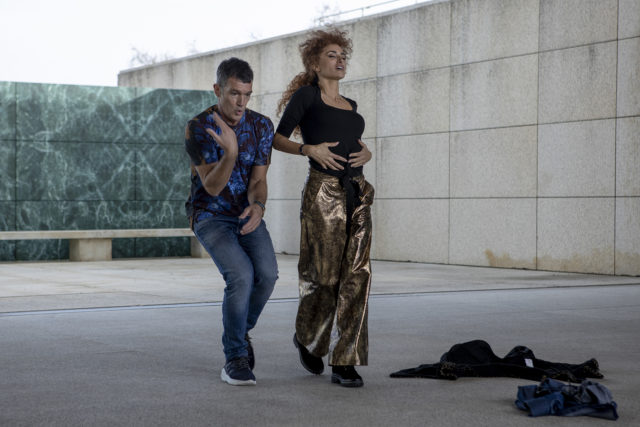 Don Humberto (José Luis Gómez) has turned 80. He’s the head of a pharmaceutical company that has made him filthy rich. Still, he gets no respect. He knows this because he knows how others see him: obscenely wealthy with no reputation. He must do something, build something, make something he can slap his name on so others will remember him fondly. A bridge, perhaps? Or maybe a movie? “You want to direct a movie?” his secretary (Manolo Solo) asks, taking down dictation. “No, you idiot, what do I know about directing?” Humberto snaps. No, Humberto will finance a movie—a great movie—with the best actors and a prestigious director. And then the world will know that Humberto is the maker of this movie. It will validate his wealth and bring meaning to his existence. Would that it were so simple.

So begins Official Competition, a Spanish/Argentinian comedy that’s as funny as it is sharp. The director Humberto hires is Lola Cuevas (Penélope Cruz), a Palme d’Or-winning filmmaker with an uneven track record and a mane of frizzy red hair. She wants to adapt the best-selling—i.e., expensive—novel about two warring brothers with Félix Rivero (Antonio Banderas) and Iván Torres (Oscar Martínez) as the leads. Immediately, the two hate each other. Félix is a successful graduate of the Joey Tribbiani school of acting, while Iván is cut from the Lee Strasberg cloth. Lola uses it to her advantage, playing one against the other to flesh out the conflict roiling between the two brothers. Lola has nine days to rehearse Félix and Iván before cameras roll, and she’s got a lot of interiority to uncover.

Written and directed by Mariano Cohn and Gastón Duprat, with Andrés Duprat lending a hand in the script department, Official Competition is a staring match between Lola, Félix and Iván. With a massive modern home with little furnishings at her disposal—the vacant headquarters for Humberto’s tax-dodge of a charity foundation—Lola plays the boys like a piano. At first, they are dutiful actors heeding the requests of their director. But once they learn the rules, it’s game on. Félix strikes first and delivers a performance that shakes Lola and Iván to their core. But it’s all bravado and big emotions. Iván then counters with a performance of his own: smaller, quieter, more convincing. But when Iván makes the mistake of going big, Félix is right there and waiting, ready to use Iván’s momentum against him.

Official Competition is a riot. It’s primarily an insider comedy about making a movie, but the strokes are broad enough that anyone can play. From the fabulously wealthy financier who wants to hitch his wagon to famous people for one night of their reflected glory to the eye-rolling drivel critics hurl at filmmakers during a festival junket. Cohn and Duprat, along with cinematographer Arnau Valls Colomer, beautifully use the setting—a piece of architecture Michelangelo Antonioni would have killed for—to emphasize the emptiness of the players while making sure to keep everything funny in the same shot. And that includes Cruz and her spectacular wig.

For more movie reviews, tune into After Image Fridays at 3 p.m., on KGNU: 88.5 FM and online at kgnu.org. Email: editorial@boulderweekly.com.