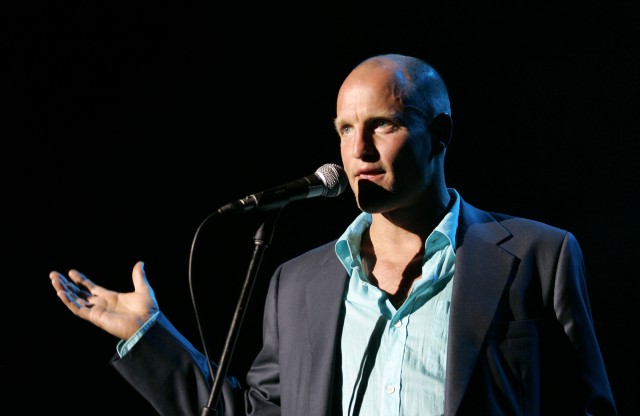 In The Messenger,
Woody Harrelson vividly reminds us that he’s not just a drawling punch line, a
handy hunk of comic relief or ace zombie killer.

As an Army captain relegated to “CNO” —
“Casualty Notification Officer” — Harrelson gives us layers of hurt
under a callous yet needy crust. It may be the best performance of his career
and certainly deserves Oscar consideration.

Oren Moverman’s film tells this CNO story from the point of
view of a wounded vet just back from Iraq. Staff Sgt. Will Montgomery (Ben Foster
of 3:10 to Yuma, terrific) “bled
for my country.” He wears a scar over the eye that he almost lost in
combat. And when he gets home, he’s greeted by the girl he left behind (Jena
Malone), who enjoys a romp in the sack with him before pointing out that she’s
about to get married. Will doesn’t let it phase him. Not that we can see.

But the impact of that latest loss becomes clear as he draws
one last duty he’s to give his country. He is assigned as a CNO. He’ll answer
to a beeper that taps out “S.O.S.,” don his dress uniform and black
beret, and join Capt. Stone (Harrelson) for that sad trip to tell a fallen
soldier’s family that he’s been killed.

“You do not speak with anyone other than next of
kin,” Stone growls. “Avoid physical contact. In case you feel like
offering a hug, don’t.”

That’s practically a code that Stone lives by. He may act
the good ol’soldier boy and enjoy the odd one-night stand here and there, but
nobody touches him. When you witness the work, make a few house calls with
these “angels of death,” you understand. Fathers weep, or worse.
Widows slap them and the neighbors stare mournfully at the duo as they drive
down streets where everybody knows what they’re here to do, and all fear
they’ll be knocking on their door.

Moverman stages these moments of grief and shock in ways
that cannot help but move us — a young woman who didn’t dare tell her angry dad
that she’d married her secret Hispanic beau before he left for combat, only to
be comforted by the man who realizes, in seconds, what a father is supposed to
do. Men and women collapse in pain. Steve Buscemi plays a dad who spits and
lashes out, wants to know why these two aren’t in combat, like the son he’s
just lost.

But one “NOK” (next of kin) gets to Montgomery.
She (Samantha Morton) is hanging laundry. She has a young son inside the house.
She is stunned, but not that stunned. And she seems just as worried for the men
who have to carry out this mission “in a race with Fox, CNN, the Drudge
Report,” to get to the families before they hear the news from somebody
else. Her compassion and dazed reaction touches the sergeant, who takes a
plainly inappropriate interest in the new widow. His ethical dilemma is the
moral compass of the film while the other big relationship is its heart.

Moverman wisely spends most of the movie connecting the two
warriors doing this awful job. The bonding scenes — in bars, fishing,
skirt-chasing — may be cliches, but they give away the desperation of one man,
the despair of another.

There have been other movies covering similar ground – Gardens
of Stone, We Were Soldiers. But The Messenger is the first to get at what Shakespeare had Henry V
say, about men “who hold their manhoods cheap” when in the presence
of others’ war experience and sacrifice. And it’s an unblinking look into the
lives of soldiers doing the most thankless job of all.

Industry rating: R for language and some sexual
content/nudity