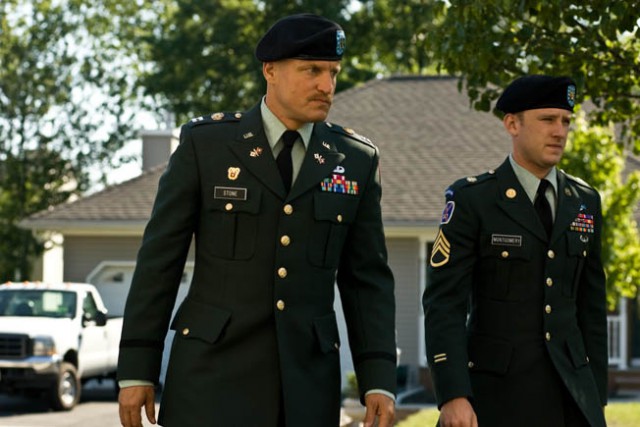 America is an interesting country. Full of contradictions, hopes, failures and, every now and then, surprises. The nation is complex, to say the very least. Perhaps one of the clearest representations of these complexities is the war in Iraq.

While the bulk of Americans disagree with the wars in Iraq and in Afghanistan, they still struggle to tune out the very real effects of it, comfortable with receiving tidbits of information from 30-second spots on national news stations.

So, it’s not surprising that when screenwriter and director Oren Moverman first approached Hollywood with his film, The Messenger, he was met with a resounding “Hell no.” The film focuses on two military officers played by Woody Harrelson (The People Vs. Larry Flint) and Ben Foster (Pandorum, 3:10 to Yuma) who are assigned to the Casualty Notification Service that deals with the raw human emotion associated with being the bearers of tragic news.

But in spite of Hollywood’s predictable resistance, Moverman, who was born in Israel and served as an Israeli soldier and journalist before venturing into screenwriting, wouldn’t accept defeat as an option. The result is one of the most well-received, compelling movies of the year.

“We want people to be aware of the responsibility we have toward people who serve [in the military],” Moverman explains, adding that he was convinced to direct the film after several big names, including Ben Affleck, dropped out.

Not that The Messenger is preachy.

In
fact, Moverman, who co-wrote the movie with writing partner Alessandro
Camon, says it’s quite the opposite. He wasn’t striving to send out a
political message about war at all, he simply wanted to make a film
that touched people’s emotions.

“There’s
no message to tell people how to think or to feel,” he reiterates. “The
film is more than that. It uses humor at many different points. The
ultimate goal is to say this reality exists, and [we should] pay
attention.”

Foster, who first made his critical debut in the acclaimed series Six Feet Under as
the sexually confused Russell Corwin, plays the character of Will
Montgomery, a newbie to Harrelson’s hardened Capt. Tony Stone. Stone
warns Montgomery not to become attached to any of the victims’
families. Of course this is easier said than done, and Will soon finds
himself involved with the widow of an officer, played by Samantha
Morton (Minority Report). To keep the scenes as realistic as possible, Moverman didn’t have rehearsals.

In
the death delivery scenes, the actors had no interaction with one
another until filming, and the scenes were filmed in one shot, to add
authenticity.

“I
don’t ask actors to show me that they know their lines, basically what
we do is talk about scenes; sometimes there’s freedom to invent new
things,” he says. “Samantha Morton and Ben Foster, those are excellent
actors, so it was my job to sit back and observe. It was very
effective, because it was in the moment. The camera was handheld and
moving in unexpected directions and it was shot in one take, with no
cuts. We really let the scene play. It creates a real moment.”

Unlike other films that have emerged over the past few years that focus on the Iraqi war, including 2008’s Stop-Loss and the Golden Globenominated The Hurt Locker, this
film doesn’t linger long on any political implications or messages.
Instead, it explores the depth of feeling and human emotion when
tragedy strikes in a very honest, sometimes humorous way. Moverman, who
made his directorial debut with this film, says that’s what makes it so
powerful.

“I think
every person has their own reaction to the film,” he says, carefully
weighing his words. “People see it in a much more universal way, they
see people in the film trying to get back to life after suffering from
a loss. It’s really a personal thing. The most I can expect from anyone
is to get something personal from it.”

In
fact, that’s the underlying desire for all of Moverman’s works. In the
past few years, the perceptive filmmaker has garnered critical success
writing films like Jesus’ Son and I’m Not There. The Messenger is
his first foray behind the lens, though, and he says that he was up for
the challenge of transforming from a screenwriter to a director.

“The
difference is as a director you’re working with a lot more people,” he
says, adding that he has more projects that include both writing and
directing in the works. “There’s a different set of pressures. But when
you’re writing a script you’re more isolated, you’re working on paper,
and if it works, it will be the basis for the film, it’s not going to
be the film. But at the end of the day, it’s about communication, and
in that respect it’s the same thing.”

Moverman,
who says the script is “never really finished until you finish
shooting,” spoke directly to enlisted officers as well as veterans to
get their input on the realities of dealing withwartime loss. Overall, the response from the military personnel has been overwhelming.

The Messenger opens in Boulder in mid-February

“The film is
definitely supportive of the U.S. Army in the official capacity, which
helped us make the movie,” he says. “They were very grateful that we
portrayed that part that people haven’t seen. In general, military
people are very marginalized because it’s volunteer and there’s a small
percentage [of them]. We were really talking about the people who have
to live with the consequences of deciding to go to war.”

Although
his own experiences in the Israeli military didn’t directly influence
the script, Moverman says that it does show up in a different way.

“I’ve
been to combat zones, so I understood that emotional landscape,” he
says, adding that he shared stories with the cast, and in particular,
his business partner, Ben Foster, to help him get into character.
“Whether that brings more to the movie, I don’t know. But for this film
I think it worked.”

At the end of the day, Moverman says that the movie isn’t really about war at all, but about people.

“I
want people to understand that this is not a depressing film,” he says.
“It’s an optimistic movie; it’s not made to depress anyone or make them
feel bad. It just opens a real channel of emotion.”