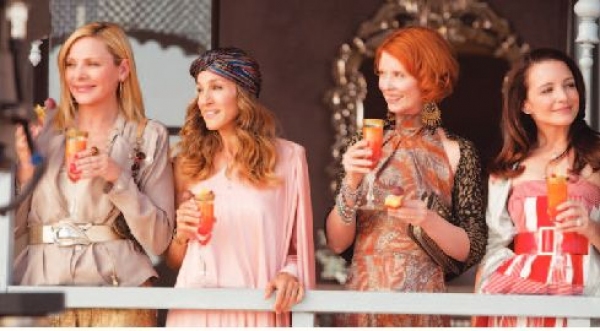 Two years ago, with the world economy about to be credit-defaultswapped right in the kisser, the first Sex and the City feature made $415 million worldwide. Its pre-sold fan base, already nostalgic for Cosmopolitans, heaved a collective, economically envious sigh: Nice to see you four again. By the way, nice shoes.

Now, Carrie, Samantha, Charlotte and Miranda are back for Sex and the City 2, and it’s more like: Oh. You four again. It’s truly a peculiar picture, though sure to be a success, because writer-director Michael Patrick King knows his audience. For an hour or so, beginning with the Top Hat-inspired wedding of Carrie’s friends Stanford (Willie Garson) and Anthony (Mario Cantone), it’s closer to the original HBO series’ comic spirit and blithely raunchy nonchalance.

And a sloggy hour-and-a-half later, you may feel like fomenting a revolution.

To begin with a shallow point: Why have these women, photographed drearily and insanely costumed, become full-on drag queens? They’re barely human anymore, though in Sex 2 the Manhattan women are coping with theoretically relatable problems and relationship tangles. In supremely art-directed splendor, Carrie (Sarah Jessica Parker) and Big (Chris North) argue over whether to go out on the town, or eat in, and whether it’s bad to have a big flat-screen TV in the bedroom. Samantha (Kim Cattrall, who always was the drag-queeniest of the lot) keeps attracting younger men with extremely firm buttocks.

On the flimsiest of pretexts she, Carrie, Charlotte (Kristin Davis) and Miranda (Cynthia Nixon) are junketed to Abu Dhabi. So it’s fun, frolic, run-ins with old lovers (John Corbett shows up at a spice market as Carrie’s blast from the past) and a teensy-tiny brush with crushing Islamic fundamentalist disdain for everything Sex and the City represents as the quintessence of capitalist extremism in quasi-human form.

Many fans of the series will enjoy this wallow, just as they turned out for the first feature, although I wonder if anyone on the planet, including writer-director King, honestly believes Sex 2 makes the most of its running time. The best episodes of the TV series were marvels of compression; here, for every amusing exchange, we’re stuck with two more that run on three times longer than they should. The most dubious sequence has the ladies hitting the stage at an Abu Dhabi nightclub with a rendition of “I Am Woman,” featuring cutaway shots to oppressed women of various nationalities joining in. It’s a joke, but essentially sincere and you wonder: When Helen Reddy first sang about invincibility and sisterhood and wisdom born of pain, did she have runway divas such as Carrie and Samantha in mind?

If Sex 2 were a half-hour HBO episode, nobody would be thinking about the implications of anything. At the show’s peak the ensemble, especially Parker, could sell any conceit, any hypocrisy, any zinger. King’s big-screen expansions of this fantasy universe have their moments, but the padding is outrageous: montages of the gals swanning around in the desert on camels, that sort of thing. In one narrative development, Carrie’s latest book gets a pan. She is devastated, and it’s implied that the (fictional, male) book critic simply wants to keep strong female voices silenced, like the Taliban. Please. I enjoyed these characters more when they were rich, rather than obscenely rich, when their self-involvement and life crises had one foot on planet Earth — and when they weren’t all gussied up like Mae West in Sextette.