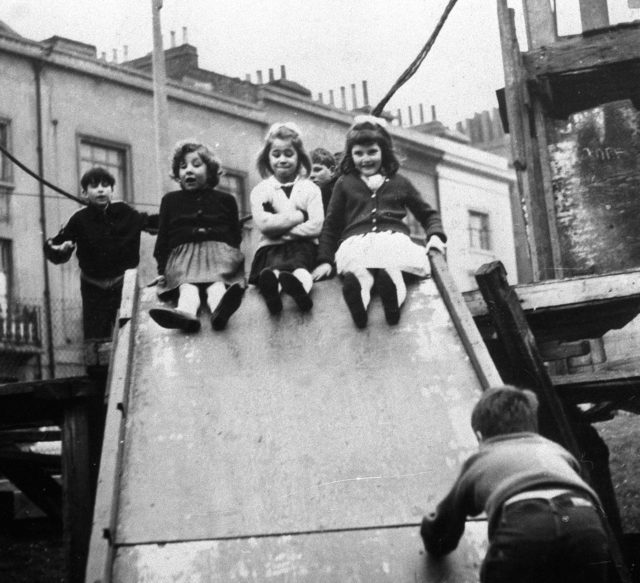 In 1964, Britain’s Granada Television charged researcher Michael Apted to select 14 7-year-olds from disparate backgrounds for the documentary program, Seven Up! Their aim: to get a glimpse of England in the year 2000. “Give me a child until he is 7,” the Jesuit teaches of Francis Xavier goes, “and I will give you the man.”

But if the stated aim of Seven Up! was to see if you could predict the adult based on the child — the 40-minute program concludes with a teaser for their follow-up episode, to be broadcast May 2, 2000 — then the secondary motive was to see how the English class system helped or hindered personal growth.

Apted could not wait. Moving into the director’s chair, he revisited the children seven years later for 7 Plus Seven. Seven years later, he once again sought their participation for 21 Up, and so on with a new installment following every seven years.

Now the participants are 63, and once again Apted turns his camera to Andrew, John, Suzy, Jackie, Lynn, Sue, Tony, Paul, Symon, Nick, Peter, Neil and Bruce, their families, and their pasts. Like previous installments, Apted and editor Kim Horton freely cut back and forth between episodes, painting a picture of similarities and contradictions throughout the years. If you haven’t seen any of the previous installments, worry not, Apted and Horton go to great lengths to bring you up to speed.

Age has smoothed their anger and flattened their idiosyncrasies. The interviews here are not as engaging or electric as in previous installments, and, at times, the wealth of material Apted draws from weighs 63 Up down. When the time comes for 70 Up, Apted ought to break it into multiple episodes. Then again, with each future installment, there will be fewer participants to speak with and questions to ask. As death nears, it tends to occupy the mind more.

Other wrinkles have hindered this installment: The participants are celebrities of sorts and have become frustrated with how their voice “represents” their class/status/heritage. They have grown weary of vocalizing their minds for fear of social media backlash. Apted asks about Brexit and Trump, and their responses are opinionated but measured. A far cry from the anger and condemnation they directed at Apted in 21 Up.

But fireworks be damned, 63 Up is a fascinating watch and a unique social experiment. Did Apted and the powers that be at Granada TV have any idea it would lead to this? Probably not. Lucky for us, they gave it a go anyway.