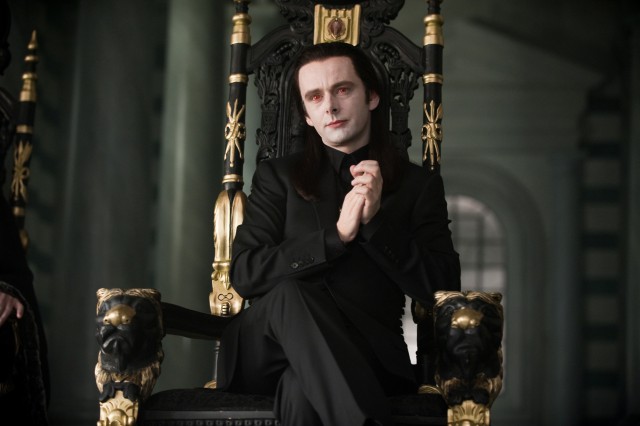 The Twilight Saga: New Moon, also known as “Twilight: The Squeakquel,” is actually pretty good — a tick better than the
first Twilight, which wasn’t bad
either. These are hardly superlatives on the order of “shattering”
and “beautiful,” but compared to the film versions of The
Da Vinci Code and Angels &
Demons, the only two movies ever made with
less sex than the first two Twilights, they’re matchless.

The first Twilight, a
lower-budget and scruffier affair directed by Catherine Hardwicke, may have
been lame in the visual magic department, but its stars and their smoldering
separate-beds bedroom eyes did a valiantly angst-y job in launching a major
franchise. The second film in the series is bigger, better in the effects and
more vibrant visually, which is crucial — the heroine, Bella, is an
Olympic-level mope, and if “New Moon” matched this character’s mood
with the visual palette of the first film, we’d all be dead.

Wisely New Moon
brings back screenwriter Melissa Rosenberg, who continues to prove she has a
much better way with English than the author of the books, Stephenie Meyer. The
director this time is Chris Weitz, who handles this tosh with the commitment it
requires.

When last we left Bella and her vampire boyfriend, Edward,
they’d come through a serious test or three of their endless love. New Moon separates the pair fairly early on, with Edward
nervous about Bella’s safety around his kind. With the boy with the fwoopy hair
off to sunny Italy to deal with the Volturi (Michael Sheen plays the primo
eterno-vampire), Bella pines and pines again, and retreats into herself. Then
she is pulled out of her funk — halfway, anyway; it’s a big funk — by her pal
Jacob, who is sweet and hunky but who is a werewolf, and there’s the treaty
with the vampires, which … well, either you already know all this or you will
never, ever care.

Torn between two hunky supernatural theoretical boyfriends
and feeling like an emo fool, Bella and “New Moon” wrestle with all
sorts of metaphoric issues. Vampirism and werewolfery are just two more high
school cliques. Guys with anger management trouble, hormonal urges that cannot
be satisfied, a succession of pristinely objectified boys — no wonder there are
a few female teenage fans.

Why does New Moon
basically work? Weitz lets the material breathe, and his actors interact. The
film does not try to eat you alive. Kristen Stewart and Robert Pattinson are
interesting to watch. And they’re strong enough to compensate for the
comparatively amateurish Taylor Lautner, portraying the perpetually shirtless
wolf boy, whose subtext remains the same scene to scene: Have you seen my abs?
Composer Alexandre Desplat (one of the best working in movies today) supports
the constant, abstinence-only yearning with an exceptionally subtle score.

In Meyer’s prose, every other sentence is “His golden
eyes smoldered” and “He continued to kiss my hair, my forehead, my
wrists … but never my lips, and that was good.” Stewart and Pattinson
get all that across without having to say any of it. Weitz and Rosenberg may
let the rhythm slacken in the final half-hour, but that is unlikely to matter
to any of the people who, with this film’s closing line, could be heard
squeaking in anticipation of the third Twilight, due in 2010.

Credits: Directed by Chris Weitz; written by Melissa
Rosenberg, based on the novel by Stephenie Meyer; produced by Wyck Godfrey and
Karen Rosenfelt. A Summit Entertainment release. Running time: 2:10.

MPAA rating: PG-13 (for some violence and action)