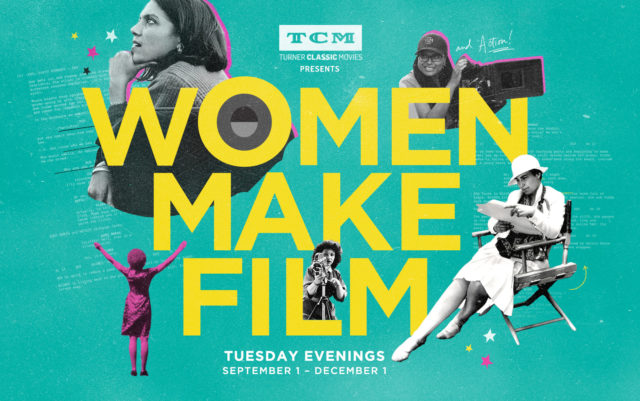 Running 14 hours and featuring the work of 183 directors, 700 clips and seven narrators, Women Make Film: A New Road Movie Through Cinema might be writer/director Mark Cousins’ most ambitious project to date.

“Many films about cinema feature only male directors, so this one is a repost,” Cousins said in a press release. “It is a film school, where all the teachers are female.”

“There are the great [female] writers, producers, actors, of course, too — but there is much ignorance and blindness about women directing film,” Cousins continues. “Our film will boldly challenge this blindness.”

When Women Make Film made its Colorado premiere at 2019’s Telluride Film Festival, Cousins introduced the documentary by holding up a stack of photos, each one a picture of a director featured in Women Make Film: Kinuyo Tanaka, a Japanese actress who worked with the great filmmakers of Japan before stepping behind the camera herself; Binka Zhelyazkova, a Cold War-era Bulgarian filmmaker whose 1961 We Were Young masterpiece sold over 2 million tickets in Bulgaria, but was forgotten elsewhere; Ukrainian Kira Muratova; French Sarah Maldoror; Belgian Agnès Varda.

“Some of those people you’ve heard of, and a lot of them, I’m guessing you haven’t heard of, even the movie lovers,” Cousins said. “The reason for this film is to change that.”

And change it will, thanks to TCM: Every Tuesday from Sept. 1 to Dec. 1, the channel will dedicate its prime time lineup to Women Make Film, one episode per week, 14 in all.

Women Make Film is not a chronological history, but a road trip through cinema’s forgotten past. The destination is the source of cinema’s Nile with Tilda Swinton, Jane Fonda, Adjoa Andoh, Sharmila Tagore, Kerry Fox, Thandie Newton and Debra Winger as traveling companions through 40 themes of cinema discourse. What’s more, many of these themes focus on cinematic technique, proving that the female gaze is not limited to what we see but how we see it.

Each episode of Women Make Film will be introduced by hosts Alicia Malone and Jacqueline Stewart, who will also present a handful of movies in conjunction with that week’s episode. Some of these films are featured in the documentary; some are not, but fit each evening’s theme. If Women Make Film is a 14-week film course, then TCM stacks the syllabus with extra credit.

Week one (Sept. 1) focuses on Openings and Tone and include two not to miss: Olivia, a French melodrama set in a girl’s boarding house so delightfully rococo you’ll want to bathe in Chantilly after seeing it, and Je tu il elle, a spare and seductive tale from Chantal Akerman, one of cinema’s true talents. Both movies present a lesbian lens of desire, but their execution and aesthetics couldn’t be more disparate.

TCM will also screen 1932’s Merrily We Go to Hell from Dorothy Arzner (the first woman admitted into the Directors Guild of America), the Mozambique-set Sleepwalking Land from Teresa Prata, Lina Wertmüller’s searing 1975 holocaust drama, Seven Beauties (for which she became the first woman nominated for a directing Academy Award), the Weimar-set Mädchen in Uniform from Leontine Sagan, and Lucrecia Martel’s debut about the rich going to pot, La Ciénaga.

Fasten your seat belts; it’s going to be one hell of a ride. Check womenmakefilm.tcm.com for information and schedules.