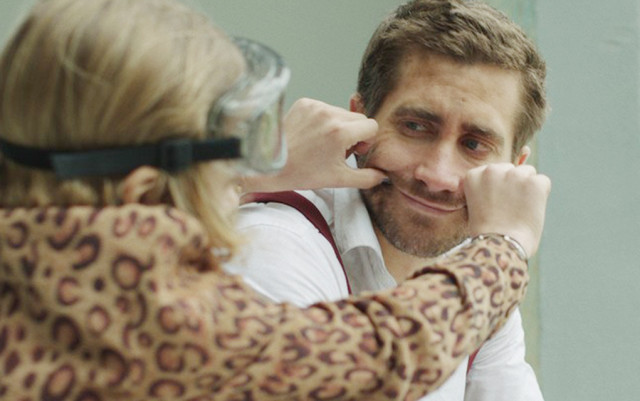 That line of thinking motivates director Jean-Marc Vallée’s latest film, Demolition, a movie that focuses on the self-destruction required to survive a tragedy.

Demolition opens with Davis Mitchell (Jake Gyllenhaal) and his wife, Julia (Heather Lind), driving to work. Julia tries to talk to her husband, but Mitchell’s mind is elsewhere: work, politics, the weather, an attractive waitress at the lunch counter he frequents, who knows. Whatever it is, it has him and his marriage does not.

Gone are the white-hot days of passion, the joys of discovery and that all-consuming feeling this person is the one. Their marriage has progressed to a stage where both parties take the other for granted. Their history is deep, their love is complex, but their attention is waning.

Then a car runs a red light and strikes them, killing Julia in the process.

Mitchell emerges from the accident unscathed, save for some of Julia’s blood splattered on his shirt and shoes. At the hospital, he tries to purchase peanut M&Ms from a vending machine, but as luck would have it, they get stuck. Some time later, Mitchell sits down to write a complaint letter to the vending machine company about his stuck bag of Peanut M&Ms and the situation in which he tried to procure them. But Mitchell doesn’t simply write a letter; he pours forth his heart and tells his story. He writes of Julia, of the accident, of his family, of his work, of his deepest thoughts and secret observations, of everything. Mitchell becomes a fountain of thought, one that moves fluidly through the interior and exterior aspects of his life. Vallée’s direction keeps pace with Mitchell’s stream of consciousness, building layers of observation on top of vast emotions.

Mitchell writes several complaint letters to the vending machine company, but these letters turn out to be the tip of Demolition’s iceberg. Though the movie occasionally teeters precariously on the edge of cliché — Mitchell does meet the woman (Naomi Watts) who answers his letters, he does have a falling out with his in-laws and he does self-destruct publically — Vallée and screenwriter Bryan Sipe manage to avoid pitfalls that would undercut their larger construct. Their focus is the aftermath, the grief involved and how complicated it is to truly move on.

That is because love, and the people we love, contain multitudes. The more Mitchell reflects on his marriage, the more he realizes how much he missed. Some of it was his fault; some of it was not. These truths must be unpacked before Mitchell can move on. But moving on doesn’t always mean moving past. The past is a companion that remains with us whether we want it or not. Resolution isn’t about leaving that past behind, but learning to walk hand-in-hand with it.