One of the great pleasures of living in Boulder is once again upon us with the 69th iteration of the Conference on World Affairs (CWA). For the uninitiated, the conference is a weeklong discussion of “all things conceivable” as the late, great Roger Ebert put it. Free and open to the public, CWA features 100ish speakers and performers talking business, politics, science, media and the arts on 200 panels. Some are serious, some are silly, but all are worthy of your time.

Of those 200 panels, one that draws significant attention year after year is Cinema Interruptus: a shot-by-shot dissection and discussion of a movie hosted by Chicago Sun-Times film critic Roger Ebert.

Ebert first came to the conference in 1970 and fell in love with the city, returning year after year to talk about anything that was thrown at him. In 1975, Ebert began hosting the Cinema Interruptus program and the popularity of the event quickly turned it into a cornerstone of the conference.

The Interruptus was a lively and engaging event. And not just because Ebert was a grade-A talker but because the audience was allowed equal participation. If anyone in the room saw something and wanted to chime in, they merely had to yell, “Stop!” and were given the floor. Sometimes the discussion completely changed the meaning of a scene, taking something that was once familiar and exploding it into something wholly new. Other times, the offered opinion was too much of a stretch to make much sense. Either way, it didn’t really matter if what was said was profound or silly, it was the act of participation that made the analysis exciting. CWA’s founder, Howard Higman, called it “democracy in the dark.”

In 2006, Ebert hosted his last Interruptus analyzing Robert Altman’s 1973 elegy The Long Goodbye. In 2011, the name of Cinema Interruptus was changed to honor the man who started it, but the format remains unchanged.

This year’s Interruptus host is another Chicago critic, Josh Larsen.

Currently, Larsen is the co-host on WBEZ’s weekly movie review radio show/podcast, Filmspotting; a critic and editor for Think Christian, a digital magazine on faith and culture; and a prolific writer with his years of criticism available on his website, LarsenOnFilm.com.

“In school, I was always interested in writing and obsessed with movies,” Larsen tells Boulder Weekly. “Eventually, the two kind of merged.”

He started at a local weekly paper while still in college, working as a reporter covering the local city council and community, in addition to a weekly film column. That evolved into a full-time career as a movie critic at a larger paper for a couple of years.

“Then things spiraled down back in reverse because the newspaper really started struggling,” he says.

Larsen managed to navigate the murky waters of the newspaper industry and found inroads through writing online and for the radio. Both display his ability to get to the beating heart of any movie and convey that understanding with engagement and joy — making his appearance at CWA all the more exciting.

“From my understanding of it, [Ebert Interruptus] sounds like a good mixture of leading a course but also fostering the sort of discussion and conversation we try to have on the show,” Larsen says. “And bringing a critical observation is something I’ve been trying to do since the beginning. … It definitely sounds like something that should be a lot of fun and hopefully I can bring some experience to the table.”

It doesn’t hurt that Larsen’s pick for this year’s movie is also one he claims he can dissect in his sleep: Wes Anderson’s 1998 comedy Rushmore. 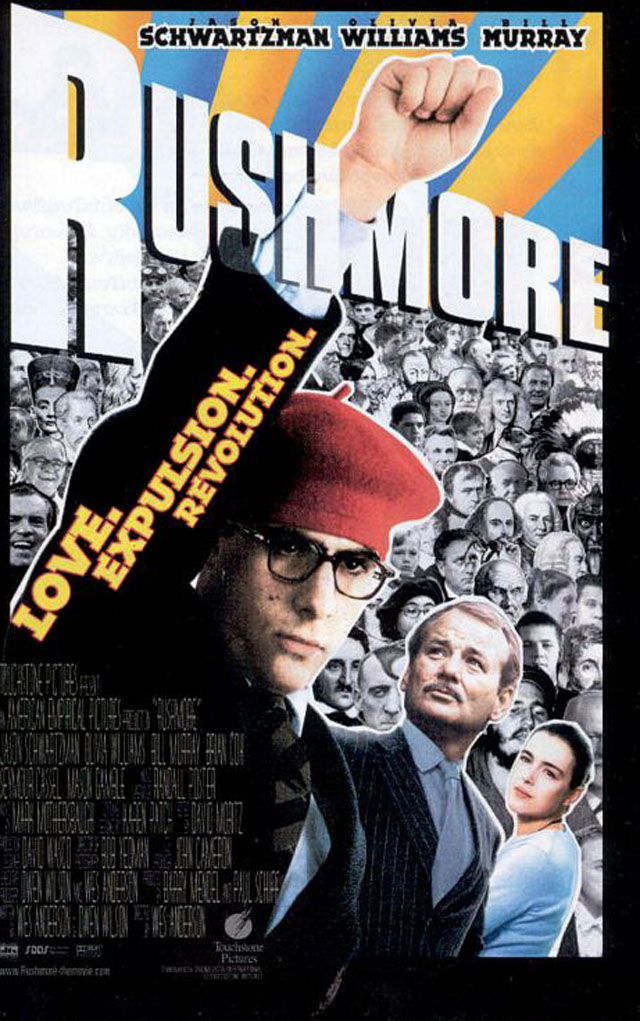 The film tells the tale of eccentric teenage-prep-school student, Max Fischer (Jason Schwartzman in his debut role), who is hopelessly in love with his school, Rushmore, and the new first grade teacher, Ms. Cross (Olivia Williams). Unfortunately for Max, Ms. Cross has also drawn the attention of a local industrialist millionaire, Herman Blume (Bill Murray).

Anyone who has seen a movie by Wes Anderson — The Royal Tenenbaums, Moonrise Kingdom, The Grand Budapest Hotel to name but a few — knows that his personal aesthetic lends perfectly for the Interruptus process. Anderson constructs these films with precision and each frame of Rushmore contains hidden gems waiting to be discovered.

“Those are the movies I always want to revisit; I think most people do too,” Larsen says. “The thing about Anderson is, the humor doesn’t just come from punch lines that you can memorize. Or lines of dialogue that you can say along with the characters. … It’s also in the visual composition, and it’s in the layers of comedy that are going on in any given scene.

“I think that’s what makes [Rushmore] ripe for something like the Interruptus as well, because that’s the whole idea, right? To look very closely, carefully, at every frame of what’s going on here. I can’t think of many filmmakers who are better suited for that than Anderson.”

Rushmore screens uninterrupted Monday, April 10 in CU’s Visual Arts Complex with some thoughts on the movie from Larsen. Then on Tuesday in Muenzinger, Larsen will host part one of the Interruptus with the second part held in Hale 270 on Wednesday. All three programs start at 3:30 p.m. and are free and open to the public.

Rushmore isn’t the only movie that will screen during CWA. Here are two more you won’t want to miss.

Equity — Thursday, April 13, 5:00 p.m., Old Main Chapel. Screenwriter and playwright Amy Fox returns to CWA with her latest film starring Anna Gunn as a investment banker trying to climb the corporate ladder while a previous investment threatens to ruin her.

Tower — Friday, April 14, noon, Visual Arts Complex. Few documentaries are this inventive and this engaging. Executive producer Amy Rapp will speak following this tour de force recreation and exploration of the 1966 shooting at the University of Texas at Austin.

Michael J. Casey is the chair of the CWA film subcommittee.