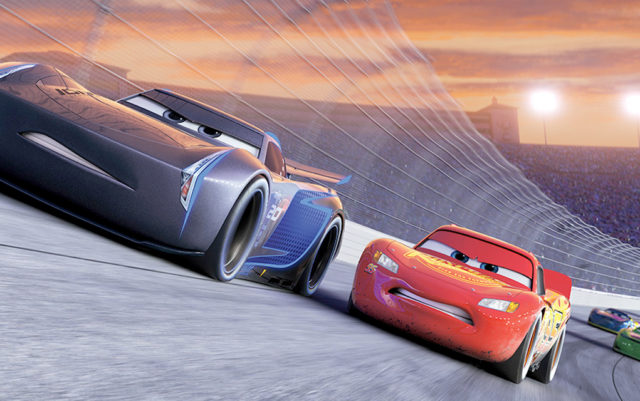 Speed. I am speed. Faster than fast, quicker than quick. I am Lightning.

You are until you’re not.

When racecar Lightning McQueen (voiced by Owen Wilson) showed up on the Piston Cup circuit, he was the rookie hotshot. Faster than the rest, McQueen shot his way up the standings with cocky arrogance. Then a detour through Radiator Springs and a chance meeting with former champ Doc “The Fabulous Hudson Hornet” (Paul Newman) taught McQueen to slow down, take life in and not race faster, but smarter. McQueen learned, and McQueen grew. Now he was not only capable of winning the Piston Cup but deserving of it as well.

Several years have passed since the events of Cars (2006), and though McQueen is still a champion racer, he is starting to have doubts. Even the mantra he recites before each race — “Speed. I am speed.” — brings him pause. Though he won’t admit it, he’s starting to feel his age. Like Doc, McQueen wants to hang up his Lightyear Tires on his own terms. But, like Doc, he won’t get that chance. The newer, faster, sleeker rookies will dictate his retirement with little ceremony. Such is the way of things.

Directed by Brian Fee, Cars 3 completely sidesteps the spy-caper events of Cars 2 and continues the mentor/student relationship of Cars with McQueen finding his way into Doc’s tires. McQueen doesn’t go willingly at first, but neither did Doc. No one wants to be told the world has passed them by, but it does whether they like it or not.

That next generation of racers is substantially faster thanks to a heavy reliance on metrics. Jackson Storm (Armie Hammer, more a presence than a character) tops out at 210 miles per hour on the track because he can hold the line providing the fastest route, leaving McQueen — a racer who relies on sheer talent and instinct — in the dust. Not exactly where McQueen wants to be, and he enlists the help of trainer Cruz Ramirez (Cristela Alonzo) and old-timer Smokey (Chris Cooper) to find a way to go faster. But while seeking speed, McQueen finds something more than just the thrill of winning. He finds his place in this new world.

That sounds a little like a schmaltzy Disney-fied message, but Pixar has a knack for presenting their stories with a healthy dose of pathos. Much like Inside Out, Up and Toy Story 3, Cars 3 understands that all things must pass. At some point, you have to get out of the way and let the generation behind through. Not everyone does, but those who do find news ways to participate and a new glow to bask in.

Though thoughtfully mature, Cars 3 is not top-tier Pixar. The story drags at times and some characters can be grating, but they cannot undo the charm of a visit to the sleepy town of Thomasville, the electricity of a demolition derby and the magnificent animation that makes talking cars look believable and the grain in the asphalt look real.