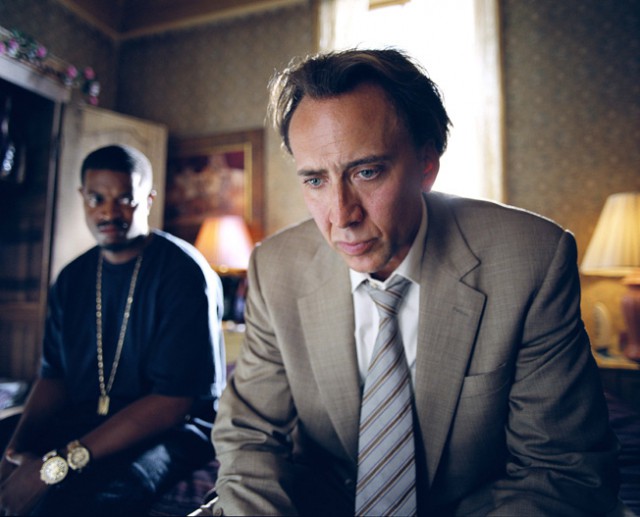 “Anything’s possible in this storm!” says the man with the badge in Werner Herzog’s delirious Bad Lieutenant: Port of Call New Orleans, a true feat of daring and one of the craziest films of the year. It’s a very loose remake of 1992’s Bad Lieutenant, in which director Abel Ferrara unleashed Harvey Keitel as a drug-addled spin cycle disguised as a police detective. The character of the drug-abusing cop, at work and play, has been relocated from New York to New Orleans, and in place of Keitel’s flaying fits of anguish, Herzog has found his ideal interpreter, a performer whose truth lies deep in the artifice of performance: ladies and gentlemen, Nicolas Cage, at his finest.

The storm the character refers to in the opening scene is a biggie: Hurricane Katrina. In the first scene of Bad Lieutenant, Cage’s Terence McDonagh dives into snake-infested, sewage-laced floodwaters to save a prisoner whose cell has been flooded. Is this a characteristic act of bravery or a rare exception to a rotten soul’s rule? It’s up to us to decide.

Herzog is obsessed with obsessives, and Cage’s character — like the movie — will work best with those who, like Herzog, have a natural antipathy for the rabble-rousing clichés of the vigilante-cop genre. The script by William Finkelstein provides the groundwork, plus some ripe insults and turns of phrase, but Herzog keeps repaving that groundwork for the better. The film is cracked, yet whole, and while I have no idea what a general audience will make of it, I also have no idea what a general audience is in the first place.

Some scenes, such as the waterfront encounter between Cage and Alvin “Xzibit” Joiner (as a gangster behind a multiple murder), could be taken from any ordinary crime movie. Other scenes belong to this film and no other. In one of his cocaine-induced hallucinations, at a stakeout, McDonagh suddenly sees a pair of iguanas on his coffee table, leading to the natural question: “What are these iguanas doing on my coffee table?” The other cops dismiss the non sequitur, casually — with McDonagh, even the sweatiest, most obviously chemically induced behavior is treated as just another day on the job in the post-Katrina mess. It’s one of the comic strengths of the picture: Even when he’s showing the audience things from an imaginary, metaphoric lizard’s point of view, Herzog’s film never tries to out-crazy the man in the middle of it all.

Shooting on location, Herzog gives the story a melancholy and naturalistic backdrop, which makes the hallucinations all the stranger. McDonagh’s father (Tom Bower), whose new wife ( Jennifer Coolidge) is a beer lush, struggles to stay sober with the help of Alcoholics Anonymous, and just when you think Herzog and company are going to play the family-crises scenes for laughs, they don’t — or rather they do and they don’t.

Cage can be tiresomely crazy in some films, but here, the minute he starts trashing a pharmacy out of sheer impatience to get his next fix, you know you’re in the company of the right actor in the right role. Early on, we’re told McDonagh has a bad back; by the time the picture has zigzagged to its midpoint, Cage is bent over and snarling like Richard III, with a badge. Then, for a while, Cage tries a new cocaine-, marijuana- and Vicodin-ravaged vocal delivery, alarmingly close to his adenoidal mole in G-Force. Somehow these strategies and effects add up. Cage’s instincts are on target in nearly every scene here, and to hear him mock a thug for his one-letter nickname, “G,” is to hear the very concept of sarcasm born again.

Port of Call New Orleans, which co-stars Eva Mendes as the coked-up call-girl lover of the antihero, reminded me of Orson Welles’ great Touch of Evil. Neither film really cares about who killed whom, or why. Their mixture of tones, from anguish to irony to grotesque slapstick to pathos, borders on the sociopathic or, at their peaks, the ecstatic.

Herzog’s achievement is far more modest than Welles’, but both swan dives into the cesspool ask the question: What happens when the enforcer becomes the exploiter? Without cheapening the memory of Katrina, Herzog sends McDonagh into a downward spiral in a city struggling to pull itself out of the drain. Ferrara’s ’92 Bad Lieutenant is steeped in Catholic guilt; Herzog’s is steeped in nondenominational hypocrisy. Cage is a gas; the movie’s a peculiar, lingering variation on the themes of corruption and addiction. Herzog has made a film to join his Grizzly Man and Encounters at the End of the World in a fruitful decade of obsessional portraits.

“Vampires are lucky,” says one junkie to another in the original Bad Lieutenant. “They can feed on others. We gotta eat away at ourselves.” Cage’s itchy portrayal, a more stimulating creation than his Oscar-winning portrait of a self-destructor in Leaving Las Vegas, sells that notion in every fiber — real and synthetic — of its being.

Our rating: Three-and-a-half stars (out of five)