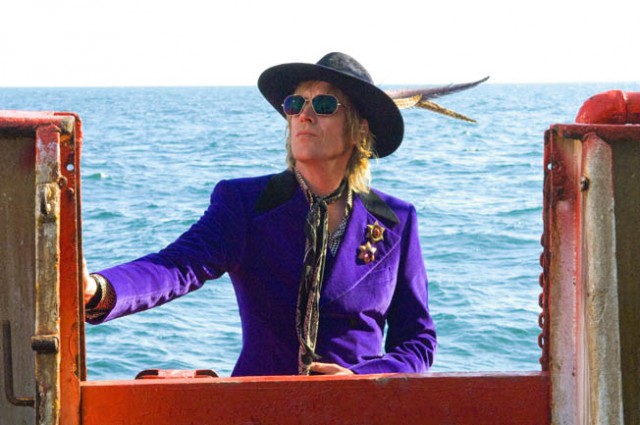 Any film that’s built around the music of the mid-1960s starts out with one thing going for it: a great soundtrack. That Pirate Radio goes beyond that and offers up an entertaining and poignant story about loss of innocence is what makes it a film well worth your time.

There was so much rock and roll coming out of Britain in the 1960s that the era is referred to as the “British Invasion.” What you probably didn’t know was that the BBC refused to play this “seditious” music and that the only rock heard on Brit airwaves was from pirate radio stations set up on old ships anchored off the coast.

That’s the basis for Pirate Radio, and the film, set in 1966, tells the story of the cast of DJs and station staff versus the government officials trying to shut them down.

The main character in the film is Carl (Tom Sturridge), a lost 18-year-old and the godson of dapper Radio Rock owner Quentin (Bill Nighy). Carl’s mum doesn’t know what to do with him, so sends him to spend a few months on the ship, under Quentin’s watchful eye. Problem is, the boat is a floating discotheque of sins, and everyone’s looking for “birds to shag,” drugs, smokes and every other manner of bad habit.

As Quentin says when Carl arrives, “Let me get this straight. Your mum sent you here under the assumption that the bracing sea air would sort you out? A spectacular mistake!” The group of disc jockeys at the station are quite colorful. The most popular is The Count (Philip Seymour Hoffman), an American who is a bit of a git and takes himself entirely too seriously, an anchor for the entire movie. I have to say, Hoffman demonstrates a range of emotions that few of the other characters in this film convey.

The Count is only the number one DJ because the real king of rock and roll, Gorgeous Gavin Cavenaugh (Rhys Ifans) had quit to go to America. When he returns, there are a series of funny one-upmanship scenes that culminate in a game of chicken that starts innocent but soon turns frightening. Neither can quit, and we see things spiral out of control — a game that captures the loss of innocence of the entire era.

Kenneth Branagh has a stand-out role as the completely uptight bureaucratic git Sir Alistair Dormandy, who is assigned by the prime minister (Stephen Moore) to shut down Radio Rock and all the other pirate rock ’n’ roll radio stations. He’s brilliant, and, indeed, the portrayal of the British government, particularly when contrasted with the common people who are fans of the radio station and music, is superb.

One of the running storylines is “young Carl” constantly trying to lose his virginity. Every other Saturday, women are allowed on board, and the subsequent scenes for the few station personnel that don’t “have a bird” are quite amusing. Carl, a virgin by circumstance, not choice, is finally set up with the lovely young Felicity (Katherine Parkinson), just to have her stolen away by the sly Dave (Nick Frost). All is ultimately not lost, however, or, um, all is ultimately lost, depending on how you want to look at it.

Pirate Radio is a fun, delightful, witty and affectionate look at the foibles and optimistic naivety of the ’60s, a sweet story of lost innocence, both individually and as a generation.