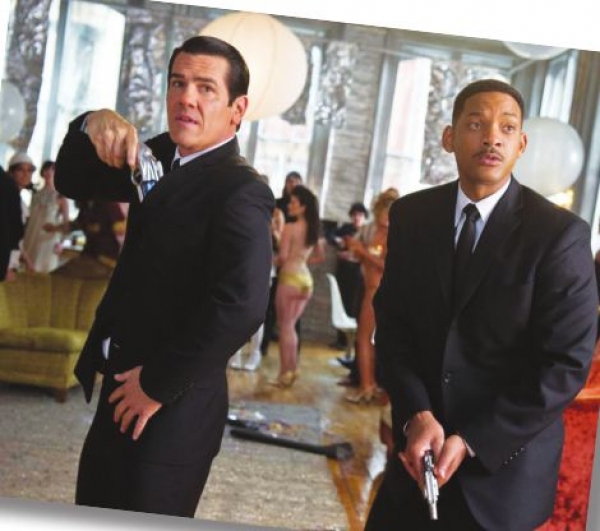 The first Men in Black (or MIB as our abbreviation-addled, advertising-driven society insists we call it) was just regular bad. But MIB2 was a very special kind of bad, the kind that comes from trying to replicate the box office success of the first endeavor to the point of soul-crushing, benign banality. So it was surprising to hear director Barry Sonnenfeld and writer Etan Cohen describe how they were returning with an MIB3 that would be filled with artistic, self-reflective commentary, a meta-analysis of society’s penchant for exploiting itself told through the lens of alien observers.

Just kidding. They figured the franchise’s box office piÃƒÂ±ata may not be empty, so they decided to whack its beaten carcass to see if any more coins came out. Working around Will Smith’s busy schedule of ensuring his children are big enough pop culture icons to be ridiculed in Internet memes, MIB3 fell victim to various delays and reshoots, which have long been infamous smoke signals that crap is coming.

Once more, Smith plays Agent J to Tommy Lee Jones’ Agent K, members of an organization designed to keep the general public unaware of aliens and to keep said aliens from destroying earth, which said aliens seem to want to do with some regularity. When a particularly bad bad die named Boris (Jermaine Clement) escapes from a prison on the moon, he travels back in time to kill a younger version of Agent K (Josh Brolin) in order to protect his species. J goes back to stop it.

The inclusion of Emma Thompson and Alice Eve as present-day and past incarnations of Agent O suggests that at one point there were subplots and things, perhaps ones in which women did more than smile and bend over. Those were likely jettisoned when someone pushed the reshoot button, but it really doesn’t matter much. Minor plot holes abound and originality is switched out for glib cleverness. And yet, it kinda works.

Why? Well, partially because of Smith’s gravitational charisma that has allowed him to stay uberfamous for decades despite having given us nothing of consequence.

Partially because supporting characters like Clement’s eyeless, gravel-voiced villain is super fun. Partially because Griffin (Michael Stuhlbarg) and his ability to see multiple timelines unfolding at once is the franchise’s first genuinely interesting and endearing character.

Do not take this for some affirmation of creative integrity. This is commercial whimsy being peddled to any and all who would be so inclined to buy it (with the added 3-D surcharge, if you please). Still, if art movies are defined by intellectual merit, summer movies are defined by fun. MIB3 is all spectacle, with its gloriously designed monsters crafted by Rick Baker. But it’s surprisingly delightful spectacle. The title of “best Men in Black movie” is akin to being named “world’s fastest sloth.” But if you’re in the race, you may as well win it, and MIB3 does just that.