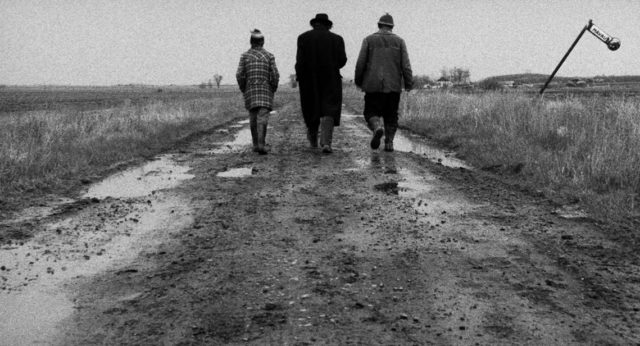 We must never lose heart. We have to have trust until our last breath. Otherwise, what will become of us?

Thanks to the pivot from physical to virtual theaters, CU-Boulder’s International Film Series (IFS) can extend its programming well beyond the usual spring semester. But there is a drawback: The crown jewel of every IFS calendar lies in its theatrical exhibition of repertory restorations.

Well, we can’t have the theater, but we can have the movies, and IFS has landed the rights to virtually screen the 4K restoration of the modern-day Hungarian classic, Sátántangó, an iconic work in the slow cinema movement, and one that rarely sees a home cinema screen.

Based on the novel of the same name by László Krasznahorkai, Sátántangó is what every book lover clamors for when they hear their beloved tome is headed for the silver screen. No scene is left out, and the narration is taken verbatim from the text. The result, a seven-and-a-quarter-hour story of a remote Hungarian village in October — just as the cold autumn rain starts to fall.

It rains constantly. The wind blows trash and dead leaves with hurricane force. The roads are thick with slippery mud, and everything looks cold. The faces of the villagers don’t look any better: Craggy, wrinkled and often inebriated. Even when they gather to dance in the town tavern, things get dicey. A drunk loudly tries to recount a story with the oral patter of Lawrence Ferlinghetti while the accordion player tries to drown him out with a repetitive melody. And a buxom wife tries to summon an ounce of jealousy from her husband. But he’s too deep into his cups to care. All of them are. Outside, the town doctor falls in the mud, and a young girl walks around with a dead cat and a box of rat poison. Casablanca, this is not.

And with a whopping running time of 450 minutes, Sátántangó might sound like punishment. It’s not. It’s stunning and intoxicating. You can’t look away, and director Béla Tarr won’t let you. The camera lingers on these faces and spaces, allowing the viewer to drink in every last inch of the frame. Sometimes the image is static. Sometimes the camera moves with ghostly ease. In both, longevity enhances engagement. You notice the way flies crawl across tablecloths, and the piles of discarded furniture shoved into the corner. Next to a character’s bed, a stack of crates holding liquor bottles. Are the bottles empty or full? Either way, what does that say about the character?

Most commercial cinema either compresses or telescopes time for dramatic and emotional purposes. Things that take a day are summed up in a minute. Other times, minutes are drawn out in triplicate. These movies grab the viewer by the collar and shake them awake with action and movement. Sátántangó does neither. It’s what many call “slow cinema,” a niche style of filmmaking that coolly leans away from viewers, forcing them to lean forward and notice more. What first appears to be gaps in the action soon become opportunities for wonder. You fill the spaces with your own thoughts, your own observations. It’s psychiatry at 24 frames per second.

Take the movie’s opening section: A wife is having an affair when her husband returns. The lover hides in the closet until the husband steps outside to relieve himself. As soon as the husband is out, the lover ducks out the door, crosses the street, and hides against a neighboring building. The husband finishes his business and returns to the house, noticing nothing. The lover then approaches the home and casually knocks on the door — he and the husband are friends. They are also in cahoots to steal a small fortune. Is the husband oblivious? Does he know and not care? Is he in on the charade? The mind reels with possible backstories.

Then, an hour later, the scene repeats, only this time from another character’s point of view: The town busybody who lives down the street. From his grungy window, he sees it all — the peeing husband, the lover ducking out and then heading back in. Up close, there’s elegance in the timing and geometry in the movement. From back here, it looks like two clumsy fools slipping in the mud. Both takeaways are correct, and Sátántangó doubles back on multiple scenes to illustrate its point: The distant past will soon be the near future.

When writer Susan Sontag saw Sátántangó in 1995, she said she’d like to watch it once a year for the rest of her life. She probably could too; there’s an awful lot to look for in a seven-and-a-quarter-hour film.

How should you approach Sátántangó? Watch it all at once? Take it section-by-section, 12 in all, like a black-and-white miniseries? Or use the two intermissions and break it into three two-and-half-hour movies? Dealer’s choice, really. If it were up to Tarr, you’d watch Sátántangó in one go. But you’re sitting at home, and you control the remote. Approach it the same way you would a good novel: As much or as little as you like until you’re done.

Rent Sátántangó at internationfilmseries.com. For more movie reviews, listen to Metro Arts on KGNU, Fridays at 3 p.m. (88.5 FM, 1390 AM and online at kgnu.org).