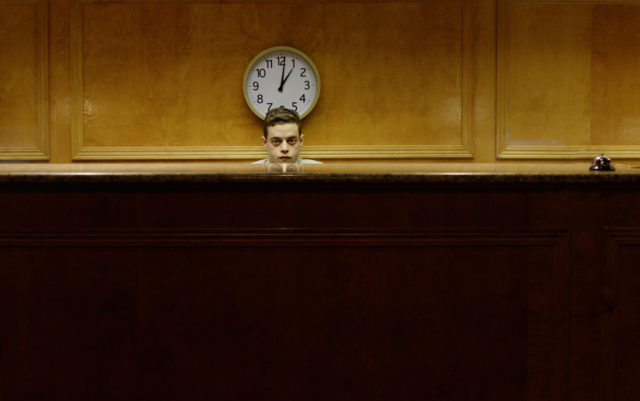 Two roads diverged in a wood, and I took the one less traveled by, and that has made all the difference. —Robert Frost

Buster (Rami Malek) just looks like he was born tired. Stuck working nights at a last-option hotel near the airport, he and his wife, Marty (Kate Lyn Sheil), are living with her mother while trying to save money to run off into the woods of Montana. There they will build a house and raise their daughter free from the trappings of society. Though Marty is a kind and caring mother, she no longer looks at her husband and his plan with optimism. Everyone’s load is heavy, but Buster’s seems a little heavier.

Or maybe it’s not. Maybe all of this is just a fever dream. As far as the audience is concerned, Buster isn’t even his real name. It’s a moniker given to him after one too many crazy phone calls to a radio station. Or maybe “Buster” is one of the two figures stranded in the boat we glimpse during the movie’s opening credits. There’s also the image of a clean-shaven Buster waking up in a remote and snowy cave; or Buster, bearded and unkempt, wandering through a house that is definitely not his. In every shot, Buster’s eyes are puffy and red. Either he has just woken up or desperately needs to go to sleep.

Written and directed by Colorado native Sarah Adina Smith, Buster’s Mal Heart draws the audience in with mystery and confounds them with unreliable narrators and non-linear storytelling. Her first feature, The Midnight Swim, dabbled in similar territory, but her sophomore feature is more assured, more mature. Buster’s Mal Heart is a dark movie with plenty on its mind and Smith hacks through this labyrinthine story to find the broken heart in the middle of this madness.

Buster’s Mal Heart begins to settle into a groove when a man who claims to be “the last free man on the planet” (DJ Qualls) shows up and starts spouting conspiracies about how people are slaves to the machine. Like any late-night drug and alcohol-fueled discussion, the already susceptible Buster becomes intoxicated by the man’s knowledge and the two of them hatch a scheme to steal jewelry from hotel guests. What bearing does this companionship have on the movie’s narrative? Not a lot and everything at the same time. Just as Buster is unsure of the Last Free Man, we are unsure of Buster. What are we to make of anything when we have no solid grounding to stand upon?

Much like Robert Frost’s unnamed narrator in “The Road Not Taken,” Buster has a choice to make and a road to take. The audience watching Buster’s Mal Heart must do the same. Settling on one path over the other will always lead to some level of regret. The hope is not to regret it, but live side-by-side with the consequences. Besides, it doesn’t really matter what road you take to get there, everything will eventually end in death.