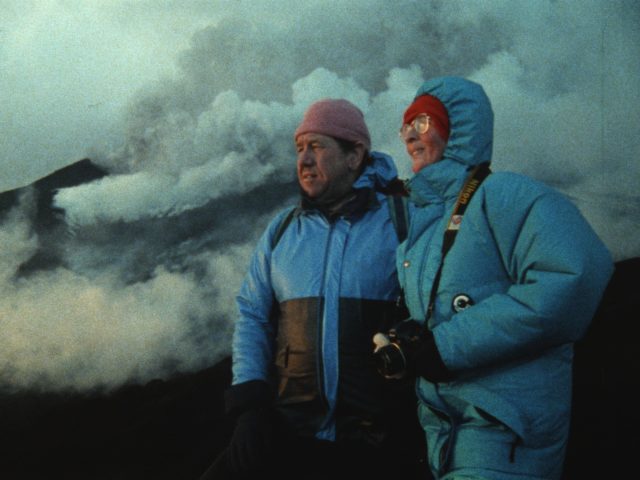 “We think of this film as a love triangle between Maurice and Katia, the volcano and the spirit of the French New Wave,” Shane Boris tells me over the phone. The L-word comes up a lot in our chat about Katia and Maurice Krafft.

Incredible is another perfect descriptor for the Kraffts. They were French volcanologists whose love for volcanoes was only surpassed by their love for each other. Rare are marriages this strong and obsessions this captivating. It’s what makes Fire of Love fantastic.

Directed by Sara Dosa and produced by Boris, Fire of Love is compiled from over 200 hours of archival 16mm footage shot by the Kraffts.

“We were just completely blown away,” Boris says. “[We] had a hard time conceiving of how anything could be better than the footage they shot and the story of their life that they told.”

And how they told that story is half of the fun. In hopes of attracting funding, Katia and Maurice brought cameras wherever they went to document their research. They became volcanology pioneers “because of the risk they were willing to take to get the most perfect shot imaginable,” Boris says.

Constructing Fire of Love primarily from archival footage is a bit of a departure for Boris. Born and raised in Littleton and a graduate of Colorado Academy, Boris turned his attention to documentary filmmaking after a chance encounter with a producer on a flight to India changed everything. That was over 20 years ago, and since, Boris has produced a dozen docs, including 2019’s Academy Award-nominated Edge of Democracy. Vérité is his métier, with stories developing in real-time. But, as is the refrain these days, the pandemic put a stop to that. That’s when Boris and Dosa, who were familiar with the Kraffts while researching their previous doc, The Seer and the Unseen, became aware of the treasure trove the Kraffts had compiled.

“Sara Dosa and our incredible editors, Erin Casper and Jocelyne Chaput, went through all of this footage,” Boris says. “Slowly trying to build the story of the film using the footage and the trail that Maurice and Katia left behind.”

The story they discovered was “chock full of interesting anecdotes, incredible footage and detailed explanations of the science of volcanology,” Boris explains. “But it was also replete with a tremendous amount of questions and unknowns—many of which we would never be able to understand.”

So they turned to the Kraffts’ written material and the photos left behind. Interviews with colleagues, friends and family followed. “But it still wasn’t enough,” Boris says. “We needed something else.”

That something else was narration. Enter Miranda July: “[Someone] who would approach it with the spirit of curiosity and attempt to get closer to a better understanding [of the Kraffts] and what they thought. Even with the recognition that we would never fully understand.”

For more, tune into After Image Fridays at 3 p.m., on KGNU: 88.5 FM and online at kgnu.org. Email: editorial@boulderweekly.com