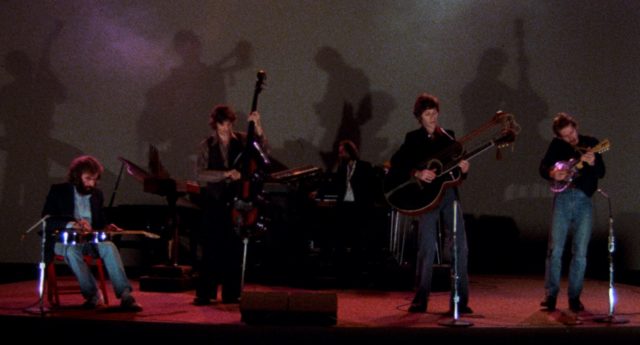 A master among masters, the filmography of Martin Scorsese is nothing to sneeze at. Raging Bull, GoodFellas, The Irishman—you know the lineup. But what sometimes gets overlooked are the documentaries, a dozen of them, personal and nuanced works that play like B-sides to his singles. Take the 1970s: Mean Streets shows the trappings of life outside the home, and Italianamerican brings that back to the living room. American Boy pairs hauntingly with Taxi Driver, but nothing matches the pound-for-pound grandiosity and excess of New York, New York like 1978’s The Last Waltz, newly restored and available on 4K UHD and Blu-ray from The Criterion Collection.

After eight years as one of the seminal backing bands in rock ’n’ roll history, Robbie Robertson of the Band decided to call it quits and wanted to go out with a bang, one last concert. The place: San Francisco’s Winterland Ballroom. The date: Thanksgiving Day 1976. A full dinner was served. An orchestra played while the audience danced. Then the Band took the stage and welcomed friends (Bob Dylan, Van Morrison, Muddy Waters, and on and on) for one of the greatest concerts ever. It was a seven-hour affair—the ’70s were nothing if not excessive—and Robertson figured if they were going to do it, they might as well record it.

Scorsese loved the Band and agreed something should be shot, if for no other reason than posterity. Maybe black-and-white videotape would suffice. Then they considered 16 mm film. Not good enough. Might as well use 35 mm. But why use one 35 mm camera when you can use seven? And why use standard camera operators when you can hire the greatest cinematographers of the time? Then Scorsese took the setlist and broke each song into storyboards so everyone would have a plan. Ever since Scorsese saw Powell and Pressburger’s The Tales of Hoffmann as a boy, he’d wanted to make a “composed film.” The Last Waltz might be his greatest success.

I don’t think Scorsese’s made anything with this much joy in it. Yes, there’s the music—Robertson’s raucous riffs, Levon Helm’s driving rhythm, Richard Manuel’s honky-tonk piano, Garth Hudson’s ethereal keyboards, and Rick Danko’s perfectly rock ’n’ roll vocals on “Stagefright” is transcendent—but there’s also the camaraderie. Scorsese is known for making movies about the corrupting influence of male bonding. And though Joni Mitchell, Emmylou Harris and Mavis Staples make an appearance, The Last Waltz is primarily a boys club. But watch how the one-upmanship of the performers is in service of the creation, not the creators. This stage pulses with everything but toxicity.

There’s an interesting dichotomy in Scorsese’s films. He makes spiritual works—movies of Jesus, of the Dali Lama, of missionaries—but his street movies might resonate with God just a little more. Same here. Watching The Last Waltz is like going to church. My proof: Watch the Band perform “The Weight” with The Staples Singers—if Mavis’ phrasing of the second verse doesn’t move you, I don’t know what will.

“The Weight” is one of the Band’s most recognizable songs. But here, Scorsese finds something new. Cutting between performers, the lights coming up and down behind them, the synthesis of image and sound, lyric and music that meld into something that can only be described in a single, solitary word—spoken by Mavis Staple, quietly under her breath so as not to spoil the magic—as the last note fades away: “Beautiful.”