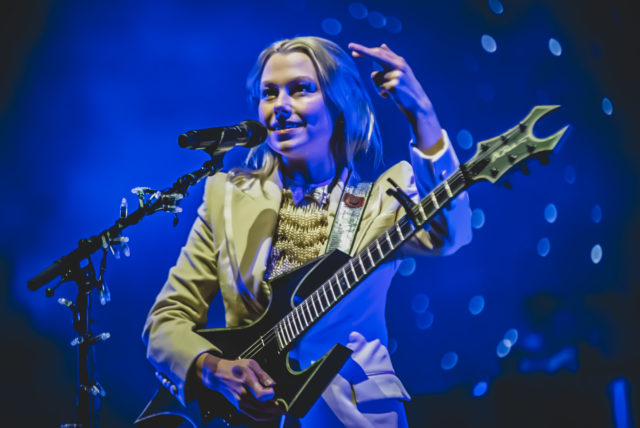 When my sixth-grader, Sidney, and I were biking home from school yesterday I started idly singing Phoebe Bridgers’ “Kyoto,” which has been one of Sidney’s favorite songs since we saw Bridgers famously smashing a guitar on Saturday Night Live and subsequently discovered her wonderful album Punisher backed up the angst with serious talent.

“Why is that song in your head?” Sidney asked, and I avoided the question before we had a quick dinner at home and I shared, on the way to Red Rocks, the surprise that we were about to finally see the 27-year-old California native, and four-time Grammy nominee, in concert.

Unlike the Olivia Rodrigo show we saw together at Mission Ballroom last month, proof of vaccination was required at Bridgers’ Red Rocks show—one of the first stops on her lengthy “Reunion Tour”—and the average age seemed more like 16 to 30 rather than 10 to 16. Approximately 5% of the crowd wore the glow-in-the-dark skeleton pajamas Bridgers and her band wore on Saturday Night Live, and as the opening act (Bridgers’ eccentric former band Sloppy Jane) took the stage, the lines for merchandise snaked all the way up both sides of the legendary 70-row amphitheater.

At 9:15 p.m., Bridgers and her band emerged to Disturbed’s nu-metal classic “Down with the Sickness” and the singer-songwriter—smiling big with dove-white hair, pale skin, in a white suit and black boots—walked down the stairs of a riser to the front of the stage and sang, “I hate you for what you did and I miss you like a little kid.” The first bars of “Motion Sickness” were met with screams just as intense as what Sidney and I heard at the Olivia Rodrigo show—the slightly more advanced age of the crowd just meant the pitch of the screams was lower.

Bridgers played guitar while singing most of the night—she played about a half-dozen different guitars—and her band was sporting those well-known skeleton pajamas while supporting her with violin, trumpet and more traditional rock instruments. The intermittently gentle, quirky, energetic and whimsical indie-rock swayed between lush and bopping for two hours.

“I’m nervous, so I fucked up the words—sorry,” Bridgers told the pulsing capacity crowd a few songs in, breaking her silence. “This is our biggest show ever, so thanks.”

“Her normal voice is so much lower than her singing voice,” my kid leaned into me and marveled.

But Bridgers’ inner voice is seemingly no different than what she sings. Some of Bridgers’ charm, and genius, is that virtually all of her songs come across as either poems or postcards or both. When she sang “Halloween” from 2020’s acclaimed Punisher, her second album, the power and appeal of Bridgers’ penchant for so often writing in the second person was clear as she sang “I can count on you to tell me the truth when you’ve been drinking.”

The outro to “Halloween”—a duet between Bridgers and frequent collaborator Conor Oberst—was sung with guitarist Harrison Whitford, whose dad is in Aerosmith, with the bandmates’ foreheads touching.

“I don’t know why, but I think they’re related or dating,” Sidney whispered to me.

Bridgers’ voice, not as childlike as the style Billie Eilish has made ubiquitous in female-fronted pop recently, yet pure enough to bring an audience to tears, was the star of the show—along with the actual stars. Her set, which featured animated pop-up books accompanying nearly every song, also featured stars and volcanoes and miscellaneous celestial scenes—including a giant moon to accompany “Moon Song.” I’ve been to nearly a hundred concerts at Red Rocks, and Bridgers’ set was by far the most beautiful—the first I’ve seen that could compete with the appeal of the venue’s almost overwhelming natural beauty.

“The pop-up books are such a good idea,” Sidney whispered to me just before Bridgers launched into “Kyoto,” the song I’d sheepishly sung on our bike ride home before the show.

“This one’s for my dad,” Bridgers said.

At one point Bridgers called out anti-choice activists, telling the Red Rocks crowd that anyone who tells a woman what she can do with her own body “can fuck off and die.” Her simultaneous intensity and irreverence is understandably appealing to teenagers, but lyrics like “I’m gonna look up from my phone and see my life” are also deeply poignant to anyone paying attention.

Bridgers concluded her Red Rocks show with “Waiting Room,” a slightly more saccharine rarity written and recorded when Bridgers was a teenager. As someone whose child is about to become a teenager, I was repeatedly heartened last night by Bridgers’ habit of placing breadcrumbs, or blatant signposts, within her songs in the form of references to artists like Motörhead and the Smiths, or even a knock on Eric Clapton.

When Bridgers sang “You pushed me in and now my feet can’t touch the bottom of you,” I couldn’t help but think of my kid’s interest in music, especially when I went to get us some popcorn and found that Sidney had written some thoughts on the show in my notebook.