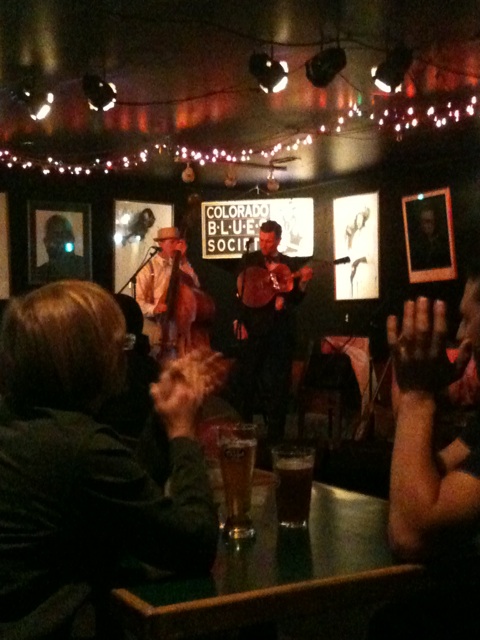 It’s rare to witness true music nerds performing. It’s even more rare to find music nerds who prefer hysterical swing and kazoos to intense sampling and laptops. That’s why people who are lucky enough to see the Two Man Gentlemen Band should know that the stars have aligned in their favor.

When Andy Bean and his bassist partner in crime Fuller Condon took the stage at Oskar Blues for their three-hour set on Sunday evening, their sound was obstructed. Screaming children, a classic restaurant problem, and technical difficulties, a classic concert problem, combined in a peanut butter cup of irritations for the band.

But these hiccups could not stop the acoustic duo as they had undoubtedly encountered many of them times before. The men played over the distractions until by only the second number, as the technical issues ended and the children headed for the door, the band was ready for some high-class, silly music with a dash of fantastic instrumentals.

Soloing is a key element of the Gentlemen’s act, and at Oskar Blues every song had a break for the men to flex their instrument’s muscles. Whether singing about our big and fat 27th president William Howard Taft, or how fun it is to get high on reefer, the men were consistent, synchronized and confident both in charisma and song.

Early on in the show, Aaron Keim of the Boulder Acoustic Society joined the show with his hollow-body electric ukulele to perform classic songs like “Frankie and Johnny.” The numbers were perfect for the Gentlemen’s 1920s folk-swing vocals, and they enhanced the show’s musical range between funny and serious.

I call this performance a “show” because it would be incorrect to call it a concert. Concerts are events that people attend to see a band. People at Two Man Gentlemen Band shows should go to be with a band. Band humor often suffocates in front of large audiences because there’s none of the intimacy that humor thrives on. In small venues, like Oskar Blues on Sunday night, the Two Man Gentlemen Band can connect with the audience on a deeper level than just taking requests.

After Keim left the stage, the band put on “Prime Numbers” while a man from the audience danced in front of the duo waving a shirt with the number 30 on it. Despite being informed by the band that 30 was not a prime number, the man continued waving the shirt around until the band played happy birthday for his friend, who, as we all learned, had just turned 30.

As the evening progressed, the duo became even more fast-talking, silly, and loveable. In fact, their vaudeville country swing became danceable to some of the audience despite the music’s humorous content. Some people at the show could be seen cutting rugs to songs about Franklin Pierce and love in relation to economics.

They were dance-worthy, laugh-worthy, and on top of it all, fantastically talented. Fuller Condon’s hands moved so skillfully on the upright bass you’d have thought he played it in the womb. The charm of Andy Bean’s smile, though undeniable, was nothing to the licks he produced with his four-string. The band’s solos between lyrics blended seamlessly despite their fast-paced mayhem.

The quick wit and tempo of the Two Men Gentlemen Band is extremely endearing in a small venue setting. Their extreme skill as musicians coupled with their utter charm and stupendous knowledge of how to work an audience made for a fine evening indeed.