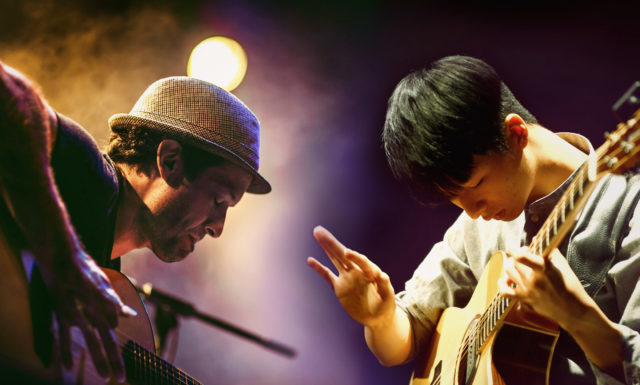 Midday in Brooklyn, and Trace Bundy is chilling after a “pretty much sold out” show the night before when Boulder Weekly catches up with him via the miracle of reliable cell service.

Sold-out shows are relatively routine affirmations for the former University of Colorado Boulder doctoral student and engineering professor. Combining a uniquely calisthenic two-handed technique and a keenly evolved instinct for percussion and juxtaposition of shimmering harmonic washes and melodic choreography, Bundy has created his own acoustic guitar ecosphere, reliant less on the catechisms of standard guitar lexicography like blues and bluegrass than on the instrument’s rarely-exploited tensile responsiveness. Picked syllables over harmonic sentences, tapped murmurs, two and three voice percussion underpinnings slapped or knocked on the body, multiple capos swapped in and out within a single piece.

Bundy’s disruptive imagination has gained him an international following, improbable only if one is cynical enough to dismiss internet sensations as likely to burn out and succumb to the cruelties of, y’know, doing cool stuff regularly, in front of live audiences. Bundy wouldn’t disavow his roots as an internet sensation, which is how he started — his self-hosted video interpretation of Pachelbel’s “Canon in D” gained so many hits that his internet provider fired him. The fact that he has expanded and deepened his technique and sells out shows in places we (and in some cases, he) has never heard of, testifies to the substance and enduring musicality of his iconoclasm.

On tour with him this fall is Korean guitarist Sungha Jung, who at the age of 10, saw Bundy’s “Canon” video and set to work learning it himself.

“I remember, I was up in Canada on a little tour,” Bundy recalls, “and this friend of mine says, ‘Hey dude, this little kid is playing your song.’ And I’m like, ‘No, c’mon.’ And so sure enough, here’s this little 10-year-old kid — and he looked like he was about 7 or 8, he was super tiny — going though the song, and he does it, he pulls it off.

“He got in contact with me via email or somehow, and when I went out for my first South Korea tour a year or two later, I asked him if he wanted to open for me and maybe play a duet. … They had two stools set up, and he was still so short his legs didn’t reach the floor. But it was great, it was surreal.”

Jung is 20 now, taller than Bundy, and a certified star in his native South Korea, a guitarist of impressive range and technical facility. Bundy has toured and collaborated with Jung several times since, and we can hear the satisfaction in his voice at being one of the young guitarist’s biggest influences.

“Man, he has become, in my opinion, one of the best acoustic guitarists around. … He plays with heart and soul; he plays blues and jazz, any other style of acoustic guitar. It’s just unreal, it’s been so fun.

“Hopefully I’ve influenced him over the years; now he’s influencing me.”

After Bundy’s Boulder Theater gig, he’ll be off to China again for a week-long tour, and we couldn’t help but wonder how he manages so much traveling with his beloved McPherson. Guitarists have historically traded in airline/guitar horror stories (Leo Kottke once advised us to get into the bombproof acoustic guitar case business — said we’d make a fortune), and Bundy says he owes profound thanks to some unknown Congressional lobbyist somewhere for easing him of the nerve-wracking stress of turning his bread and butter over to the tender mercies of airline baggage handlers.

“I’ve always had luck getting the guitar on the plane with me; I feel bad because I’m always ‘that guy’ who takes up a lot of space in the overhead. But in the U.S., after some airlines completely destroying some artists’ guitars, I don’t know if there was some guitarist or lobby group or what, but Congress actually passed a law that airlines have to allow you to try to get your guitar on the plane.

“It’s a first-come, first-served basis — if you’re the last one to board the plane, there may not be room. On international flights it’s a little trickier. When the price is OK, I’ll just buy a ticket for it. On my last European tour, it was two tickets: Mr. Trace Bundy, and Mr. Acoustic Guitar.”

On the current tour, Bundy and Jung played a regrettably timed two-date stand just outside D.C., in Vienna, Virginia. For a lot of people there, the night of Nov. 9th was a pretty glum occasion (Diamond Don won a mandate-affirming 4 percent of the vote there), and Bundy and Jung had the unenviable task of entertaining a theater full of people anticipating the end of civilization as we know it.

“I got in on the 7th, and we left a day open for Sungha to get there and readjust his clock a bit. And then all the election craziness the next day, and we had a show the next night. And yeah, you could just feel somberness about the whole crowd, it was very subdued.

“I just thought, y’know, we just have to put on the most joyful concert we can.

“And I think… I hope… everyone there left with a little smile on their face.”