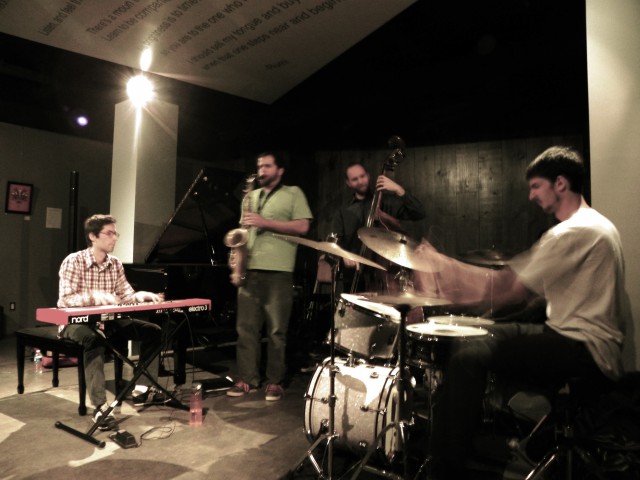 Trevor Anderies, one-fourth of the Los Angeles-based avant-garde jazz group Slumgum, sees the band’s current tour through Colorado as a trip into the past. The drummer was born in Denver and grew up in Castle Rock, studying swing techniques with area musicians, and though Anderies is now far removed from his bebop beginnings, he credits the vibrant jazz scene in Denver and Boulder with shaping his career as a musician.

Before moving away to attend the California Institute of the Arts in Los Angeles, Anderies learned the rudiments of jazz from Hugh Ragin, Ron Miles and other luminaries of the Colorado jazz scene. These early lessons form the base of his work with Slumgum — a bee-keeping term for the detritus left over from processing honeycomb — even if bebop lies a few layers below the group’s oddly structured tunes and reliance on anything but a standard swing drum beat.

“I was just encouraged and inspired by those guys as I was growing up,” Anderies said by phone while riding down the highway toward Santa Fe, N.M., the first stop on Slumgum’s six-night tour. “They’re really into supporting young jazz education, so there was a whole host of jazz musicians when I was growing up that came up under the wing of these musicians.”

While out on the road, Slumgum will play four concerts in Anderies’ home state, including a show at the Ceraso Gallery and Studio in Lafayette with pianist Art Lande on Thursday, Sept. 22. Lande is one of the biggest influences from the drummer’s early days in Colorado, and the pianist’s musical influence rubbed off to some extent on the other musicians in the group.

“He’s one of the best teachers all of us have had who really knows how to bring out the best qualities of a person in a human way and a musical way,” Anderies says.

The music on Slumgum’s sophomore release, Quardboard Flavored Fiber, is definitely harder to listen to than what many of Anderies’ first teachers play, but the sound isn’t as unpredictable or strange as what most people tag “avant-garde” music.

Saxophonist Jon Anderson eeks out plenty of multiphonic squeals, and pianist Rory Cowal and bassist Dave Tranchina help create a heavily dissonant harmonic language, but there is a purpose to the uproar. Tenderness, in the form of Anderson’s breathy subtone mixing with Cowal’s gentle piano touch, is as part of the group’s dynamic as loud, free-blowing sections. World rhythms pulse through the music in tiny bits, and there’s an underlying groove to most of the proceedings, even if that pulse gets thrown through a blender every few measures.

So how did a Colorado jazz drummer get involved in avant-garde music?

Anderies credits his study at the California Institute of the Arts, where he also met the other members of the band. Professors at the college encouraged Anderies and his friends to take musical chances. In Los Angeles, they moved beyond the standard approach to jazz education, which is seen by some to stifle creativity, and embraced being different. Each member of the group latched on to world music in addition to jazz — Anderies learned about Ghanaian drummers, while Anderson focused on the Hindustani and Carnatic forms of Indian composition — and these studies come across in the Slumgum sound.

“[The institute] was the type of environment where everything was encouraged and nothing was discouraged, which sometimes brought about the worst things and sometimes brought about the best things,” Anderies says. “It created a community where people were always willing to experiment and try new things and support each other rather than putting a front up about what they think is the right thing to be doing.”

But they’re not in college anymore, and Anderies will freely say that being a touring musician isn’t the easiest job, especially when the musicians are playing jazz with a few added quirks and wrinkles. The music, Anderies says, isn’t abrasive, but it’s still a struggle to get people to hear something new.

To supplement the meager income from gigs, the musicians are performing clinics at schools in the cities they visit. Every time Anderies helps open the ears of some high-school kid to a new sound, he’s helping pass avant-garde jazz onto the next generation.

“To see a younger musician’s mind go off and open their minds to a possibility that they never thought of” is gratifying, he says. “It can just take one sentence, and that could just set someone off in a completely different direction for the rest of their life. To have that ability to share that with someone is extremely special to all of us.”