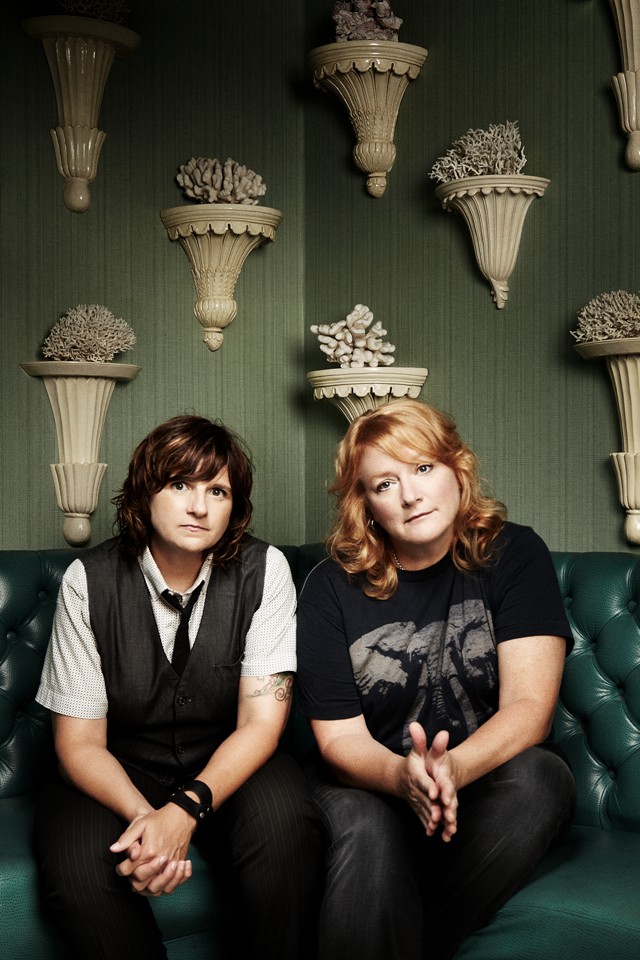 For more than 25 years, Amy Ray and Emily Saliers have toured the world and built an impressive audience as the Indigo Girls. Yet to hear Ray speak of her career, it’s clear she hasn’t forgotten where she’s come from. Perhaps that’s because she finds even physical ways to stay humble.

When the Indigo Girls come through Boulder this Sunday, June 10, Ray will still be healing after dislocating her shoulder while prepping to go on stage for a solo show. Yet she laughs when retelling the story and insists these things happen when you’re in front of people night after night.

“I did it a week ago. I was getting ready to go on stage and tripped over some cabling and just fell wrong and dislocated it,” she says. “I couldn’t play that show. Then a few days after that, I had rehearsal with Emily, so I just worked with the doctor on what I could and could not do. It’s actually not a bad position, the strumming position. I kind of lucked out in that way.”

Ray laughs after the last line and she quickly recalls her most embarrassing moment when asked for her favorite example.

“We played a really big show opening for Neil Young years ago, maybe 12 years ago, and I fell running across the stage playing some guitar thing trying to be cool,” she says. “That was embarrassing. I just fell with my guitar and everything. I was fine, but I was mortified.”

Ray will, of course, hope to avoid any such calamity at the Chautauqua Auditorium on Sunday, but she’ll have plenty of company on stage to help if the need arises. The Girls are touring with a full band these days, backed by the Atlanta rock act The Shadowboxers, who both open the show and provide full electric support through most of the show.

“They’re a rock band, but they’re really influenced by soul,” Ray says of The Shadowboxers. “They have that poppy soul thing, yet they are also influenced by the Beatles and Led Zeppelin and Steely Dan. They sing amazing three-part harmonies, so we asked them to be our backup band for this tour. We haven’t played with a full band in about six years, and these guys are just so much fun to play with.”

Fans of the Indigo Girls will see them perform in their typical duet arrangement about 25 percent of the show, but even Ray says she can’t predict what will happen. The Girls change the set list every night, so there’s no way of knowing how things will turn out. But hits like “Closer to Fine” or “Galileo” are bound to show up.

Ray says she and Saliers are focused on “giving the best live experience we can,” so they try to avoid being too self-indulgent. Yet they also change it up to keep themselves interested night after night. The balance that keeps everyone happy is something that has served the duo well for so many years.

“Some of the artists that I’m a fan of, I’ll watch three or four different shows on YouTube or something and you realize they say the same single thing every night right before the song,” Ray says. “They shouldn’t do that because now everyone knows it. But we’ve never been that kind of band, so it doesn’t really matter. We’ve never been professional about what we do, and that’s actually helped us.”

The full band sound should provide fans with a new, fresh glimpse of familiar Indigo Girls sounds, and Ray describes the collaboration with The Shadowboxers as “magical.” Even if it doesn’t seem like it should work.

“They could be my kids. They’re so young, but it feels like a peer-to-peer relationship, I’m sure, to them. These are fresh-out-of-college guys and we’re two older dykes, basically,” says Ray with a laugh. “It doesn’t seem like it would be a good combination, but it really works. We all really get along. Musically, it feels really magical to me.”