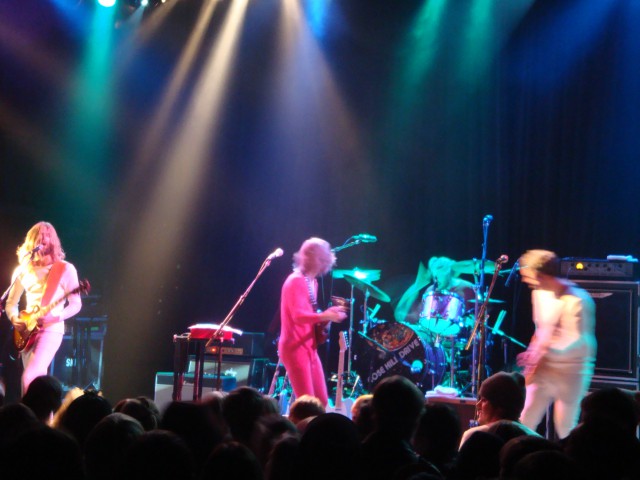 The
White Stripes rose above the scrap heap of early 2000s garage bands to become
the biggest rock ’n’ roll band of the aughts for two main reasons. First, Jack
and Meg White’s take on the delta blues is dirtier, heavier and more
emotionally raw than any band since Led Zeppelin. Second, the duo effortlessly
mixes their bombastic blues-rock swagger with achingly sweet, unselfconsciously
twee little folk ditties that provide balance and depth to albums that would
otherwise run the risk of sounding hollow amidst all of Jack White’s
tongue-in-cheek guitar god posturing. When Boulder’s Rose
Hill Drive announced they were performing the Stripes’ Elephant front to back for two New
Year’s shows at the Fox Theater, there was little doubt that the band would
crush murky rockers like “Black Math” and “Girl, You Have No Faith in
Medicine.”

The band is, after all, well-versed in sludgy blues-influenced
guitar solos and rock star bravado, making a name for itself with spot on cover
shows of bands like Zeppelin and The Jimi Hendrix
Experience. The true question was whether they would be equally adept at
handling the softer, sweeter moments that define the White Stripes almost as
much as all of Jack’s guitar trickery. Of course Rose Hill Drive was going to nail
the screeching guitars on “Seven Nation Army,” but could they capture the
tenderness of the acoustic ballad “You’ve Got Her In Your Pocket” or the
playful goofiness of the closer “Well It’s True that We Love One Another”?

Nuance
was never really Rose Hill Drive’s strength, but they were able to showcase
surprising versatility in tackling the many moods and sounds of Elephant.
Gamely performing in matching red and white long underwear (drummer Nathan
Barnes even sported pigtails, ala Meg), the band tore through the
punk-influenced garage blues of the albums opening three tracks with pitch
perfect accuracy. Lead singer Jacob Sproul has proven time and time again to be
a vocal chameleon, and he handled Jack White’s vocal mannerisms with ease. He
turned the mic over to brother Daniel for the softer songs, whose higher
pitched voice matched the vulnerability, if not the exact sound, of White in
his quieter moments. Freed from his vocal duties, Jacob was able to add nifty
organ work to a number of songs that provided a slight departure from the
source material.

If
there was a quibble with the show, it was that those moments of innovation were
rare. The addition of an extra guitarist and a bass player to the mix could
have given Rose Hill Drive an opportunity to place their own stamp on the
music, but bassist Jimmy Stoffer was left with precious little to do and aside
from adding a little flair to a few of the songs, the second guitar was often
underutilized to the point where you could question its necessity. It was a
minor trifle, however, as the was band better than expected on the quiet songs
and brilliant on the heavier stuff, with the seven-minute album centerpiece
“Ball and Biscuit” providing the highlight of the set as the Sprouls and
company attacked the double entendre-laced blues standard with just the right
amount of cockiness and gravitas.

Ultimately,
it was a killer set by a band desperate to prove they have more in their
repertoire than the one-speed guitar rock that dominated their self-titled
debut and the 2008 follow-up Moon is the New Earth. Opening
with a set of nearly all new originals, Rose Hill Drive proved that they indeed
expanded their sound during their 17-month sabbatical. The shredding solos are
still there, but now they are buffered by bouncy indie numbers, punky southern
rock songs and the occasional swirling psychedelic organs. There are still a
few wrinkles that need ironed out — a slow song included in the middle of the performance
was met with a resounding thud, and there was a bit of a disjointed feel to the
set, which is to be expected from a band still trying to figure out exactly
what direction they want to go in. But the group has exhibited an impressive
willingness to rebuild from the ground up, trimming away what wasn’t working
while adding extra depth to their songs. It was no coincidence that they performed
Elephant
to ring in the New Year. With that album, the White Stripes showed that you can
borrow from the past without being derivative, that you can rock out without
sacrificing subtlety, and that you can mix styles while still creating a
cohesive album. Rose Hill Drive may not have yet mastered all the finer points
that the White Stripes bring to the table, but in Elephant, they
seem to have found their perfect muse.