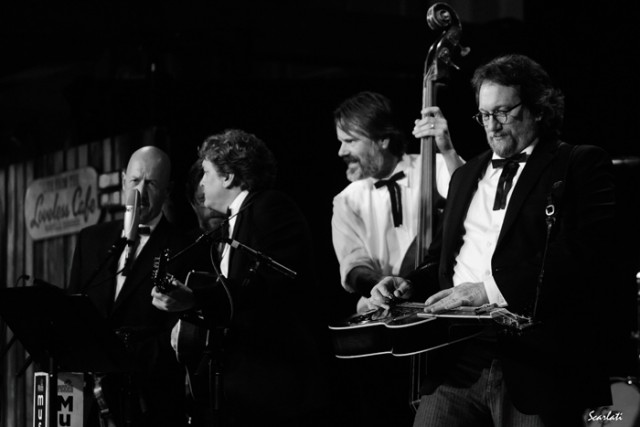 At age 58, dobro wizard Jerry Douglas has played on more albums than most people own. The number stands north of 1,600 and counting, having backed up everyone from Ray Charles to Eric Clapton to Dolly Parton to Elvis Costello. And that’s in addition to his 13 solo albums and membership in Allison Krauss and Union Station and many production credits.

So it’s not an exaggeration to say that Douglas has earned the ability to write his own ticket, creatively.

Which might make it seem curious that his new project, The Earls of Leicester, which will play Boulder Theater on Sunday, Oct. 12, is the sort of thing that many musicians embark on at the beginning of their career rather than once it’s reached cruising altitude: a tribute band.

“I always wanted to do an album of their stuff,” Douglas says of Lester Flatt, Earl Scruggs and the Foggy Mountain Boys, the iconic bluegrass group to whom he is paying homage. “I grew up listening to them. Pretty much night and day that’s what I was listening to.”

Scruggs, for his part, is as influential on the banjo as Douglas is on the dobro. So much so that the signature style of bluegrass banjo, in which melodies are inserted into rapidly picked arpeggios that roll through chords, is actually known as “Scruggs Style.”

And for him, that was a big part of the challenge.

“I wanted to see if I could really play the stuff,” Douglas says. “It’s a lot harder to do it right.”

Douglas had actually put off the album for a long time because he hadn’t found the right combination of players that could handle the material. More than just individual talents, he was searching for players that could emulate the ability to play together, to truly listen to one another as a band. “We’re not trying to blow the audience away with chops. We’re trying to create a band sound,” he says. “They had a choreography to their playing. If you heard somebody backing up the verse, for instance, usually that person was going to be taking the next solo. It was like a dance.”

That’s something Douglas isn’t sure the younger generation and all its mixing and recording technology quite gets. And he wants to give a history lesson.

“One of the missions of this whole project is to reintroduce it to a younger audience,” he says. “They didn’t get a chance to hear Earl Scruggs. They’re beginning to listen to Allison Krauss and Nickel Creek and not knowing where that came from. I think it’s more likely that they’d come and buy the record because my name is on it. They wouldn’t know who Flatt and Scruggs are. But they know who we are. We’re really beating the drum for them to go back to the old stuff.”

Douglas says a big component of that lost sound came from recording techniques. Instead of separately mixing every instrument in an isolated environment and mixing it later, The Earls of Leicester recorded everything live using vintage instruments crowded around vintage microphones, self-mixing by stepping forward when it was time for a solo.

“This way, everything was bleeding on everything else,” Douglas says. “That was just the way records were made back then. Those are some of my favorite records. Maybe they were primitive, or maybe they were ahead of time.”

Douglas says those largely lost recording techniques have been a casual research project of his for some time, and he’s used some of them previously.

Especially on his work for the O Brother, Where Art Thou soundtrack, in which he says the studio actually tracked down damaged vintage ribbon microphones to get a crackly, dull sound reminiscent of the time.

“The microphone I used back then looked like it had been through a fire, but it sounded great,” he says.

Douglas says that recording in that manner was a challenge, especially because the music can be so physically taxing to play.

“To make it all fit right, it’s like a big puzzle,” he says. “The instruments all have to fit together right.”

And they have to do it in only a couple of takes.

If Douglas wants to reintroduce those old tunes to a younger generation in the midst of a bluegrass revival, he’s certainly put forth an admirable effort. But the question is why he thinks it matters.

“I take a look at bluegrass today, and a lot of it sounds the same to me,” he says.

“I think that all musicians go through an evolution. They go around. It’s like a dial on a clock. It starts with the roots. Then it gets over to 3 o’clock. They improve on it. Then they start to water it down. And by the time it gets to 9 o’clock, it’s completely different, homogenized. We need to start over, to reintroduce the roots.”

And what better place to start than with Flatt and Scruggs?